Image // Unrated // February 24, 2009 // Region 0
List Price: $24.98 [Buy now and save at Amazon]
Review by Stuart Galbraith IV | posted February 28, 2009 | E-mail the Author
At times Super Speedway (1997), an IMAX featurette new to Blu-ray, plays like a super-condensed version of John Frankenheimer's underrated Grand Prix (1966), itself once a big Cinerama roadshow in Super Panavision 70. Though Grand Prix was a drama and Super Speedway is a documentary, the drama of auto racing - finding that little fraction of a second/extra quarter of a mile-an-hour edge to put you ahead of the competition, the dangers of the sport, the adrenaline rush of speed conveyed through spectacular you-are-there point-of-view shots - they're all there.

Directed by Stephen Low, Super Speedway uses its subjects well, intercutting two separate, very different but interrelated stories that come together for a satisfying payoff at the end. The late actor and occasional racer Paul Newman narrates the film; his Newman-Haas Racing Company had a stake in the film's subject, and Newman appears briefly onscreen at the end (along with David Letterman).

Like Hurricane on the Bayou (q.v.) this IMAX looks and sounds extremely impressive on Blu-ray. Like that title, just the trailers for other IMAX shows included on this disc all by themselves almost justify a blind buy. 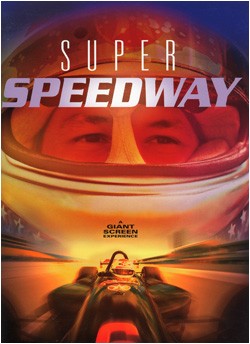 Super Speedway tells two stories at once. The first follows the design, building, test-driving and early races of racer Michael Andretti's Champ Car Lola during the 1996 season. Father Mario, the legendary racer, is on-hand every step of the way, offering sage advice, reflecting back on his own career, and expressing concern about his son's safety, particularly after another son of the famous racer was severely injured on the track several years before.

The other story involves the long and difficult restoration of Mario Andretti's 1964 roadster, an incredibly rare racecar given that so many cars (and their drivers) were lost over the years in these veritable death-traps.

The first-half of the picture follows the building and fine-tuning of the Lola Racing Car, which is much more interesting than expected, and also far more expensive and involved than many might imagine. The molding process, the use of wind tunnels (and fluorescent paint), and sophisticated crash tests make visually interesting subjects for the IMAX cameras, and Newman's narration is good: He describes the Lola as being like a scorpion "with an external suit of armor and very little internal skeleton." Later, Mario's 1964 roadster is described as a "vertebrae" with "a thin skin of aluminum." The design of these early cars made virtually no consideration for the safety of their drivers, and this is exemplified in some spectacular crash footage, some of it sourced from black & white 35mm film.

About halfway through the picture the money shots work their way in: the IMAX camera is mounted on the Lolas as they speed upwards of 240mph. This footage is very much like that in Grand Prix, with several different races from different locations and conditions (including, like Grand Prix, one race in the rain). Initially I was a bit annoyed at all the corporate logos, especially the two main conglomerates sponsoring Andretti's vehicle, but the filmmakers overcome this by using these logos as part of overall design of the film, and are framed in very interesting, graphic design sorts of ways.

The end of the film, with Mario reunited with his old car, is also visually interesting: Andretti speeds the newly-restored vehicle through the golden colors of the fall season, with the roadster stirring up the brightly-colored leaves like an airplane flying though the clouds. It's a memorable image.

Super Speedway was filmed in IMAX, a format that uses 65mm film run horizontally through cameras (a la VistaVision) during production, and 70mm film horizontally through special projectors for theatrical exhibitions, and huge frame size is the reason for the extreme clarity of the image. I'm not aware if the original film negative was used for this transfer, or whether some reduction element might have been sourced, but in any case the image is impressively sharp. The presentation is 1080p in 1.78:1 format; IMAX has a somewhat awkward theatrical aspect ratio of 1.44:1, but basically it looks just great.

The speedway footage improves slightly upon that in Grand Prix, but visually what's more interesting is the bright high-def colors of the race cars, the pit crew uniforms and the like, and the texture of the vehicles - with detail you just can't get on DVD.

Not surprisingly, the DTS-HD Master Audio 5.1 (with an alternate French and Spanish Dolby Digital 5.1 track but no subtitle options) takes full advantage of the sounds of the speedway, the roar of the crowds and of the engines, all of it impressively directional. The film also as an unusually good soundtrack of Juan Garcia Esquivel, Ry Cooder, and Matt Munro's "On Days Like These."

The disc is region-encoded A / B / C; in other words, effectively region-free.

By far the best supplement is a collection of 12 IMAX trailers, all in high-def, which are varied and all visually quite spectacular. (They really sell the shows; I'd now like to see 'em all!) As with Hurricane on the Bayou, there's a "Making of" Documentary, of interest mainly for its technical aspects, Movie Trivia Quiz, and text pages on the filmmakers, etc., and the disc is BD-Live Ready.

I'm not big on cars and confess I volunteered to review this just to be able to show it to my car-nut father one of these days, and was therefore surprised how much I enjoyed it and how interesting the technical aspects of racecar design are. Visually, it's spectacular in the usual IMAX sense, and all-in-all, this is a Highly Recommended disc.