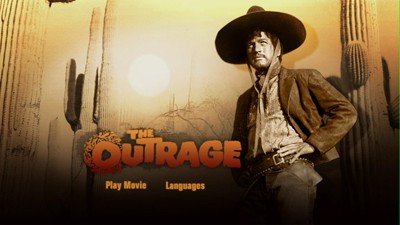 Hollywood was all over Akira Kurosawa from the get-go. Not in the "We revere you so much we're going to import your movies" sense, but in the "No good idea is too good for us to think we can do better but most likely ruin" sense. Quite a few of his more famous samurai action pictures have been turned into quite a few westerns with a variety of results. Yes, it's hard to believe, but one of cinema's greatest directors was treated the way Hollywood now treats foreign horror movies: grist for the remake mill. Though I knew that a ton of different productions had ripped off the basic Rashomon concept of one story told from multiple yet conflicting points of view, I didn't know anyone had ever had the cajones to remake the 1950 classic in its entirety. Turns out there was a stage version written by Fay and Michael Kanin, and it was even filmed for television twice (including once by Sidney Lumet) before Martin Ritt decided to turn it into a full-fledged film in 1964. The Outrage placed Rashomon in a remote outpost in the post-Civil War American West, and it's a surprisingly obscure effort given that it's both Ritt's and Paul Newman's follow-up to the Oscar-winning Hud.

Then again, maybe it's not so surprising. When I worked in video retail, a customer once told me that he had a theory that the more stars there are in a movie you've never heard of, the worse that movie is likely to be. In addition to Newman, The Outrage stars Edward G. Robinson, Claire Bloom, William Shatner, and Laurence Harvey. It's not exactly a Cecil B. DeMille Greatest Show on Earth ensemble, but that's a pretty solid roster. Not exactly no-names, though not exactly A-List--just as The Outrage is not exactly awful, but not really a classic either.

The story of The Outrage pretty much follows the Kurosawa model: three men gather in a desolated area and end up discussing four different versions of one terrible story. In this case, Shatner plays a preacher who is waiting for a train at a rundown station in hopes of catching the next trip out of town, his faith in humanity shattered along with his belief in the absolute. Waiting with him is the downtrodden prospector (Howard Da Silva) who wants to convince him not to go and a conniving huckster (Robinson) in hiding lest the people he ripped off find him. The day before there had been a trial for a crime perpetrated against a traveling couple. As the verdict stands, the notorious outlaw Juan Carrasco (Newman) raped Nina Wakefield (Bloom) and murdered her husband, Colonel Wakefield (Harvey). At least, that was how Carrasco told the story, but Mrs. Wakefield had a different version and a medicine man (Paul Fix) who heard the Colonel's dying testimony delivers a third. Though Carrasco's past crimes made him an easy conviction, the truth seems lost somewhere in all the variations.

Turns out, there is a fourth version, one known only by the prospector, who as far as the court knows only found the body, but who in reality tells the preacher and the con man that he saw the whole thing from the bushes. Yet, there are reasons to doubt his version, too, as his self-serving secrecy undermines his credibility. The con man's cynical worldview may be the truest of all, that humans are suckers and liars. It makes a certain level of sense, especially when you consider that each person's scenario is more favorable to them. Each teller of the tale is a winner of sorts in their own version. Yet, that is also the most obvious interpretation, and Kurosawa's Rashomon provokes a much deeper response. Truth is not merely subjective, it is also unknowable. How each of us lives is dictated by how well we can reconcile ourselves with that principle. 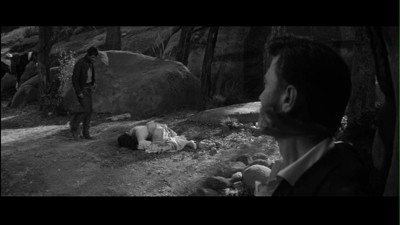 Martin Ritt and the Kanins (Michael Kanin is credited with adapted screenplay) don't entirely remove the grander meaning for The Outrage, but their fourth act ends up being a rather fatal misstep that comes across as far less convincing and far more blatant than Kurosawa's Rashomon. While the first three stories, the ones told by the bandit, the wife, and the husband, are fairly accurate to the Japanese film, the prospector's version is portrayed as first a broad Southern melodrama before descending into a slapstick fist fight between Paul Newman and Laurence Harvey. The rape is suddenly treated like a punchline, and the decision to change how the Colonel dies in the prospector's story also makes it seem like a cruel joke, a misfortune perpetrated by the indifference of the universe. If the prospector's tale in the real truth, life would then be a B-movie rather than a human tragedy.

The acting is all very good up until that last story, too, with everyone playing his or her roles with the appropriate gravitas. The switch is so severe for the prospector's story, you almost have to wonder if it was all cooked up following a rather wild party and everyone was too drunk to be operating such heavy machinery. Even Shatner kept most of his hammy tendencies in, though at times this early performance already shows signs of his trademark delivery (in terms of speaking style, he's kind of the Christopher Walken of his day). I'd actually give the top acting marks to Edward G. Robinson as the sharp-talking roadshow salesman. The veteran actor is the most comfortable up there on the screen of any of them, and his skills as a raconteur serve him well.

The Outrage is part of the "Paul Newman Film Series," the new line where Warner Bros. is apparently digging through their vaults for films maybe Paul didn't want on DVD while he was alive, in addition to ones he was likely a bit more proud of and maybe should have been released already, their dubious commercial appeal be damned (on one hand, we have the disastrous disaster pic When Time Ran Out...; on the other, his directorial effort Rachel, Rachel). I'd be curious to hear how Newman reflected on the time he played a Mexican, with dark make-up and all (what is that? tan-face?). To his credit and the credit of his Actors Studio training, he buries himself in the part with the same amount of respect he would give any other role. Though I suppose some could grumble about his accent and gruff voice he adopts (did he study Treasure of the Sierra Madre in lieu of a dialect coach?), he largely manages to avoid racial caricature. In fact, the writing seems to be informed by an awareness of how the Mexican people might have been viewed at the time and includes allusions to racism and shows Carrasco playing at being a stereotype to lure Col. Wakefield into his trap (indeed, even relying on the white man's greed). Beyond the voice and the make-up, I don't get the sense that Newman would have played it any other way if his character were a white bandit named Carson rather than a Mexican one named Carrasco.

If there is one compelling reason to watch The Outrage, it's the sure-handed direction that Ritt displays for most of the movie, as well as the beautiful photography by James Wong Howe (The Sweet Smell of Success). From the rainy railway station that provides the story frame, the waiting men looking like an early test version of the trio at the station at the start of Leone's Once Upon a Time in the West, to the open desert and the way the people crowd into the town square to witness Carrasco's trial, Ritt and Howe use the wide open spaces of the West to show how remote this little pocket is, how isolated the pioneer is from polite society. They capture every gorgeous detail, every cactus and every raindrop, using the Panavision process to its full limits. In contrast, the little oasis where the crime goes down is softly lit, like a pocket dimension within the greater frontier. The Outrage is a gorgeous movie, tightly edited by Frank Santillo (who also worked with Peckinpah on his more thoughtful movies), an expertly constructed movie from start to finish.

But a technical triumph is still only as big a victory as the script allows, and alas, there is no way around the pitfalls of The Outrage. While the first sixty minutes are very good, if a bit unnecessary given the existence of the Kurosawa original, the final thirty are a terrible blunder. There is little reason to watch a flawed version of Rashomon when you can just watch Rashomon--and that you can take as the absolute truth in a world of wishy-washy opinions. Anyone who says different is either lying or wasn't really there! 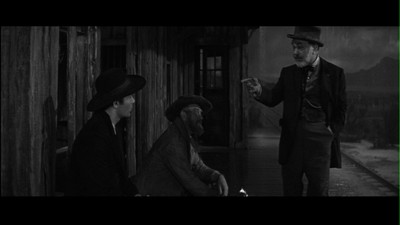 Video:
As noted above, The Outrage was shot in black-and-white in Panavision at a 2.35:1 aspect ratio, making for a rather wide picture. The anamorphic widescreen transfer maintains that sizing and is virtually spotless. I saw no digitizing, no stray print damage, and no layer shift. It's a great looking DVD, meaning its biggest selling point--the photography--is on display in all its glory.

Sound:
Warners releases this DVD with the original English soundtrack in a basic mono mix. The foundation of the mix is very good, without any hiss or metallic tones, but the volume levels did fluctuate slightly throughout the movie, making some scenes slightly harder to hear.

FINAL THOUGHTS:
How Martin Ritt and Paul Newman went from the awesome Hud to a remake of Akira Kurosawa's Rashomon is probably a tale as full of conflicting versions and confusing truths as the source material hoped to portray. At its best, The Outrage is a movie we've already seen, and at its worst it is a movie that seems to have forgotten that there was a pretty good map to follow to get where it was going, so why stray from the path? The cast is very good, including Newman taking a surprisingly credible stab at playing a Mexican, and the cinematography may be some of the best I've seen in a black-and-white western. These things, unfortunately, are not enough to compensate for the movie's misguided final third. If you haven't seen Rashomon, get it instead; if you have seen Rashomon, consider watching it again; if you must see The Outrage, I'm sad to say, Rent It. 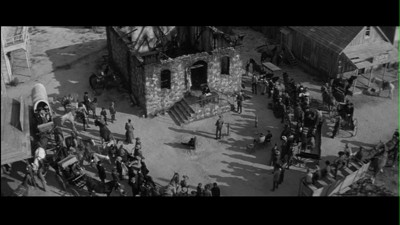