Wonder Woman has always been a bit of an anomaly.  The character has never been a top seller but she's been around for a long time and survived some major slumps in the comic industry.  While Superman, Batman, and other major league characters stared multiple comic books back in the 40's the Amazonian really only had one.  Yet when super hero comics imploded after WWII ended Wonder Woman continued to be published while other top-tier characters such as The Flash, Green Lantern, and Captain America disappeared.  Part of the problem is that writers rarely get a good handle on the character.  A lot try to tailor her superheroic activities to girls, who aren't nearly as interested in the battlesthat make up man comics as boys, and others ignore the fact that she's a woman all together.  (For a good look at the character, check out William Messner-Loebs run on the title.)

DC's newest direct-to-DVD animated movie, simply titled Wonder Woman, falls into some of the traps that the comic is prone to do.  Beginning ending with long and fairly bloody battles that won't please the young girls in the audience, the movie also has the star spouting (infrequent) feminist statements seem out of place and dated.  Even with these flaws though, it's a fairly entertaining piece that just doesn't manage to hit the high mark it aims for. 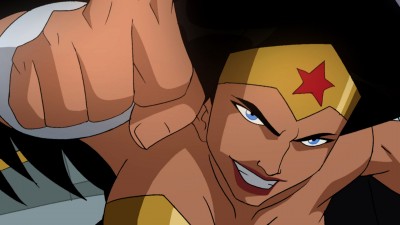 Centuries ago the armies of Ares, the God of War, were engaged in battle with the Amazons and their queen, Hippolyta.  It was a brutal scene with both sides taking heavy casualties.  The battle only ended when Hippolyta killed Ares (and her own) son, and was about to end the life of the war god himself.  She is stopped by Zeus, and instead of being killed Ares has magical shackles attached to his wrists that make him all but human.  Hera then grants the Amazons their own paradise, the island Themyscira, located in the Aegean Sea but which is hidden from the rest of the world.  There they can live in peace away from men and guard the god they hold captive.  After a time, Hippolyta beseeches the gods for a daughter and from a sand likeness she creates comes a baby, Diana.

Centuries pass and the ageless Amazons live in peace until a jet fighter pilot, Steve Trevor, crashes on Themyscira.  Deemed to be no threat to the female warrior race, Hippolyta holds a contest to see which of her subjects will escort Trevor back to "the world of man".  (Why?  Can't anyone take him back to New York City and drop him off?)  The victor of the challenging contests in none other than Hippolyta's daughter Diana.

Just as she's about to leave, it is discovered that the guard on Ares cell has betrayed her race and let the god go.  Free in the human world, he plans to have his shackles released and then start a war that will wipe out most of humanity.  Such a war will fill him with so much energy and power that he'll be able to attack Mount Olympus itself and become ruler of the gods. 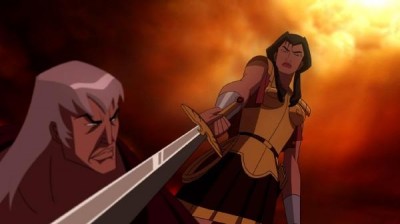 There's a lot that works in this film.  Origin stories are often interesting, and this one manages to keep viewers attention even though it's nearly half over before Wonder Woman appears in the costume that we all recognize.  Showing the Amazon's life on Themyscira provides a nice background for Diana yet never drags, and once Steve Trevor shows up the narrative picks up speed nicely.

Diana's first adventures in New York City are fun and light, it's especially fun when she and Steve are confronted by a gang of muggers, but when Ares rears his head things start to become a bit too grand too fast.  Ares as he was portrayed at the beginning was a formidable foe, but for some reason they thought they needed to amp up his abilities for the finale.  This leads to more than one deus ex machina moment, all of which had me rolling my eyes.  Minor Spoilers:  Ares suddenly has the ability to raise the dead??  Where'd that come from?  And the Amazons, who have the technology to make an invisible jet, take wooden sail powered ships from the Aegean Sea to Washington DC just as Ares starts to attack?   It would have taken them weeks to make the journey, they would have to have left before Diana and Steve did.  And if they are happy being separated from the world of man, why did they have a fleet of ships at the ready?)

There were some problems with the way Diana was portrayed too.  When Steve first takes her into his office, a secretary starts to flirt with him.  Diana makes a short women's lib speech about how our society is brainwashing women into thinking that they can't do anything for themselves.  This might have been true in the years before WWII when the character was created, but with the current and past administration in the US having female Secretaries of State, the feminism sounded a little dated to say the least. 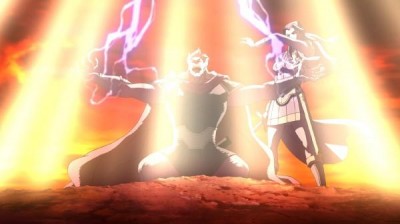 The animation was generally very good.  Everyone had nice and fluid movements and the action scenes played out well.  The main problem I had with the art was the lack of diligence that went into some of the scenes.  The air battle that ends with Steve Trevor being shot down didn't look realistic.  Planes don't move the way they are depicted, and they don't float either.  (Steve's plane lands smoothly in a river and then skids sideways to a halt near a beach, floating there while Steve gets out.  Just how did he put that spin in at the end?)  The climactic battle in Washington DC takes place near several monuments, but the artist who drew the Vietnam memorial hadn't ever seen it and apparently didn't bother to look up any pictures.  The do get kudos for getting the geography of the area right though.

The only other complaint I have is with the voice acting.  Keri Russell plays Diana and she just does an okay job.  She never sounds heroic or forceful in her delivery and she never really makes the character her own.  There were too many times that I thought she was just reading her lines as best she could, rather than really believing what she said.  That's too bad because Nathan Fillion (or Firefly fame) did a wonderful job as Steve Trevor, sounding like a playboy pilot who could be serious when the situation demanded it.

The disc offers both TrueHD 5.1 and Dolby Digital 5.1 audio tracks and I employed the TrueHD for my screening.  The sound design was very nice during the battle scenes.  With sounds of war coming from all directions it was very engulfing.  Unfortunately after the swords were laid down the film seemed to devolve into a stereo mix.  There wasn't much in the way of incidental sound effects being thrown to the rears or much use of the sound stage during the less intense section.  The low bass wasn't employed as much as I was hoping, even during the fights, but this is a minor complaint.  Overall this was a good sounding film with the dialog being clear and easy to hear.

The 1.78:1 AVC-1 1080p transfer looks pretty good too.  The colors were very vivid and bright, and the lines were tight.  A lot of the scenes on Themyscira were rendered rather nicely and looked beautiful.  Posterizating (banding) was a pretty big problem in parts however.  Aside from that aliasing wasn't visible and other compression artifacts were nonexistent.

The set comes with a good number of extras that are pretty average.  First off there's a commentary track with Bruce Timm, DC Creative Affairs VP Gregory Noveck, director Lauren Montgomery, and writer Michael Jelenic. It was okay, with some interesting information about the production in general and the character in particular.  Next up are two Wonder Woman featurettes:  Wonder Woman: A Subversive Dream and Wonder Woman: The Daughters of Myth (both run about 25 minutes.)  These were interesting looks at the character though some of the people who spouted a lot of psycho-babble had no idea what they were talking about.  It was interesting to hear Denny O'Neil and some of the other writers discuss her character.

There's also a look at the upcoming Green Lantern animated movie.  I was excited to watch this, it was the first extra I played, but it ended up being pretty empty.  The ten minute piece looks at the history of the character from the Golden Age to the 70's or so (ignoring that post-crisis crazy Hal Jordon story) and then shows some roughly animated storyboards.   I was hoping for a bit more.

Finally there are four episodes of Justice League:  Paradise Lost parts 1 and 2, Hawk and Dove, and To Another Shore.

This was a good effort that produced an okay movie.  There were some problems with the script, especially at the end, which made it a little bit hard to really embrace the film.  My 12 year old son, who generally enjoys superhero movies and the animated Justice League adventures wasn't enthused either.  As he said "it wasn't a waste of time, but I don't think I want to watch it again."  I agree.  This would make a good rental.