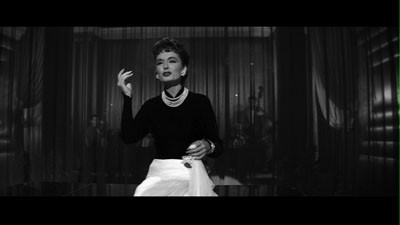 I think Jazz Age torch singer should be on any list of the most dangerous jobs a person could work, because judging from the films done about the various hard-case chanteuses over the years, it's an occupation that comes preloaded with enough irony to drive even the most stalwart of ladies to drink. Do you sing about love and heartbreak? Well, here, have a nice dollop of your own.

Ann Blyth stars as the title singer in The Helen Morgan Story, a Prohibition and Depression-era songstress perhaps best known for originating the role of Julie in Showboat. Morgan was a small-town girl with no family to call her own, but with a voice that could melt the heart of just about anyone who heard it. The film tracks her from her early days taking any singing gig she could get through her New York success. Her efforts are backed by two men she wanted to love her but could never do so in the way required, a married lawyer (Richard Carlson) who wouldn't leave his life for her and a bootlegger (Paul Newman) who wouldn't give up his gangster career. The narrative trek ends in the mid-1930s, with Helen crawling in and out of a bottle, apparently stopping at a convenient point where the singer was getting things back on track before everything fell apart again. Happier is the ending when the singer is still singing rather than dying an early, booze-soaked death.

Made in 1957 and directed by Michael Curtiz (Casablanca), The Helen Morgan Story already has a feeling of been there and done that following in the wake of other biopics about similar singers, including the Doris Day vehicle Love Me or Leave Me. The quartet of writers who labored over this screenplay seem at a loss to find what made Helen Morgan unique beyond her signature songs, and the studio whitewash seems intent on keeping out of the more squalid details of what really happened. This makes for a largely flat movie that only spikes whenever a musical number comes up. Morgan's real-life piano player does a turn as himself here, and singer Gogi Grant provides Helen's voice, though Blyth's own singing voice was reportedly much closer to Morgan's. Despite lip synching, Ann Blyth sells each and every performance, capturing the emotion of each painful lyric on her face.

As evidence of that aforementioned irony, singing seemed to be the only way that Morgan could every express what she was feeling. The rest of the time, she kept most of her feelings bottled up, either inside her or trading it for the hooch that came in external bottles. In this, Blyth also shines, portraying the decline of the kind-hearted singer with a brittle, fragile delicacy that makes it all the more saddening that this was the last feature Blyth made, moving from The Helen Morgan Story to a spotty television career. Without her, there would be no movie.

The rest of the characters are underwritten, familiar types. Paul Newman is fine as Larry Maddux, the low-level gangster that both used and helped Helen and couldn't really see any difference between the two. Newman is solid, but the script doesn't really call on him to stretch out all that much. Instead, we get a kind of generic version of the Paul Newman tough guy. He's sort of bad, but not all that bad. His third act redemption might have meant something more had he been a little more hateful.

Special note should probably be given to the art direction of the movie, which was headed by John Beckman (Monsieur Verdoux). The night clubs and speakeasies look fantastic, and there is a starkness to the outdoor sets, including the rain-soaked carnival where we first meet Helen and the rundown bowery where she ends up, that lends some grit to the otherwise safe proceedings. The movie was shot by Ted McCord, the lensman for such classic films as The Treasure of the Sierra Madre and East of Eden. He lights The Helen Morgan Story so there are heavy shadows, portents of the dark cloud that follows its subject around.

All in all, The Helen Morgan Story isn't a bad movie, just a startlingly average one. Perhaps had it gone a little deeper into the real story rather than keeping its subject at arm's length, it could have set itself part from the pack as a stronger entry in the genre of tragic singer biopics. Instead, it's like the bootlegged liquor that flows freely through the film--out of the same bathtub as all the rest and thus indistinguishable as any particular vintage. 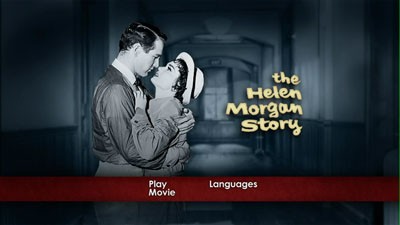 Video:
Shot in Cinemascope at a 2.35:1 aspect ratio, this anamorphic transfer is pretty good but not without its subtle problems. Though the black-and-white photography has decent tonal values, you may notice that the details in the back of the shot aren't very sharp. There is also occasional surface noise as well as some flickering that crops up from time to time. It's a serviceable job, but quite a bit shy of perfect.

Sound:
The mono mix of the original English soundtrack is really good, with clarity in the dialogue and a healthy boost during the musical numbers. French subtitles and English closed captioning are also included.

Extras:
None whatsoever, not even a trailer. Some biographical featurettes about Helen Morgan and Ann Blyth would have been awesome, but alas, there is nothing. This disc is as barebones as it gets.

FINAL THOUGHTS:
Apparently there is a common trajectory to how a lot of singers in the early part of the 20th century got their breaks, because I've seen quite a few movies with tales similar to the one related in The Helen Morgan Story. Though Ann Blyth's portrayal of the torch singer is fantastic and the songs Helen Morgan made famous are undeniable in their power, the rest of the story comes off more like crib notes for a better biography. Part of Warner Bros.' "Paul Newman Film Series," The Helen Morgan Story isn't even that great of a Newman picture. He's good but unremarkable in a role as familiar as everything else in this picture. Rent It. 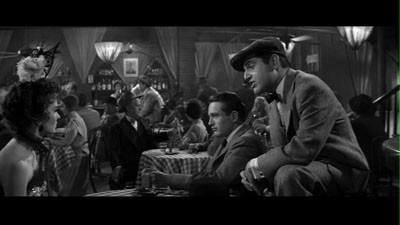