Sony Pictures // PG // February 17, 2009 // Region 0
List Price: $28.95 [Buy now and save at Amazon]
Review by Stuart Galbraith IV | posted March 4, 2009 | E-mail the Author
Though it won numerous Academy Awards, including Best Picture, Best Actor, Best Supporting Actress, Best Director, and Best Screenplay (Adapted), Kramer vs. Kramer (1979) is the kind of movie that should be on Blu-ray but which studios presently seem reluctant to release. It's not flashy visually or aurally; the high point of its Dolby TrueHD 5.1 mix is the sound of a telephone ringing off-camera.

But it's also a terrific movie. Though European films had for years been analyzing failed marriages and, occasionally, their effect on children caught in the middle, American movies until then had almost never dealt with such raw and painful emotions. Though it starts off a bit too pat, its simple story gathers steam and, especially for anyone who's ever been through this situation or has children, Kramer vs. Kramer packs enormous emotional weight.

The Blu-ray maximizes the film's uncluttered, ordinary look (though reportedly a look based on the paintings of David Hockney and Piero della Francesca); mainly its extreme clarity helps the actors and the nuances of their performances. Disappointingly there's but a single extra, but it's a good one, a nearly one-hour making-of documentary created for an August 2001 standard-def DVD release. 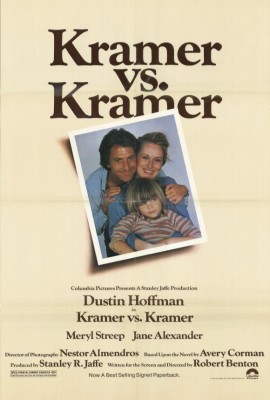 After eight years of marriage, unhappy New York housewife Joanna (Meryl Streep) abruptly walks out on her workaholic ad executive husband, Ted (Dustin Hoffman), and their seven-year-old son, Billy (Justin Henry). The film follows Ted and Billy as they try to readjust their lives to a world without Joanna, which is further complicated 18 months later when Joanna suddenly reenters their lives.

Kramer vs. Kramer doesn't start out all that well. Hoffman's distant husband and his high-pressure career in the world of Mad Men was a clichéd characterization by 1979, having been done to death in the years following the influential Patterns and The Man in the Gray Flannel Suit. Ted might have worked any one of dozens of high-pressure jobs; making him a rising star at an ad agency with a big account at stake is just a bit too pat.

Another problem with these early scenes is that Hoffman is too sensitive an actor to completely bring off such an initially insensitive character. He's not bad, but you can see the acting. A famous early scene has him trying to make French toast for Billy - their first breakfast without Joanna. The morning is a disaster but it's overplayed, with Hoffman as short-tempered and accident-prone as Moe Howard of the Three Stooges.

From about 20 minutes into the film onward, however, as Ted and Billy grapple with their anger and longing for Joanna, their initial resentment toward one another and gradual acceptance, and finally deep father-son love and bonding, Kramer vs. Kramer is right on the money, emotionally real as few films are.

I was frequently annoyed when fathers and mothers would yammer on endlessly about shifting and newfound emotions once a person becomes a parent, and the responsibility and innate protectiveness, etc. that one instantly, instinctively acquires. But then I became a parent myself, and boy howdy it's true. For instance, there's a scene in the film where Billy falls from a jungle gym at a part, and severely cuts his face, almost losing an eye in the process. It's the kind of dumb accident that can happen at any time and which is really nobody's fault, but for Ted and his neighbor-friend Margaret (Jane Alexander), also a parent, it's utterly traumatic.

Forget The Texas Chainsaw Massacre - the abject panic in Ted's eyes as he literally runs all the way to the hospital and then sits with his boy , terrified, as his face is stitched back together, is far more upsetting than any horror film - and the raw emotions of this are conveyed to the film's audience. Funny, scenes like this didn't used to affect me at all.

Kramer vs. Kramer was praised at the time for its even-handedness; Streep's character is selfish and initially irresponsible, but sympathetic. Though already a fast-rising and enormously respected actress, this was her breakthrough role and she's as good as Hoffman. (The studio must have thought the Best Actress competition too fierce, and campaigned for her in the Supporting category - against, ironically enough, Jane Alexander. Streep deservedly won, but despite her absence for much of the film she absolutely is on equal footing with Hoffman in their scenes together, and her presence is strongly felt when she's not around. If that was a supporting performance my name is Fred C. Dobbs.)

Both Streep and Hoffman were given enormous latitude by director Robert Benton, who adapted Avery Corman's novel. Both actors extensively rewrote their dialogue to make it more emotionally authentic, and some of the film's best moments were improvised or substantially adjusted on the set. Hoffman's scenes with Henry are outstanding; Hoffman blurs the lines between a performance and confession, and it's the kind of work where through his acting the audience can read myriad unstated complex emotions.

Kramer vs. Kramer is a 1080p presentation billed at 1.85:1 but actually 1.78:1. Following the grainy '70s Columbia logo the transfer gives way to an accurate rendering of DP Nestor Almendros's soft colors and subtle lighting. The discs menu screen's are annoying: every time you press a button, sound effects like body blows in a Shaw Bros. martial arts film ring out. I'm just selecting an audio format; I can live without all the loud "Fwaaaap-Fwaaaaps! and Crunch-crunches!" every step of the way.

The audio has been remixed to Dolby TrueHD 5.1, but except for some direction sound effects, this title isn't likely to blow out your speakers. The region-free disc includes similar mixes in French and Portuguese, and a 5.1 Dolby Digital mix in Spanish, along with optional English, English SDH, French, Spanish, and Portuguese subtitles.

The hour-long Finding the Truth: The Making of 'Kramer vs. Kramer' reminded me of the grand old days of early and great laserdisc featurettes. It's a good show - informative and interesting, and most of the key participants are interviewed. A BD Live function is included.

Kramer vs. Kramer grapples with complex issues and emotions in ways even less likely in a mainstream Hollywood film today than in 1979, conveyed through four outstanding performances that drip with authenticity. The Blu-ray disc captures the film accurately and the single extra covers the film's production and legacy thoroughly. Who could ask for more?