Mighty B!: We Got the Bee, The 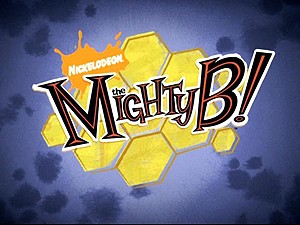 
The Show
Every now and then, a kids cartoon arrives with a cache of coolness that expands its audience beyond the little ones, capturing the imagination of hipsters, stoners and adult geeks as well. You've got your "Spongebob Squarepants," your "Powerpuff Girls," your "Yo Gabba Gabba," and now, "The Mighty B!" The main appeal here is one of the show's creators and the voice of the show's star, the one and only Amy Poehler, late of "Saturday Night Live" and one of the founders of the Upright Citizens Brigade. Her serious comedic chops adapt surprisingly well to kids programming, and she brought some cool pals to the party, with an impressive voice cast enhancing quality writing and animation.

The Mighty B! surprisingly isn't a character in the show, technically, since the star is Bessie Higgenbottom (Poehler), a Honeybee (think Girl Scout) living in San Francisco, with more drive than your usual little girl. She wants to earn every merit badge available, as legend says the Honeybee who achieves this feat will become The Mighty B, a superhero of great power. She's aided by her brother Ben, her angry dog Happy, and her (sweetly retarded) Honeybee friend Penny, as she takes on any challenge head-on, normally in the form of snooty fellow Honeybee Portia and her sidekick Gwen. These are the animated Mean Girls, and they don't particularly enjoy "Messie" (as they refer to our heroine) and her special brand of undeniable enthusiasm, the kind of positive energy that allows her to roll her head over her shoulders, from one hand to the other. 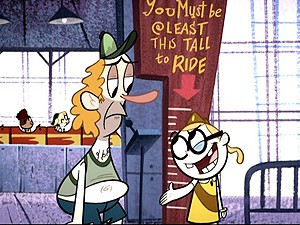 Among the storylines here, in the usual Nickelodeon four-pack of episodes (which allows for eight individual stories,) Bessie aims to ride a giant rollercoaster, only to be held back by her meagre height, babysits for a quintet of brats, builds a robot and crashes bar mitzvahs to enjoy the associated good times. A quick scan of those topics should make it clear, there aren't many limits to what Bessie can and will do. It helps thatPoehler makes just about anything Bessie says hilarious, through her goofy, lisping voice and raucous go-go personality. In giving voice to this unique, bizarre little world, she's joined by Dee Bradley Baker (as Happy), fellow "SNL" star Keenan Thompson (as cool skate dude Rocky,) Andy Richter (playing her brother Ben,) her former UCB partner Matt Besser and several animation vets including Grey DeLisle and Dannah Feinglass. They combine to create a really fun, silly time that boasted two Phil Collins jokes in one episode and a character that's just a face drawn on a finger.

The show's look is equally important in making the show stand out, as it features a pretty stylistic design with hyper-exaggerated anatomy and nice touches like painted stills and lots of artistic detail. You can see what seems to be touches of influence from names like Jay Ward, John Kricfalusi, Craig McCracken and Everett Peck as you pick through the episodes, with the flat retro-style hand-painted backgrounds, pop-art emphasis effects and incrediblyexuberant faces that offer the viewer nothing but joy. It's not hard to look at an episode of this show and be reminded of "Ren & Stimpy ," and in all good ways, because that series' manic sensibilities are evident here, just in a more family-friendly way. It's the rare show that makes me laugh, while enthralling my daughter, instead of just not boring one of us. 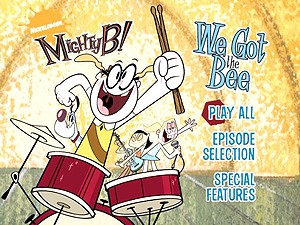 The DVDs
The one-disc release is packed in a standard keepcase, and features a static full-frame menu offering options to play all the episodes, select stories and check out the special features. There are no audio options, no subtitles and no closed captioning.

The Quality
The full-frame transfers on these episodes look fantastic, capturing the color and detail of the show without an issue. There are some impressive graphic effects used in the series, like the trees during Portia's run through theforest in "Bee Afraid," and the DVD reproduces them nicely, without any dirt, damage or digital artifacts.

The Extras
Finally, there' a Nickelodeon animation DVD with some real extras. Up first is a fluffy promotional piece for the series that runs about three and a half minutes, and introduces the creators and main voice actors, through interviews and behind-the-scenes footage. Getting to see more of it, especially the time spent in the booth recording, would have been much appreciated.

A full animatic for "Bat Mitzvah Crashers" is up next, offered in a split-screen format, so you can see the final animation and the planning stage. It's a solid presentation, but will appeal mainly to the hardcore animation geeks. It's followed by the final extra, a karaoke version of the The Pretty Pretty Princesses' "Running with the Rainbow Unicorn," from the episode "We Got the Bee." The song is presented with and without sung lyrics, so you can belt out along with Portia and Bessie. 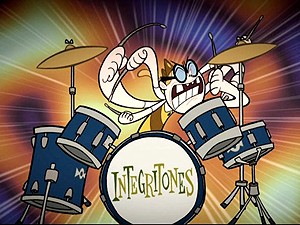 The Bottom Line
For a show obviously aimed at young kids, "The Mighty B!" has a twisted sense of humor that will appeal to older viewers as well, making the series a good choice for family viewing fun. The DVD looks and sounds terrific, while, for once, supplementing the usual small number of episodes with some actual, for-real extras. Check it out, whether you're a parent or not, as it's an enjoyable bit of silly, all-out goofball comedy.