Warner Bros. // Unrated // February 17, 2009
List Price: $19.98 [Buy now and save at Amazon]
Review by Stuart Galbraith IV | posted March 10, 2009 | E-mail the Author
The phenomenally successful film versions of Quo Vadis (1951) and The Robe (1953), particularly the latter, which cost $4.1 million but earned rentals of $17.5 million, inspired other studios to produce their own religious epics. The Silver Chalice (1954), released a bit more than a year after The Robe launched the CinemaScope revolution, is chiefly remembered today as Paul Newman's embarrassing big screen debut. He famously took out ads when the film made its network television debut in 1966, urging people not to watch it, and the fact that it had all but disappeared in the last 25 years suggests Newman may have even used his influence and bargaining power with Warner Bros. to have it pulled from general distribution for a time (though it has turned up on television here-and-there). In any case, this very handsome 16:9 enhanced and 5.1 Dolby Surround presentation will be the first time many will have had the chance to see it.

In most respects, The Silver Chalice is only slightly below average for this sort of thing; its story borrows heavily from both Quo Vadis and The Robe, it's overlong and short on action. But its bizarre, super-stylized production design, garish costumes, absurd dialogue, and miscast actors nudge the film into camp classic status. It isn't goofy enough to appeal to mainstream moviegoers but for classical Hollywood film fans, The Silver Chalice is, occasionally, a laugh riot. 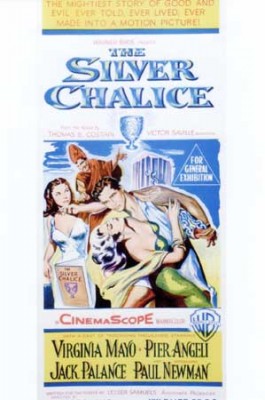 Talented young Greek artist Basil (Peter Reynolds) is adopted away from his poor father (Ian Wolfe) and into a rich family with a loving Roman father, Ignatius (E.G. Marshall). Though still a boy, Basil falls in love with a slave girl, Helena (Natalie Wood), whom he helps escape. Later, when Ignatius dies, his greedy brother Linus (Herbert Rudley) destroys evidence of Basil's adoption, and has him sold into bondage. Now a young man (and played by Paul Newman), Basil escapes his new masters with the help of Saint Luke (Alexander Scourby), who wants Basil to fashion a chalice for a Christian icon, the cup Jesus drank from at the Last Supper.

Meanwhile, the adult Helena (now played by Virginia Mayo....Virginia Mayo!?) has fallen in with the ambitious Simon the Magician (Jack Palance), whose act includes pulling a rabbit out of a pointy hat and making things disappear via a sleight-of-hand trick known as the jump cut. Simon is drafted by Mijamin (Joseph Wiseman) into the latter's anti-Roman/anti-Christian Sicariian terrorists, with Simon their self-appointed Messiah.

The most striking and bizarre element of The Silver Chalice is Boris Leven's chimerical art direction, which is like a UPA cartoon come to life. Rooms are vast but not functional; in Saint Peter's (Lorne Greene!) house there is a large room with what looks like a camping area in the middle of it, complete with picnic tables. At one point, Basil and a gladiator dual amongst dome-shaped objects that resemble colossal schematic breasts. In what's supposed to be the middle of the desert, tubes like massive organ pipes stick out of the sand for no good reason. Other sets incorporate a cheap trick Irwin Allen often used on his crummy TV shows: sets that simply fade into a black void of nothingness. Everything looks like flimsy stage flats and though undeniably distinctive, instead of looking innovative the sets merely look cheap. Real cheap. Queen of Outer Space cheap.

All things considered, Newman's performance actually isn't bad, though in this genre generally and this film especially a larger-than-life approach might have been better. Newman underplays to the point where he seems to think the CinemaScope lenses will offer the same intimacy of live television; most of the time he's too subtle for his own good. And any actor would be hard-pressed to sell lines like, "Deborra, that cup. It excited your adoration. Why?"

Indeed, thy cup runneth over with flowery dialogue, especially with regard to the menu of ancient Romans. In Nero's palace, no good meal is without "succulent dormice, saturated with poppy juice." Not to be outdone, Roman soldier Kester (Albert Dekker) offers Basil "a juicy capon, stuffed with lotus seeds and the tongues of hummingbirds."

Actors like Dekker, Joseph Wiseman and especially Jack Palance come off better than Newman because they're not afraid to play it big. Palance is quite entertaining in the film's most ridiculous role, who at the end of the film has such delusions of grandeur that he's convinced himself that he can fly. He talks Nero into letting him build a Babel-like tower (an awful series of matte paintings and models) to jump off of; Palance dresses for the performance in what looks like bright-red long johns covered with leeches.

Virginia Mayo comes off worst in an unflattering part. In contrast to Natalie Wood's dark-eyed wholesomeness, Mayo is grotesque instead of glamorous. (Needless to say, it's not a convincing transition.) She's made up with extreme jutting eyebrows that shoot up at 45-degree angles that accentuate a great overuse of blue eye-shadow. She looks like a svelte Divine (of Pink Flamingoes fame).

The film's religious story plays second-fiddle to a love triangle between the corrupted Helena, Basil, and Deborra (Pier Angeli), a devoted Christian. Angeli, at this time, was incredibly, naturally beautiful, and that Basil would even hesitate in choosing her over the banshee-like Helena is awfully hard to swallow.

The Silver Chalice is a 16:9 enhanced presentation in its original 2.55:1 screen shape. Like all early CinemaScope titles, the image is a little soft, the color a bit tepid, but it's also likely as good as it's ever looked, and a pleasure to see in widescreen.

Even better, Warner's located archived 4-track magnetic stereo prints and have preserved the original directional dialogue and, especially welcome, Franz Waxman's exceptionally good score, one I'm sure he wished accompanied a worthier movie. English and French subtitles are included. There are no Extra Features

Fans of campy Hollywood movies and '50s biblical epics will enjoy The Silver Chalice, though perhaps not in the way its filmmakers intended. It may not be the worst such film, but by all odds it surely is one of the strangest. Recommended.