In 1959 French film critic Francois Truffaut released his first feature film, The 400 Blows (Les Quatre Cents Coups) an autobiographical movie about his childhood that would propel him to international prominence and make the French New Wave a recognized and respected film movement.  It is one of the important movies in world cinema and only the fifth film released by Criterion on DVD.  Now Criterion has released the film on Blu-ray with a gorgeous picture and all of the bonus features that the SD DVD contained, making it a must-own disc.

Antoine Doinel is a young boy who doesn't seem to fit into the world.  He's not a child, but certainly not a man either.  When he looks at the adult world he's perplexed and doesn't like what he sees but like the youth that he is, he has no power to change what is wrong.  So he acts out and rebels.

Antoine lives with his mother and her husband, his step-father.  The couple doesn't get along that well; living in near-poverty is stressful.  On top of that, Antoine's mother doesn't really like him because he's a constant reminder of her failings.  His life at school is no better, as the teacher often singles the young man out for humiliating punishments.  It comes as no surprise that Antoine skips school often to go to the local amusement park or to sneak into the movies.  On one such afternoon Antoine sees his mother kissing another man. 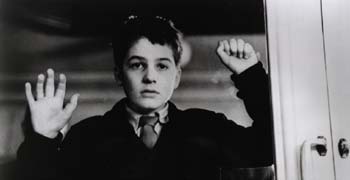 He doesn't tell his step-father, but Antoine lets his mother realize that he knows her secret.  Things get better for a while, but only for a short time, and eventually Antoine's petty crimes escalate to the point where he steals a typewriter.  Caught by the police and with his parents willing to write him off  ("If he came home, he would only run away again") The young man is sent to reform school, a place where turning out respectable members of society is the last thing that they'll ever do.

With this first feature film Truffaut fully embraced the idea of 'camera-stylo' ( the camera as pen.)  Eschewing the traditional (at the time) method of film making, he uses the camera the way an author uses a pen to put his style and feeling into the work.  That doesn't mean that this is some avant-garde opaque film that is hard to understand, just the opposite.  It's an easy film to relate to.  Truffaut creates scenes and setting that are nearly universal in their meaning and emotional content.  When Antoine and his parents are tripping over each other in their miniscule walk up apartment the poverty they are experiences and the stresses related to that are quite apparent.  That's what makes this such an effective and powerful film:  nearly everyone can identify with many of the scenes.

This coming of age film also does a wonderful job of capturing that in-between feeling of adolescence.  Antoine feels that no one understands him, and they really don't.  It's easier for the teacher to mark him as a trouble maker than to discover what's really causing the behavior.  His parents act the same way too, willing to listen to other's critiques of their son without hearing his side of things.  The film shows Antoine trying to be good, such as when he tries to do his homework.  He gets interrupted and can't finish it but doesn't want to be labeled a dunce once again.  His solution?  To skip going to school so he won't have to turn it in.  Of course when it's discovered, he's labeled a liar which just reinforces the bad opinion others had of him.

Truffaut does a wonderful job behind the camera.  The elevated shot of the gym class running through the streets of Paris is beautiful and hilarious at the same time, but more importantly he creates shots that visually reinforce what the characters are thinking and feeling.  Antoine's room, a converted closet, illustrates his feeling of being trapped better than any narration or long expository speech could.  Another example of this technique is when Antoine is being held in jail.  Sitting behind a chain link fence he pulls his turtleneck sweater above his mouth.  He can't speak, and even if he could no one would listen to what he had to say. 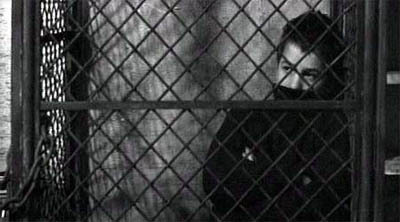 As wonderful as the directing is, a lot of the film's success is due to the lead actor playing Antoine,  14 year old Jean-Pierre Léaud.  In one of the extras it's revealed that Jean-Pierre skipped school and hopped a train to travel across France to get to the audition.  He really looks like he lived the role before he ever stepped in front of the camera.  He has a weariness and age about him that makes him seem years older than he really is in some scenes.  Truffaut also allowed Léaud to improvise many of his lines (the part where he's talking with a psychiatrist in the reform school for example) and that gives the film a natural and spontaneous feel which in turn makes it seem all the more real and personal.

A truly bravura film with an ending that will stay with viewers for years, this is a true classic that deserves to be on Blu-ray.

This film comes with the original French mono soundtrack, uncompressed, with optional English subtitles.  There is no English dub, and there really isn't a need for one.  This film should be seen in the original language and a dub track would ruin the beauty of the words, even if you don't understand what's being said.  In any case the disc sounds wonderful.  The dialog is clear and easy to discern and the incidental sounds and background music are equally clean.  Being filmed in 1959, the range is a bit limited but the film has no background hiss and no pops or other common aural defects are present. The audio track has been cleaned up wonderfully.

The film comes with an aspect ratio of 2.35:1, as it was originally shown, and encoded at 1080p with the MPEG-4 AVC codex.  The picture is amazing.  I was very happy with the version that Criterion put out in the Antoine Doinel boxed set, but this transfer even improves on that.  The black and white image on this disc is very detailed with even the slightest lines being tight and pronounced.  The blacks are solid and inky and the whites are strong without being overblown.  There is some grain, but it's even and natural looking.  On the digital side things look just as good. Posterization wasn't a problem, and neither was aliasing or blocking.  I could detect no edge enhancement either.  Overall this is a wonderful looking disc.

The extras from Criterion's earlier version are all ported over which makes this a great disc to own.  There is a commentary tracks by Professor Brian Stonehill, a film scholar that is very informative and knowledgeable.  He talks about this movie's place in film history and the French New Wave, the cinematic style Truffaut used and about the film's autobiographical nature.  This last point is expanded upon in the second commentary track, this time by Truffaut's lifelong friend Robert Lachenay.  This track is in French with optional English subtitles and is one of my favorite commentary tracks ever.  Lachenay was the basis for the character René in the movie, and his recollections of the trouble he and Francois used to get into as teens isn't only interesting, but it illustrates just how personal this film is.

If they had left it at the two commentary tracks, this would have been a great disc, but Criterion adds even more.  There are the audition tapes that were shot of Jean-Pierre Léaud, Patrick Auffay (René), and Richard Kanayan (one of the children in the film.)  There's also a wonderful reel of film taken of Jean-Pierre Léaud at the 1959 Cannes Film Festival where the film would win Truffaut a best director award, and other two TV interviews with the director (from 1960 and a longer one from 1965.)  Altogether this is an impressive set of bonus features.

When reviewing Blu-ray discs I also ask myself if people should upgrade if they have the SD DVD.  While this release offers no new bonus features and the earlier DVD release does look good up-converted, I still think it's worth the double dip.  This is not only a historical film, but a very powerful one as well.  There are scenes in this production that will stay with you for life, and it holds up very well to repeated viewings.  A fantastic film with a wonderful child actor (who would go on to become an internationally recognized star) this disc belongs in every film library and the DVD Talk Collector Series.