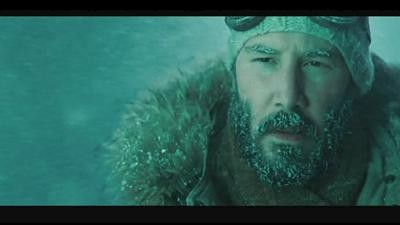 I know, I know. I need to see Robert Wise's original 1951 version of The Day the Earth Stood Still, but for whatever reason, I haven't done it. I even owned it for a period of time, but I just never got around to watching it. It happens. On the other hand, if I had seen it, it would conflict with my rule of thumb that seeing the remake first is better, because then you get to experience both on (mostly) their own terms. Thus, without personal attachment to the original looming, I can say that this big-budget remake is a briefly thoughtful, mostly quiet and artificially action-packed experience that feels like a car wreck between two movies: a fairly entertaining character piece and the sci-fi action extravaganza that 20th Century Fox obviously expected to get.

The movie's first act shows the most potential. Dr. Helen Benson (Jennifer Connelly) is swept away from her with a police escort, by flustered agents who inform her that even they don't know why she's being picked up. She's rushed into a room crowded with other scientists and engineers and told that not only is something from outer space going to impact Earth in the middle of Manhattan, but it's going to happen in less than 80 minutes. I always question the way government officials act in movies, but there's a palpable sense of tension and paranoia, and even a few good character touches (Jon Hamm fans should also know that his brief performance is front-loaded). A better movie would have played out closer to real time; the concept that Earth might be destroyed with such little forewarning is a really great idea (although there's a shade too much 9/11 imagery here). Sadly, it barely makes up the first twenty minutes. At the end of it, a giant swirling orb touches down in the middle of Central Park, and an alien creature steps out, only to be shot by an overzealous soldier. Not the best first impression.

The creature is taken to a hospital, where its' strange, placenta-like shell melts away to reveal what appears to be a human being. Instead it turns out to be Keanu Reeves, playing an alien creature named Klaatu who somberly informs the President's first-hand aide (Kathy Bates) that he'd like to address the United Nations. Bates' character is problematic. 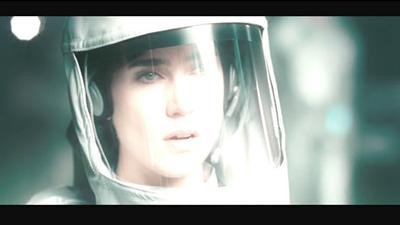 She plays it as reasonably as she can, but as written, she's yet another trigger-happy, kill-all-the-aliens caricature straight out of endless alien invasion movies that prevents logical characters from doing logical things. She refuses his request, and they tell Helen to drug him so they can interrogate him. She fakes it instead, injecting him with saline instead of sedative, and Klaatu makes his escape.

During the escape sequence, Scott Derrickson's direction goes into hyperdrive, using flashy editing and CGI to amp up the excitement, but it feels forced and unnatural. It happens several times, all in isolated bursts (Robert Knepper's thankless and stereotypical military commander is the worst offender, popping up occasionally to yell in a Texas accent). Only part of the spectacle, like the swarms of tiny bugs that eat up everything in their path (as seen in the misleading trailer), feel integrated with the story. The effects themselves are hit-and-miss. The giant orbs, shown on the movie poster, are stunning to look at, and those swarms of bugs are eye-poppingly cool, but most of the effects that integrate real actors look weak, and anything involving GORT (Genetically Organized Robotic Technology) is terribly fake. I was surprised to find that Weta worked on the project and not ILM: shiny setpieces vs. inadequate everything else is one of their signature moves. As a side note, the bugs are also kind of intense. I wouldn't say the movie pushes the PG-13 rating, but it nudges it a few times.

I've always thought of Keanu Reeves as a more physical actor than an emotional one (see his solid, limber performance in Constantine for a good example), and it's almost endearing the way he doesn't seem to "get" the joke in regards to his flat acting style, which the producers of Day 2008 have ably exploited in having him play an emotionless alien. I liked him in the movie, but those who already dislike him as an actor aren't going to have their minds changed. Jennifer Connelly does a fairly good job during the first half of the film, but as the bits of characterization from the first act peter out, it's like she's acting into a vaccuum; she puts plenty of emotion out but none of it registers. 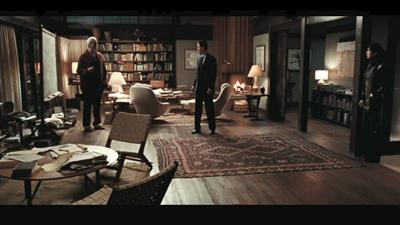 Will Smith's son Jaden plays her step-son, and his primary mode is "whiny". He's upset about the death of his father, which apparently gives him license to be annoying and argumentative with Helen at every opportunity, but in later scenes where he's left alone with Klaatu, he softens up a little and the character becomes tolerable. The best scene for both Connelly and Smith is a late-breaking one in a cemetery where they finally manage to hit a few emotional marks.

Klaatu's goal in Day 2009 is to save the Earth, which is bad news for its inhabitants. "If the Earth dies, you die. If you die, the Earth survives," he tells Helen. Yet the film doesn't want to be a "message" movie, so no obvious examples are shown lest the audience get upset. I liked WALL-E as much as the next guy, but I was never certain about the movie's stance on consumerism. On the other hand, I felt like the movie was prodding me for a reaction, whereas Day's criticism barely registers as a plot device. The film's story is its' least interesting element, and the various ideas littered throughout are far more interesting.

As someone who can't compare and contrast the original to this hyped up modernization, I felt The Day the Earth Stood Still was better than expected (I avoided it in theaters), but the commercial aspect of its existence overpowers its low-key successes. Derrickson's version misses ample opportunities to explore the nature of meeting a creature from another planet, and the times it does breach the topic it doesn't have anything to say. The 1951 original is meant to be a social landmark, and even won a Golden Globe for promoting International Understanding. The new version is entertaining, but the fact that it can't emotionally connect to its audience, much less connect other people, is going to leave many fans rightfully disappointed.

The DVD
Fox sent me a screener disc in a white sleeve with a plain label, so I can't personally comment on the packaging, but the front cover will feature the War of the Worlds poster dressed in an aquatic blue-green tint, with Gort's head in front of it. 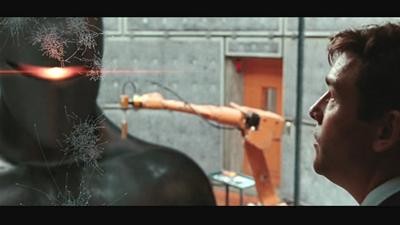 The Video and Audio
I also can't comment on the picture, which crawls with compression artifacts and features the 20th Century Fox watermark from time to time. The English Dolby 5.1 track is a much better experience, especially during the many unwelcome action setpieces. The subwoofer gets a good workout during the initial appearance of the giant orbs, and the swarms of bugs near the end of the movie surround the viewer with the chittering and flapping of wings (sounds like a rain stick to me). None of it overpowers the dialogue, either. French and Spanish 2.0 Surround and English SDH, French and Spanish subtitles are also included. I don't want to grade either of these, because who knows how much they're compromised, but pending final product (hint, hint), I'll be happy to post some ratings.

The Extras
The disc that 20th Century Fox sent me is from not a one, not a two, but a three-disc set. I only got Disc 1, but Disc 2, in a nice touch, is the original Day the Earth Stood Still, and Disc 3 contains a Digital Copy. (The two-disc set being released consecutively also includes the original Day but drops all the remake's special features). I don't know if Disc 2 will be the original "Studio Classics" double-sided release, Disc 1 of the recent two-disc special edition, or a special disc made just for the set, but if Fox is nice enough to send over a final copy (hint, hint), I'll be happy to update this review.

Three deleted scenes kick things off. They run an aggregate 1:53 and feature riveting lost material like "Extended Version of Klaatu Being Wheeled Down Hallway". Oh, the excitement.

Four featurettes contain quite a bit of material. "Re-Imagining the Day" (30:05) is a general overview of the production. Can I describe it and avoid making it sound unintentionally hilarious? 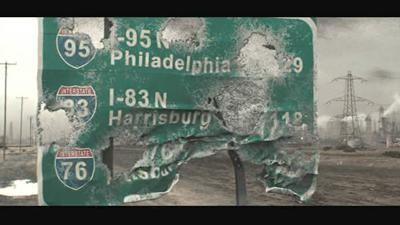 Several film historians (including Blade Runner encyclopedia Paul M. Sammon) gather to list ways the original Day the Earth Stood Still is a timeless classic, technicians talk about how the visual effects should be "invisible", and director Scott Derrickson compliments Keanu Reeves on not "overacting". Answer: No, I can't. Nonetheless, as the core documentary, it should satisfy the casual viewer's interest. "Unleashing Gort" (13:52) is a surprisingly interesting talk about the look of Klaatu's giant protector where VFX supervisor Jeffrey A. Okun lays out his sensible argument for Gort's ultimate appearance. "Watching the Skies: In Search of Extraterrestrial Life" (23:08) seems like it was produced for television, featuring a group of scholars and scientists chatting about alien life. It's well-made and interesting (the part about the "Wow!" signal is really intriguing), but there are lots of film clips. Lastly, we have "The Day the Earth Was Green" (14:04), which tackles the movie's eco-friendly production. It's not too preachy and the process is great news, but fifteen minutes is a little much and it all smells a bit like self-promoting propaganda on Fox's part.

Writer David Scarpa provides an audio commentary for the film. I don't know where Scott Derrickson was, but Scarpa is an intelligent commentator. His technique is to talk in bursts, watching silently until he sees something that provides a topic, and talk at length until he's said everything there is to say about it. It leads to lots of gaps, but when whenever Scarpa opens his mouth, it's interesting and engaging. He goes over his feeling about Helen's investment in science over faith, how his doctor father's experience on September 11th informed the movie's first act, the thinking behind the orbs, and changes from his early drafts to the final film. He also answers a lot of questions I had some of the film's artistic decisions, and even those who didn't like the movie might want to check this out; there's more to learn than you might expect from seeing the movie. There's some mild information overlap between Scarpa's interviews during the featurettes, but this is one of the better solo tracks I've had a chance to listen to. 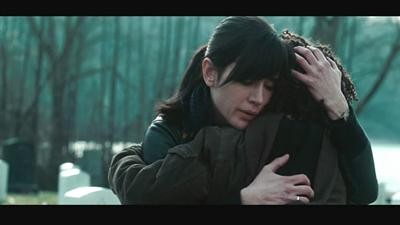 Several photo galleries wrap things up (including a four-picture gallery of art contest winners from the film's website), and finally, the theatrical trailer. Sadly, this is the first major DVD I've encountered in awhile where the bonus features are not subtitled. Another unwitting strike against multi-culturalism!

Conclusion
The Day the Earth Stood Still 2009 won't make a dent in the original's legacy, but despite what film purists might think, it's still a mildly engaging psuedo-action flick. That said, it's absolutely the inclusion of Wise's film (not that I received that disc; hint, hint) that pushes this DVD package up from a "rent it" to a recommended rating, where you can pretend that the remake is the bonus feature and not the classic.