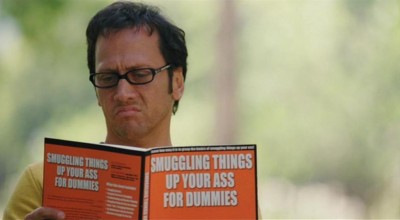 I don't share a fervent distaste for Rob Schneider like most critics and audiences do. Under the tutelage of pal Adam Sandler, Schneider has landed a few comedic highlights that made the most out of his askew sense of humor. However, endeavors without the Sandman have not been welcome, and "Big Stan" is an unfortunate addition to Schneider's growing list of cringe-worthy achievements. A prison comedy that boldly confronts the "hilarity" of male rape, "Big Stan" isn't as offensive as it imagines itself to be, and nowhere near as silly as I'm sure Schneider hoped for. It's a just a forgettable, unfunny waste of time, for both the actors and the viewer.

Stan (Rob Schneider) is a real estate scam artist finally arrested for his crimes. Sentenced to 3-5 years in prison, Stan is permitted six months to prepare for his incarceration, triggering a massive fear of anal rape that he refuses to disregard. Returning home to his wife Mindy (Jennifer Morrison, the only amusing element of the film), Stan sets out to learn various martial art practices to make himself "unrapeable," settling on The Master (David Carradine), a homeless guru who moves in with Stan and teaches him ways of endurance and self-defense. Having bulked up for his prison stay, Stan enters the big house, quickly taking over the cell block with his newfound toughness, soon building a peaceful community out of the criminal flotsam and jetsam that Warden Gasque (Scott Wilson) doesn't approve of.

"Big Stan" is not only the latest starring role for the cameo-happy Schneider, but also represents his directorial debut, bringing his years of comedy education to the screen now armed with full artistic control. So, of course, Schneider picks a rape comedy to christen this career change, and the outcome is expectedly withered and wrongheaded.

Granted, the prison comedy genre hasn't been well served in recent years, with "Let's Go to Prison" and "Madea Goes to Jail" both showcasing a definite lack of imagination when it comes time to assemble some generous slapstick behind bars. "Big Stan" is profoundly silly, which can be a wonderful thing, yet the screenplay chases the wrong targets to exploit, namely the violation theme. The idea of Stan's unrelenting corn-holing panic is a distinct concept to bat around, but not for 105 punishing minutes. "Big Stan" spends every moment ringing the anal invasion bell, repeating the same joke over and over until the film asphyxiates. Schneider plays the dread convincingly, but his failure to find even the slightest punchline deviation is depressing to view.

What's (barely) beyond the rape material is a series of action sequences meant to show off Schneider's gym-rat body and his rudimentary fist-first abilities (the choreography is slow and unconvincing), smoking and fart jokes with Carradine (sayonara "Kill Bill" career resurgence!), nipple endurance tests, hoary Scientology jokes, and partial nudity from a 67-year-old Sally Kirkland. Appetizing, right? Matters are further muddled by a stunningly involved screenplay that endeavors to work in alleged infidelities and a prison yard massacre master plan while still making fun of inmate homosexuality and gang life. And no, there's no Adam Sandler cameo. However, for your time invested, you do receive the opportunity to hear Dan "Grizzly Adams" Haggerty chat up the finer points of sexual violence. 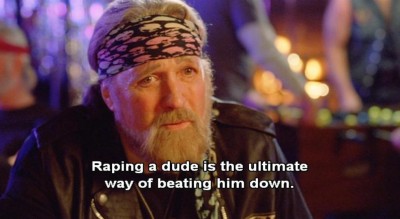 A feature-length audio commentary with filmmaker Rob Schneider, and actors Buddy Lewis and Salvator Xuereb is casual and jokey, spending more time pointing out the obvious than divulging production secrets. Nothing here is genuinely funny and I can't imagine anyone would truly be on the hunt to learn more about "Big Stan," but if the mood requires it, the track is suitable in a white noise kind of way, with plenty of silences and ogling of Morrison to break up the courtesy laughter and inadequate offering of information.

"Comedy is Pain: The Making of 'Big Stan'" (30:24) opens with Schneider's 2006 hospitalization for heat exhaustion/food poisoning. From there, the featurette explores the arduous shoot for "Big Stan," itemizing all the accidents and ensuing pain that Schneider endured. A wonderfully produced BTS journey, the documentary does a vivid job communicating the production's misguided sense of adventure and danger. Interviews with cast and crew are a little more delusional (Kirkland and Morrison describing their character history is a hoot), but remain massaged marvelously into the final product.

"Odds & Ends: Hilarious Outtakes from the Cast & Crew" (4:15) is a featurette that doesn't actually contain any outtakes. A short snapshot of on-set joking around, the moments are jovial, but never "hilarious" as promised. 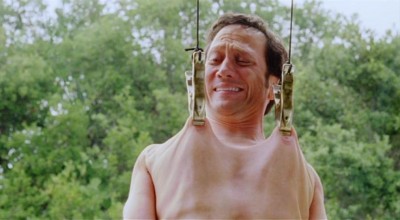 I didn't laugh once during "Big Stan," but I suppose that was to be expected. The film tries its damndest to slap the fire-engine-red taboo button for a comedic identity, but never quite accepts the obvious challenge to merge hollow crudeness with flashes of cool water wit. If this is the best Schneider can come up with while sitting in the captain's chair, perhaps it's best he stick to bite-sized roles under the comfortable wings of his closest industry friends.