The Criterion Collection // Unrated // March 17, 2009
List Price: $29.95 [Buy now and save at Amazon]
Review by Chris Neilson | posted March 16, 2009 | E-mail the Author
Dodes'ka-den (1970) marks the twentieth feature film of legendary Japanese director Akira Kurosawa to be released on DVD by Criterion, and while there's seemingly no end to the Kurosawa films that Criterion could release, alas the better ones are already out. Unfortunately, for cineastes hoping to rediscover another masterpiece, Dodes'ka-den is better remembered for reasons other than its intrinsic merits.

Between 1943 and 1965, Kurosawa had averaged a film a year, but Dodes'ka-den was the only film completed in the decade between Red Beard (Akahige) in 1965 and Dersu Uzala in 1975. Two failed efforts for Kurosawa followed Red Beard including being summarily dismissed by Twentieth Century Fox from directing the Japanese-language portion of the Pearl Harbor epic Tora! Tora! Tora! (1970), amid concerns about the production being behind schedule and over budget, and about his sanity. 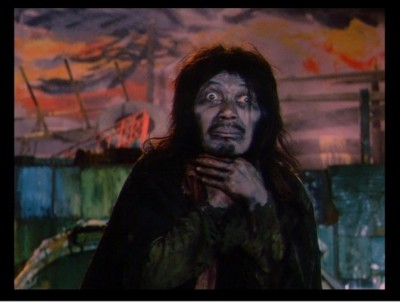 To restore confidence in his filmmaking, Kurosawa aimed to make Dodes'ka-den quickly and cheaply while earning critical acclaim and commercial success. Dodes'ka-den succeeded on the first two counts, but came up short in terms of acclaim and success. Whereas Kurosawa had labored on Red Beard for nearly two years, he wrapped shooting on the independently-financed Dodes'ka-den in just 28 days. Kurosawa's first color film, Dodes'ka-den is framed for 1.33:1 exhibition. Forgoing more elaborate camera movements for reasons of time and expense, Kurosawa for the first time relies on zoom to simulate that camera movement. Using inexpensive but expressionistic sets and many actors with whom he'd never previously worked, Dodes'ka-den looks very little like the Kurosawa films that preceded it, marking the furthest expressionist outlier in his oeuvre.

Dodes'ka-den was a critical and commercial failure in Japan, further impeding Kurosawa from returning to filmmaking again until the foreign-financed Dersu Uzala in 1975. So disheartened was Kurosawa during this trough in his career that he attempted suicide in 1971. 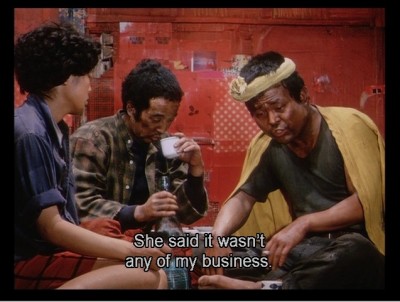 Dodes'ka-den is an ensemble piece without principal protagonists or plotlines. It anecdotally considers the lives of a community of marginalized people living atop a Tokyo trash heap. The characters include a mildly-retarded teen who plays at being a trolley conductor, a pair of wife-swapping drunkards, a promiscuous woman and her kind-hearted husband, a beggar boy and his broken-down father, a withdrawn girl and her lecherous stepfather, a suicidal widower, a shrew and her fiercely-protective, lame husband, and a saintly old tinkerer that keeps the community running.

Kurosawa forgoes realism by favoring exaggerated colors, stylized sets, and extreme characterizations here. There's absolutely no subtlety or depth to anything or anyone. The characters and circumstances are exactly as they appear on first impression, and at 140 minutes this is nearly unbearable despite many fine small moments. What saves Dodes'ka-den is simply how oddly beautiful so much of the film is. Here Kurosawa's passion for painting shines more luridly than it does anywhere else in his oeuvre. 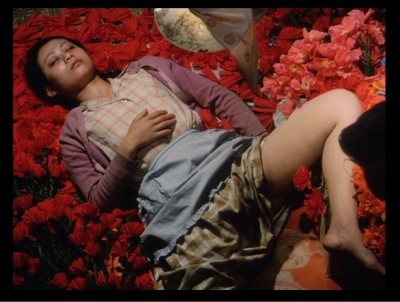 Presentation
Video:
Dodes'ka-den is presented in its original aspect ratio of 1.33:1. The image is pictureboxed. The progressive image looks sharp with deep, rich colors and flawless contrast. A handful of frames appear to be missing from one scene and are partially covered by repeating the surrounding frames, but it is not clear whether this awkward cut is attributable to Kurosawa, Criterion or a third party.

Audio:
Dodes'ka-den is presented in Dolby Digital mono which is mostly clear and faithful though shallow. Optional English subtitles are provided for the Japanese dialogue.

Extras:
Extras consist of a 24-page booklet with an essay by Kurosawa scholar Stephen Prince and an interview with Kurosawa principal assistant Teruyo Nogami, a theatrical trailer, and a 36-minute excerpt from the Japanese documentary series Akira Kurosawa: It Is Wonderful to Create (2002).

Final Thoughts:
Intrinsically, there's little to merit attention in Akira Kurosawa's expressionistic Dodes'ka-den. The characters and drama are overly-simplified and flat, favoring writ-large symbolism over subtle realism. Yet, the uniquely painterly style, and the handful of fine, small moments justify a viewing by Kurosawa fans.