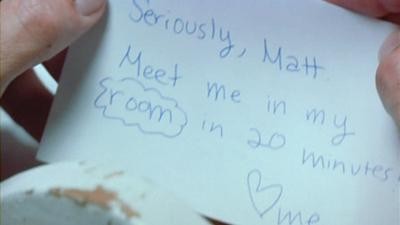 There are already two fairly negative reviews for the Duplass brothers' Baghead on DVDTalk, so before I offer a differing opinion, a warning is in order: I enjoy films where little happens. Now, this isn't to say that those other reviewers don't (I guess I'd say their reviews generally focus on the film's artistic sensibilities), or to sound like a pretentious critic (I also liked Bad Boys II). I just want to be clear that Baghead is an extremely low-key film, and some people might not have the patience for it. If you do, you're in luck: this is a great little character piece with two knockout performances, big laughs, and some lightly entertaining creepiness to boot.

Just looking at the two side by side, I might have described Baghead as a parody of Brian Bertino's thriller The Strangers. Both involve sack-headed killers stalking around secluded homes in wooded areas, but I know Baghead was made first. Nonetheless, the similarities should still be easy to visualize, if one swaps out Liv Tyler and Scott Speedman for Chad (Steve Zissis), Michelle (Greta Gerwig), Matt (Ross Partridge) and Catherine (Elise Muller). The four friends are holing up in the middle of nowhere with the intention of writing a screenplay to star the four of them after seeing a ludicrously overwrought short film by an old college acquaintance (Jett Garner), but instead of Final Draft-worthy genius, they find themselves being terrorized by the title character.

The angsty subplot about Chad and his desperate attempts to get Michelle's romantic attention hits some well-treaded bases, but the performances by Zissis and Gerwig are such painful perfection that any familiarity is barely noticeable. Both of their reactions in a scene where Michelle gently but firmly shuts Chad down are heartbreaking and funny in a multitude of ways, and the way their story develops as the movie continues is very satisfying. 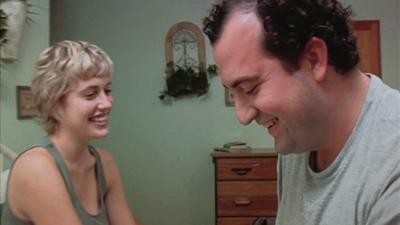 It helps that both characters are exceptionally likable: despite various rejections, Chad never becomes too mopey, and Greta Gerwig's spaced-out, bubbly attitude is incredibly endearing. Their on-screen chemistry is the number one reason I'd recommend the movie, and hopefully both of them will go on to do great things (I'd peg Zissis as a perfect fit for a John Belushi biopic if he's able to muster up the energy, and Gerwig looks, literally and professionally, like she could be the next Chloe Sevigny).

The flipside of Chad and Michelle's tug-of-war is Matt and Catherine's relationship, which is somewhat less appealing. Matt seems a bit lost when the group fails to embrace his style of brainstorming, but Ross imbues the character with confidence even though Matt is strangely out of touch with what the other three are thinking. He and Chad are good friends, but their bond threatened by Michelle's interest in him, which he fends off in the interest of protecting Chad's feelings (a tiptoeing act that Partridge pulls off very well). Finally, in comparison to these other three performances, Catherine almost fades into the background. She's the least likable of the bunch: nitpicky, clingy, irritable and jealous, which may not be Muller's fault, but is forced upon her anyway.

But what about Baghead, who starts popping up in unexpected places? Michelle believes she sees him watching her throw up in the early hours of the morning after the first night of drinking, but she can't be sure it wasn't just a dream. It seems like one of the group is playing a prank on the others, but everyone seems to have an alibi. In any case, I get the sneaking suspicion that the truth is unsatisfying to people, but personally, I don't think the big reveal is all that relevant to the movie's charms. I suppose I can see how it might look as if Mark and Jay Duplass are trying and failing to deliver a gouging criticism with Baghead's identity, but I thought it was more of a friendly jab. Another relevant factor when assessing Baghead is that the cinematography comes from the Blair Witch School of Handheld (those who get motion sickness should be forewarned). I don't think it's a big deal. Yes, the camera shakes quite a bit, but here it's just a look, and not motivated by the story. Baghead doesn't seem to be all that interested in being scary, so anyone hoping for a nail-biter will probably end up unimpressed, but Baghead himself is a creepy image, and there's some tension generated by his appearances. 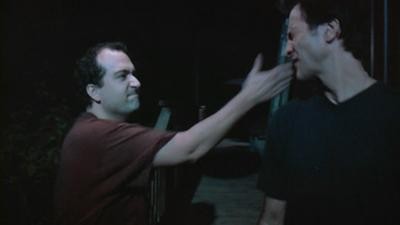 Baghead is a film for a niche; a low-key piece that will greatly entertain the narrow slice of the moviegoing public that shares the same sensibilities. It doesn't have any grand themes or statements, and the insight on the characters is limited, but any subjects the film does shine a spotlight on, it knows like the back of its hand. Sony's packaging dooesn't help much, almost wishfully implying that it's a genre piece, but Baghead is actually a quiet character study, and those adventurous enough to give it a spin should be careful not to let the film's personal comedy and barely-there horror pull the wool -- or bag -- over their eyes.

The DVD
Baghead uses its intriguing poster as the front cover artwork, and is well-designed front to back (the only thing I don't like is the new "Sony Pictures Classics" banner). The disc has an image of the baghead's face, but the menu has an even cleverer, hand-drawn style that I really like.

The Video
I've seen a lot of films recently with digital sources, and Baghead's 1.78:1 anamorphic widescreen presentation is the best of them. There's no motion blur during the action and it all looks especially crisp. Blacks aren't deep or inky, but other than that there's nothing left to be desired with the video on this DVD.

The Audio
2.0 audio is the order of the day, and it's pretty basic. Almost the entirety of the movie is dialogue-based, so you're not going to get much beyond that except the occasional background white noise and finally a little action during the last act of the film. It's simple, but that's the kind of film it is. For whatever reason, the disc only has French subtitles, so if you want English you'll have to use closed captioning. I was disappointed at first, but dialogue is clear enough it wasn't a problem.

The Extras
First, there's an audio commentary by directors Mark and Jay Duplass, which invokes terms like "great-itude" to describe scenes in the film. It's a funny and laid-back chat that actually focuses directly on what's happening on the screen, which sometimes seems like a lost art. They joke about the trials and tribulations of shooting on a miniature budget, how they aren't pot smokers (editor Jay Deuby is a real person), their writing and directing styles (fingernail-chewing nervousness), 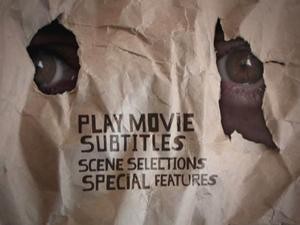 and their four lead actors (including their self-proclaimed muse Steve Zissis and his single-solid-color "Scooby-Doo shirts"). Between the two of them there's almost no silence, and this track alone makes the disc a solid package.

"The Duplass Brothers Answer Questions They've Already Answered" (15:50) is a highly entertaining interview with same two guys where they recall the most popular questions they've been asked by press and audiences at Q+As. Not only will you learn about the making of Baghead, but you'll think twice next time you find yourself in front of a director poised to ask a stupid question. "Baghead Scares" (1:51) is probably more amusing if I don't spoil it, although it's not clear who made it and whether it's real or not.

Unadvertised on the back cover is the theatrical trailer, along with a veritable library of Sony previews: looks at Synecdoche, New York, The Wackness, Frozen River, Waltz With Bashir, The Lodger, Standard Operating Procedure and a Blu-Ray spot are included, some of which play before the DVD menu. The bonus features are subtitled in English only, including the audio commentary.

Conclusion
I thought Baghead was pretty good, and the disc is solid too, but since the film will only appeal to a certain type of viewer, I'm going to give a restrained recommended rating to this one to those who share my taste when it comes to low-key comedy.