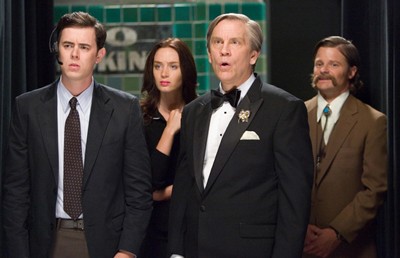 The Great Buck Howard is a has-been hypnotist/mentalist whose career, as he is more than ready to tell you, was at its heights in the days when Johnny Carson hosted "The Tonight Show." When Johnny left, so did Buck's awareness of time, stopping him dead in his tracks, never developing, completely unaware of the modern world. Like an old vaudeville act that refused to acknowledge a little thing called "the motion picture industry," Buck has continued to tour the United States, peddling the same old tricks to any backwater burg that will have him. And that's because Buck Howard is an entertainer at heart, the real deal.

The titular magic man is the subject of The Great Buck Howard, a raging egomaniac but talented illusionist played by John Malkovich, and it's the new film from director Sean McGinley (Two Days) and Tom Hanks' Playtone production company. That latter part is important because you can feel the influence of Mr. Hanks on this picture. Not only does it star his son, Colin, as the young man who becomes Buck's road manager (and Tom as Colin's dad in the movie, too), but it even features a small part with Steve Zahn, playing essentially the same kind of dimwitted nice guy that Hanks cast him as in That Thing You Do! Arguably, The Great Buck Howard is like That Thing You Do! for magicians, channeling the Amazing Kreskin and the sense of wonder he fostered the way That Thing tried to recreate every hope and dream of every 1960s teenager with a guitar.

Colin Hanks' character, Troy, is our "in" to Buck's world. A law school dropout with no real aspirations of his own, he begins to travel with Buck in search of whatever magic is still out there for either of them. He weathers Buck's many tantrums and begins to appreciate what the man offers on stage, perhaps as much in the disagreeable performer's thrall as any of the volunteers from the audience. Along the way, he learns a few lessons about the fleeting nature of fame, loyalty, and a little bit about romance and self-assurance from Valerie (Emily Blunt), the PR gal assigned to Buck when he is to stage a big event in Cincinnati. That event ends up going all wrong, but ironically, the wrongness becomes Buck's ticket back into the big time.

I hate to keep harping on That Thing You Do!, but it's an inescapable comparison. Both of these films are about the rise and fall of a dreamer, which in itself is not so unique. What sets them apart is that they are both set in a very nice world where people are decent and don't really swear or do anything untoward except maybe enjoy a drink now and again. As a director, Tom Hanks was able to work that genial tone into something genuine and nostalgic that managed to capture the bitter even as it worked hard to keep the sweet front and center. The problem is, Sean McGinley, who also wrote the screenplay for The Great Buck Howard, doesn't seem to get that his story isn't actually all that sweet, it's a whole lot more bitter. The movie lacks the mean streak that we all know is in there, the sense of loss and disappointment that has forced Buck off of television and into dilapidated community halls in Bakersfield. People speculate about Buck's sexual orientation, but no one ever asks why he is so alone that no one even knows which way the hypnotist's pendulum swings. Deeper issues are hinted at but never examined.

Sure, The Great Buck Howard is arguably supposed to be about Troy and his learning to be his own man and find what he wants to do, to gather the strength to stick to his guns the way his oddball, accidental mentor has. Let's be honest, though, are any of us really showing up for this film to see Colin Hanks? He's very good in the same likable way his father is, but this is John Malkovich's show. Malkovich puts on Buck's clothes and goes wild with them, relishing in the man's idiosyncrasies, digging his teeth into the tirades, and genuinely putting on a good show the same way Buck does when given the chance.

Unfortunately, that's not enough to gloss over the fact that so much more is missing. The script lacks any real arc, there are no surprises, it all falls into place the way anyone can guess it will just by watching the trailer. Given that the thing that makes Buck Howard "great" is his ability to astound audiences with the unexpected and unexplainable, he'd probably expect a movie of his life to provide the same for anyone who goes out to see it. No dice, however, there is no grand finale, just a movie that is more like the warm-up act than the main attraction.