MGM // Unrated // March 24, 2009
List Price: $34.99 [Buy now and save at Amazon]
Review by Stuart Galbraith IV | posted April 8, 2009 | E-mail the Author
It's nearly 45 years old - 45! - yet Goldfinger is as exciting and humorous today as it was back in 1964, and it remains one of the most rewatchable movies ever. In his recent review DVD Savant says Goldfinger's a movie he could watch every six months, and few would disagree. The third 007 movie, Goldfinger was so successful - earning $125 million (presumably including reissues) against a budget of just $3 million, not high even by 1964 standards - producers Albert R. "Cubby" Broccoli and Harry Saltzman gradually became very reluctant to tamper with the 007 formula Goldfinger largely established. The screenplay by Richard Maibaum and Paul Dehn follows Ian Fleming's 1959 novel quite closely* but makes a few key changes; most are improvements, a couple of them ingenious.

The film is not without its flaws - for most of the story James Bond is either held prisoner or at a disadvantage to the point where much of the narrative circles around him; he doesn't even get to save everyone at the end - an anonymous bit player does. And it is by far the most outrageously sexist of the entire series - but it may also be the most exhilarating. The siege of Ft. Knox and Bond's efforts to defuse to a ticking atomic bomb while keeping Goldfinger's powerful manservant at bay is arguably the canon's high-water mark, with one of cinema's all-time great payoffs**.

The MGM/Fox Blu-ray has no new extra features but oodles of old ones. Instead, the main draw here, as with Dr. No (1962) and From Russia with Love (1963), is being able to see the film at home in high-definition, further enhanced by its Lowry digital restoration. It's not quite up to the level of those two earlier titles but comes close; some scenes are merely noticeably improved while others almost leap off the screen. I've seen Goldfinger in 35mm probably seven or eight times over the years, as well as on VHS, laserdisc, DVD - even RCA SelectaVision Video Disc. Except once when I caught what I assume must have been an original, pristine IB Technicolor print, I've never seen Goldfinger look this good. The stereo remix, meanwhile, really brings out John Barry's superb score while adding a welcome directionality to the sound effects. 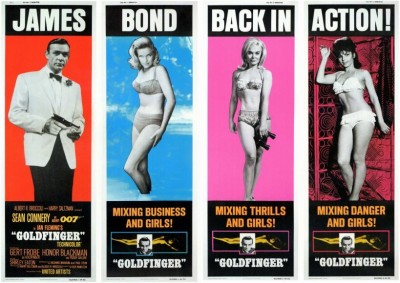 After a well-paced golf competition - straight out of the novel - between the two adversaries, Bond follows Goldfinger to Switzerland where Bond very briefly teams up with the murdered girl's sister (Tania Mallet) who too quickly is likewise murdered by Oddjob; he breaks the girl's neck with his steal-lined bowler, which he throws like a boomerang. Bond discovers Goldfinger is in league with a Red Chinese agent (the Pink Panther series' Burt Kwouk) for something called "Operation Grand Slam." When Bond is captured, Goldfinger binds him on a metal slab beneath a powerful laser, which slowly inches its way up toward Bond's crotch, unnerving the normally cool secret agent, and prompting this immortal exchange:

James Bond: Do you expect me to talk?

Auric Goldfinger: No, Mr. Bond. I expect you to die.

What makes Goldfinger so great? If it's not the best James Bond movie then it's certainly in the Top Five. For one thing, it's the film where all the core ingredients that defined the series pretty much were all in alignment, simultaneously peaking at once. Sean Connery gives a more relaxed and confident performance as James Bond, and had not yet tired of the role. Editor Peter Hunt was inventing new ways to cut scenes together, editing techniques that everyone uses today but which were heretofore unseen in 1964 (note Hunt's extensive use of jump cuts and optically-printed skip-frames to accelerate action). Ken Adam's production design, though less extravagant than that found in later Bonds like You Only Live Twice (1967), is incredibly impressive; everyone remembers Goldfinger's contraption-filled den with its scale model of Ft. Knox and the surrounding terrain, but Adam's interior sets for the depository itself are superb, too, and somewhat underrated. And John Barry's score is absolutely sensational, particularly his cues for the incredibly suspenseful laser scene and for "Operation Grand Slam" itself.

Gert Fröbe's Goldfinger is also the all-time best Bond villain. He was so memorable that at one point there was serious discussion about bringing Fröbe back for another Bond as Goldfinger's twin brother (!). Many of the Bond villains that followed clearly emulated Goldfinger without ever really capturing his essence. Fröbe, dubbed by British actor Michael Collins, who imitates the German actor's real voice quite well, manages to be larger-than-life while simultaneously underplaying Goldfinger. Only at the end of the film does Fröbe go a bit over the top, though enjoyably so. His megalomaniacal nature actually is very subtly expressed; for the most part, outwardly he looks quite ordinary. And yet there's that giddy, greedy maniac lurking somewhere beneath the surface. He obviously takes great delight in detailing his plans to the group of American gangsters he invites to his Kentucky stud farm - gangsters he knew he was going to kill anyway, as if he just had to tell someone. Goldfinger's real plan, an invention by Maibaum and Dehn that's not in the novel, is brilliant and impressively logical.

For better and for worse, Goldfinger was the Bond film that moved the series into a lighter, less hard-boiled direction, to the eventual dismay of Fleming purists. Some point to the Aston Martin's gimmicky ejector seat as the turning point, but the film even opens with a joke: in the first scene a placid duck in a South American harbor turns out to be a silly disguise, a stuffed bird perched atop Connery's head as he sneaks onshore. Unlike the groan-inducing one-liners of the Roger Moore-in-the-Catskills years, however, Goldfinger's laughs are more character- and situation-driven, such as the kindly-looking granny manning the gate at Goldfinger's smelting factory who whips out a machine gun like Ma Barker when Bond tries to escape in his Aston Martin.

The film's extreme sexism was a reflection of the times (just watch an episode of Mad Men, set in the early-1960s, to see more of the same) but today is so ludicrously misogynistic that it becomes comical, though some women may still find it troubling. The one moment in the film that really dates it is the arrival of the infamously-named Pussy Galore's (Honor Blackman) Flying Circus, luscious blondes in leotards emerging from a half-dozen Cessnas. They're as subtle and believable as the alien vixens from Invasion of the Star Creatures (1963).

Pussy herself - whom Connery with his Scottish accent amusingly calls "Poo-see" - is a thinly-coded lesbian (she declares herself "immune" to 007's charm), as in the book, whom Bond rapes back into heterosexuality. (Incidentally, the filmmakers' erred in billing "Honor Blackman as Pussy Galore" during the opening titles. This always got a laugh, and spoils the gag when she introduces herself to Bond.)

Fundamentally though, the film is as entertaining in 2009 as it was in 1964. The second-unit footage of Miami now is fascinating for its nostalgia value and the Blu-ray disc gives viewers the first opportunity to really study it: the Kentucky Fried Chicken and Joe's Drive-In off of Opa Locka Blvd. (two eggs - 39 cents, gasoline - 28.9 cents a gallon!) I'll bet more than one hard-core Bond fan will try to hunt that street corner down on Google Map's streetview. 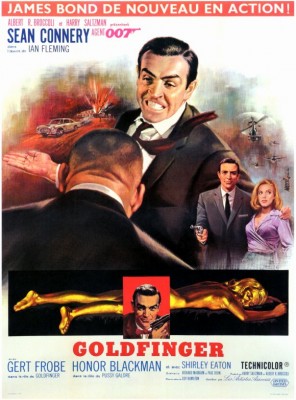 Goldfinger is presented here in its proper 1.66:1 original aspect ratio, pillarboxed with black bars on the sides of the frame. The 1080p, 50GB presentation is outstanding. The painted-gold girls during the opening titles here really are gold, and not the "hot," oversaturated hues of previous transfers. (The laser beam is also vastly improved; now it's a very fine red-hot line, not the thick, oversaturated red optical of old.) The pre-credits opening, which takes place at night, only looks somewhat improved, but after the titles, when the movie fades-in with an aerial shot of Miami, the picture pops into sharp resolution.

The detail at times is incredible: at the 12:33 mark Connery's hairpiece is so clearly visible you can even see the honeycomb pattern around its border. One can also marvel at Lois Maxwell's ("Miss Moneypenny") freckles, or Desmond Llewellyn's ("Q") nicotine-stained fingers. Interestingly, the many process shots - shots you'd image would be glaringly obvious in high-def, actually look somewhat better, maybe because the color has been so perfectly balanced. (The film is shot like many an Elvis Presley vehicle: Connery and the other principals never left England; all the footage in South America, Miami, Maryland & Kentucky, and in Switzerland was accomplished second unit, using doubles, or faked in British locations.) Similarly, some very fake model work near the end looks almost too good; obvious wirework highly visible in a few shots has vanished, possibly removed digitally?

As stated above, the DTS HD 5.1 Master Lossless Audio improves on the original mono presentation, enormously boosting John Barry's great score while adding some directionality to the sound effects. Also included is the original 1.0 mono, and 5.1 Dolby Digital tracks in Spanish and French, with optional subtitles in English, Spanish, Cantonese, Mandarin, and Korean.

The supplements all are carry-overs that originated either in the October 1999 "Special Edition" or the November 2006 "Ultimate Edition" DVDs (and some of the material appeared even before that, on laserdisc): 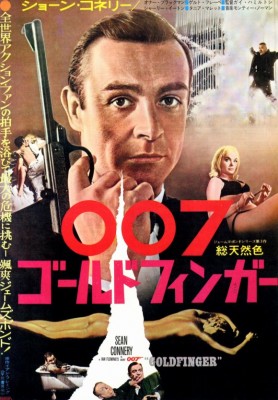 Despite complaints about the menu screens and an uninspired repetition of older supplementary material - I wish somebody would pay Connery the money he quite reasonably wants and get him to sit down to interviews to accompany each film - it doesn't really get any better than this. No, Goldfinger is First Class James Bond, a winner all the way, a film that's still thrilling audiences all these years later.

** I refer, of course, to the time left remaining on the atomic bomb's time code/ticker once it's deactivated. If you don't remember, see the film.