Gripping and heartbreaking. E1 Entertainment and Cineflix International have released Mayday - Air Disasters, a fascinating 2003 cable series from Canada that originally aired as Air Emergency on the National Geographic Channel in the U.S. (and under the name Air Crash Investigations in Canada). This two-disc release includes all six episodes from the series' first season (that pertinent info isn't mentioned on the DVD case - a marketing flub, there), where real air crashes (and some near-crashes) are painstakingly examined. The technological aspects of the investigations are minutely detailed, but the human element isn't ignored, either, with victims' families and survivors interviewed to make these air crashes, which always seem so anonymous when we read about them or hear about them on the news, resonate emotionally for the viewer. 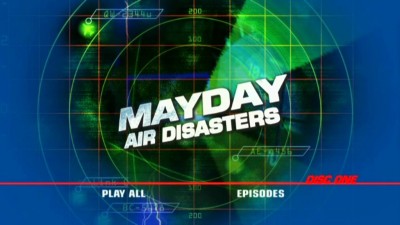 Mayday - Air Disasters follows a fairly standard investigative documentary format. Through narration, the events and conditions leading up the accidents are introduced, as we get a mixture of interviews with air crews, investigators, victims' family members, and survivors (if any), along with recreations of the actual accidents, which include actors portraying the pilots (with their dialogue and actions based on actual "black box" flight recorder transcripts), crew, air traffic controllers, and passengers, as well as CGI depictions of the aircrafts under duress. While Mayday - Air Disasters may not be original in its structure, what did distinguish the series from many others like it that I've watched, was its grim-faced intensity and suspense, its thoroughness (and felicity) in unfolding the causes of the accidents for the lay viewer, and most importantly, the non-exploitive manner in which it treats the victims and their families in an effort to humanize these terrible events. All three of these elements are smoothly combined to give the Mayday - Air Disasters episodes an informative and emotional weight that I found quite outside the normal cut-and-dried, un-involving investigative docs that are so prevalent on cable channels today.

These first six episodes of Mayday - Air Disasters, directed by Greg Lanning, Bernard Vallot, Gary Lang, and Bryn Higgins, are remarkably tense little thrillers right from their beginnings, with Stephen Bogaert's blankly ominous narration setting up in the viewer a sickening dread of what we know is going to happen - that airplane is going to fail, and people are going to die - while the directors ratchet up the suspense as they dispassionately record the futile efforts of the pilots to save their planes. The performances by the actors portraying these pilots are also quite good - something you rarely see or even notice in these kinds of documentary recreations. And with the aid of some serviceable CGI animation of the aircrafts in distress (along with more convincing live-action depictions of the interiors of the aircraft during their incidents), these episodes achieve a level of anxiety and apprehension that I found unusual for this type of TV documentary.

As well, Mayday - Air Disasters brings to its investigative format a muckraking angle that makes the excitement of its action sequences more meaningful. It's difficult to watch these episodes and not get infuriated with the games the airlines play, balancing the admitted realities of the economics of running an airline versus the lives and safety of their passengers. A good example is the opening episode on disc one, Unlocking Disaster, which details the horrifying "accident" that befell United Airlines Flight 811 in 1989. United Airlines and Boeing, the designer and manufacturer of the 747 used here, were both aware for some time of a design flaw on the locking system for the jet's cargo door. Opening out instead of being an inside "plug" door, the locking system on the cargo door had to be of "fail safe" integrity, but poor design (a deadly combination of using aluminum instead of steel for the latch pin locks, along with faulty wiring that allowed motors to inadvertently open the seemingly locked cargo door) ultimately resulted in Flight 811's incident, where the door blew open over the Pacific Ocean, rapidly decompressing the cabin, and ripping out five rows of seats, killing 9 people as they fell to their deaths to the ocean below. The fact that both companies knew what the problem was, and were slow to act on it, along with government agencies giving them too much time (18 months) to correct the problem (because grounded jets cost the airlines millions of dollars per day), compounded by the NTSB blaming ground crew personnel for an inherent design flaw, combines to create both absolute dread at the thought of ever getting on a plane again, and disgust at the cold, calculating venality of the airlines. Pilot error is also a factor in some of the accidents looked at here in Mayday - Air Disasters, but after the episodes make it sickeningly clear how one error in judgment can be compounded by the exponentially accumulating stress factors involved in flying a complex, computer-and-gauge-laden modern jetliner either besieged by mechanical problems or extreme weather conditions (or both), those isolated moments of human frailty pale in comparison to the calculations of airline companies "playing chicken," as one survivor of a crash states, with people's lives.

That particular episode, Unlocking Disaster, also highlights Mayday - Air Disasters' quite affecting use of victims' stories to give true meaning to these recreations. Never at all exploitive in nature (we never get the feeling the episodes are offering up these disasters to give viewers a vicarious thrill), these brief looks at some of the people who died in these accidents are heartbreaking to watch. In the case of Unlocking Disaster's Lee Campbell, a young man killed in a horrific manner during the Flight 811 accident (it's possible that he may very well have been alive during his four minute fall to the ocean surface), the efforts of his parents, Kevin and Susan Campbell, to force the truth out of Boeing, American Airlines, and the National Transportation Safety Board about what happened to their son, was as heroic as it must have been heartrending. Mayday - Air Disasters creates an indelible portrait not only of Flight 811's accident, but of the human cost of that accident you won't soon forget. 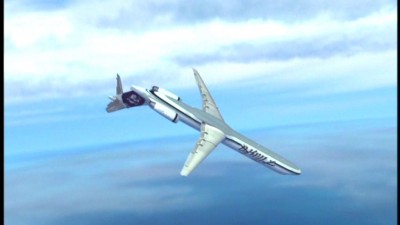 Unlocking Disaster
United Airlines' Flight 811 accident over the Pacific Ocean, on February 24, 1989, is examined here. An inadequate locking system on the Boeing 747's cargo door, along with faulty wiring to the motors that controlled those locks, were to blame for the deaths of nine people as they were sucked out of the decompressing jetliner cabin.

Racing the Storm
American Airlines' Flight 1420, on June 1, 1999, tries to navigate down "the bowling alley" clearance between two approaching thunderstorms and badly miscalculates the danger. Mounting pressure inside the cockpit, as the pilots are forced to calculate more and more variables in their descent to Little Rock National Airport, contributes to a failure to deploy the McDonnell Douglas MD-82's wing spoilers during landing, resulting in the plane sliding past the runway's end, and smashing through several barriers to stop on the Arkansas River banks. 11 people are killed.

Fire on Board
Swissair's Flight 111, on September 2, 1998, crashes into the sea near Halifax, Nova Scotia, killing 229 passengers and crew. Faulty wiring to the newly installed in-flight entertainment and gambling systems in First Class and Business are to blame when a fire starts in the cockpit. Crosstalk between the pilots also obscures a message from the tower that they must land immediately; instead, still unaware of the severity of their situation, they divert their McDonnell Douglas MD-11 from the airport to dump fuel. However, later studies show no course of action could have saved the doomed airliner.

Flying Blind
Aeroperu's Flight 603, having just taken off from Lima's Jorge Chavez International Airport on October 2nd, 1996, immediately encounters conflicting computer instrumentation readings, effectively blinding the pilots during this nighttime flight. Their Boeing 757, one of the most advanced jetliners at that time, is unable to function correctly because simple masking tape was put over the Pitot Static ports (that measure speed and altitude for the plane) during the jet's cleaning at the airport. Unable to determine their altitude, the jetliner wings into the ocean, killing all 70 onboard.

Cutting Corners
Alaska Airlines' Flight 261, en route to Seattle, encounters catastrophic trim horizontal stabilizer trouble near San Francisco, as the pilots try to fly the doomed McDonnell Douglas MD-83 jetliner. A later investigation reveals that illegal cost-cutting methods at the maintenance level caused the stabilizer's jack-screw to go without any grease (critical to the rate of wear on the part), causing the stabilizer assembly to break free entirely from the tail. The plane plunged into the Pacific, inverted, as the pilots still vainly tried to right the plane. All 88 aboard are killed.

Flying on Empty
A potential disaster averted. Air Transat Flight 236, en route to Lisbon, encounters a strange oil pressure reading that is initially discounted. An imbalance in the fuel tanks is seemingly corrected by opening a cross-flow valve, but the pilots are unaware of a massive fuel leak (caused by an improper fitting on a fuel line) which causes both tanks to empty. The Airbus A330 glides over the ocean for almost one hundred miles with no engines, as the pilots successfully land the airbus (which was coming in dangerously fast). Faulty maintenance and pilot error are the causes of the near-accident, but pilot skill saved 306 passengers and crew. 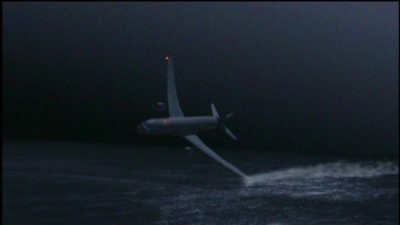 The Video:
The anamorphically enhanced, 1.78:1 widescreen image for Mayday - Air Disasters is better during the live-action footage, but the CGI stuff is a little soft. Colors are generally well balanced, and compression artifacting is negligible.

The Audio:
The Dolby Digital English 2.0 stereo audio mix is nicely balanced during some of the flying sequences, while all dialogue is heard cleanly and crisply. No subtitles or close-captions are available.

The Extras:
There are no extras for Mayday - Air Disasters.