Wages of Fear - Criterion Collection, The

The Criterion Collection // Unrated // April 21, 2009
List Price: $39.95 [Buy now and save at Amazon]
Review by Stuart Galbraith IV | posted April 16, 2009 | E-mail the Author
Though deeply cynical and ironic, with a healthy dose of anti-American/anti-capitalist criticism underpinning its story, Henri-Georges Clouzot's The Wages of Fear (Le Salaire de la peur, 1953) mainly is nothing more or less than an ingeniously simple yet incredibly suspenseful and utterly engrossing story, with four richly-developed characters. Even if you've seen it before, even if you're aware of the story's outcome and the fate of its characters, it's still almost impossible to take your eyes off it, so well-crafted is its nail-biting tension.

Criterion released a standard DVD edition in 1998, the early days of that format (it was spine #36), with a good transfer of the complete film - prior to 1991, all U.S. editions had been heavily cut - but except for a very brief essay it had no supplementary material. Conversely, the new Blu-ray edition offers the same 90 minutes worth of interviews and other featurettes that were on their October 2005 two-disc reissue, and though the newer transfer gstill isn't up to the level of the best black & white, full-frame transfers on Blu-ray (and the late, lamented HD DVD format) so far, it's still a substantial upgrade from the now 11-year-old original standard-def version. (Like many consumers, this reviewer snapped up the first release but skipped the reissue, and am glad I waited for this Blu-ray version.) 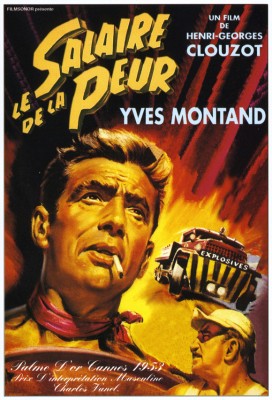 The film takes place in an unidentified South American country in a hellhole of an isolated desert town named Las Piedras, where its small international airport attracts the dregs of the world, lost souls of myriad nationalities in a squalor-filled, indefinite holding pattern, a veritable purgatory. (Appropriately, the picture's penultimate scene, with a raging inferno in the background against a black sky, could be described as Hell itself.) Vultures populate the main street, and in one of the first shots a child is seen playfully torturing some insects, anticipating the opening to Peckinpah's The Wild Bunch.

Though everyone in town is virtually penniless, nearby an American oil company, SOC, operates a modern refinery. When, 300 miles away, one of their wells catches fire, SOC executives determine that the only way to extinguish it is to transport truckloads of nitroglycerine from Las Piedras. The road/pipeline between the town and the well is primitive at best and extremely hazardous; combined with the volatile nature of the nitroglycerine the task is almost suicidal.

Wanting to avoid trouble with unionized SOC employees, the company turns to the jobless tramps in Las Piedras - "Besides, they'll work for peanuts!" - each desperate to get out of the country and willing to risk their life for the $2,000 SOC offers them. (The film could quite appropriately be remade today as a story set in Iraq, with Halliburton replacing SOC.)

Eventually Bill O'Brien (William Tubbs, misidentified as blacklisted actor Lloyd Gough on Wikipedia) selects four men to drive the two big trucks: young, handsome Corsican playboy Mario (Yves Montand), who is having an affair with Spanish waitress Linda (Véra Clouzot); Italian Luigi (Folco Lulli), whose cement-lined lungs have him at the brink of terminal illness; well-groomed German Bimba (Peter Van Eyck), who had slaved as a prisoner in Nazi-controlled salt mines during the war; and Russian Smerloff (Dario Moreno), who mysteriously disappears the night of the departure and, possibly, was murdered by his replacement, the unsavory ex-gangster Jo (Charles Vanel), a Frenchman.


The convoy, with Mario and Jo in the first truck and Luigi and Bimba in the other, face one harrowing obstacle after another, from a washboard-like stretch of road where the drivers must drive extremely fast or extremely slow to avoid the deadly vibrations; a sharp turn in the mountains that forces the trucks onto a rotting wooden platform threatening to give way; and a massive boulder blocking their path, compelling them into increasingly desperate means to keep the convoy moving.

The Wages of Fear is a great film, its greatness rooted in the intelligently crafted building of its suspense, and through its strong characters and especially their relationships to one another. As novelist Dennis Lehane (Mystic River) notes in his essay accompanying the Blu-ray disc, the picture works because of its unsentimental humanism, "that by removing all hint of subjectivity from the point of view, one thus removes any stain of sentimentality," he writes. "This erasure of sentiment does not cancel out our sympathy. In fact, in that very void, we, the viewer, are forced to decide what our capacity for empathy is."

They are from disparate countries and cultures yet like soldiers the life-and-death experiences they share binds them intimately and forever. With the acrimonious relationship between Germany and Italy during the war still fresh on the minds of 1953 audiences, it is ironic that the German and Italian, who couldn't be less alike, form a much better (though ultimately not any closer) working relationship than the two seemingly like-minded Frenchmen.

Indeed, the crux of much of the drama is how, in the first-half of the picture, Mario is attracted to the common origins he shares with Jo (they remember the same tobacco shop in Paris, etc.) and the weighty authority he throws around in Las Piedras, despite being as broke as everyone else. Mario quickly becomes Jo's lackey, and this destroys Mario's friendship with roommate Luigi, an unpretentious salt of the earth character, and the tension between the three remains palpable for the rest of the picture.**

Once on the road, however, the aging Jo (Vanel was 60 at the time)* completely loses his nerve, gradually becoming useless to a disgusted Mario. It's an amazing character transformation, and Vanel's range is breathtaking. Montand, up to then primarily a singer not taken seriously as an actor, gives his first important performance, and his climatic scenes with Vanel are transcendental, recalling William Wellman's similarly indescribable bonding of men under fire.

The Wages of Fear looked just fine in standard definition but the new Blu-ray pushes it several steps further, capturing more nuances in the actors' subtle performances (the nervous sweating, the deep lines in Vanel's features), and especially the textures and hazards of those treacherous 300 miles: the glean of the oily lake near the end, the bamboo forests, the omnipresent SOC logos). A 35mm fine-grain master was sourced as opposed to the original camera negative, but Criterion has digitally restored the film, cleaning most of the dirt and debris away, so that otherwise it looks almost new. The uncompressed mono audio is fine and the English subtitles are excellent (the font, whatever it is, looks good and isn't distracting). 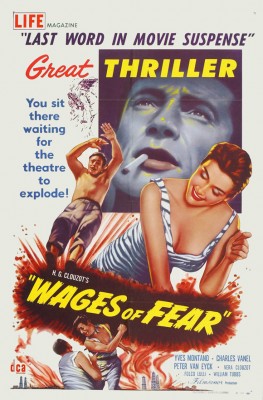 Criterion's original DVD had no extras save for a brief essay by Danny Peary. That's gone, having been replaced by a more insightful one by Dennis Lehane. (The packaging overall is also far more attractive than the old DVD.)

Like the new essay, the extras are all carry-overs from the 2005 reissue. The main supplement is a 52-minute documentary, Henri-Georges Clouzot: The Enlightened Tyrant, a 2004 French show in 4:3 standard-def. It's pretty good if not great, although it does paint an interesting, at times unflattering portrait of the filmmaker. Censored, running 12 minutes, is an informative, well-researched examination of the cuts made to the 1955 U.S. release version, supported by documents and clips from the film. A 1988 Yves Montand interview for French television only briefly mentions The Wages of Fear, but Montand is charming and still handsome late in life, a pleasant sight. Interviews with assistant director Michel Romanoff and Clouzot biographer Marc Godin are worthwhile, with Romanoff expanding on his interview in the longer Clouzot documentary, and Godin putting the film into career perspective.

Superbly crafted and exciting, but with an intelligently-written, uncluttered story populated by three-dimensional characters at its core, The Wages of Fear is another must-see, an acknowledged masterpiece for more than half a century, further enhanced in its Blu-ray presentation. A DVD Talk Collector Series title.

* However, as Sergei Hasenecz points out, "You have to wonder, how did the oil company get their oil rigs and equipment to this remote location in the first place, and how do they keep the workers there supplied without easier access and better roads? And why can't they fly the nitro in?"

Excerpts from Stuart Galbraith IV's book The Emperor and the Wolf appear in the liner notes of Optimum Releasing's new Rashomon DVD. That's news to him and his publisher.