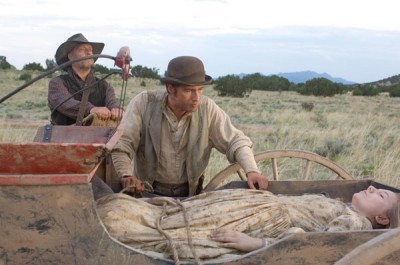 "The Burrowers" promises amazing things just with its premise alone: a monster movie set loose inside the western genre. Perhaps not a novel concept, but it's a fresh perspective in an industry consumed with torture shenanigans and the constant remaking of mediocre Asian ghost stories. "Burrowers" is ripe for a rough and ready Midwestern gorefest throwdown, but that's not the film writer/director J.T. Petty wants to make. The filmmaker is pursuing a more measured, sympathetic take on demons that feast on the gelatinous innards of innocent victims, manufacturing a tediously wandering picture that craves substance while itching to entertain its absurd grindhouse sensibilities.

It's the 1870s, and within the expansive Dakota Territory young Coffey (Karl Geary) has hopes to marry his love. When the young girl and her entire family go missing, foul play at the hands of the local Native Americans is suspected, pushing Coffey to join up with a search party (including William Mapother, Clancy Brown, Doug Hutchinson, and Sean Patrick Thomas) looking to bring the clan home safely. Crossing the land on the hunt for clues, Coffey and the men come across a series of bodies buried in shallow graves; unresponsive, but still living witnesses to a mysterious threat. Learning a race of bloodthirsty creatures known as The Burrowers are on their trail, the gang finds themselves without much hope when the beasts attack, leaving victims in a state of slow paralysis before a buffet of organ munching begins.

It's apparent throughout much of "Burrowers" that Petty is a clear-thinking filmmaker trying to subvert genre expectations with his film. He's giving the core demographic what they want with monsters and carnage, but the director makes the audience work for their sinewy, goopy comfort food, trusting the western trappings might be able to sink in and surprise along the way. To stand outside of "Burrowers," it's easy to value the special effort made by Petty and his crew. Sitting through this glacial picture is an entirely different story, as both imposing sides of the screenplay fight for attention, leaving a muddled, middling final cut behind.

Petty puts major emphasis on characterization, hoping to build a squad of western archetypes (e.g. The Ex-Slave, The Outlaw, The Powermad Military Leader, and The Affable Prairie Detective) the audience can saddle up with, increasing the payoff reverberation when the third act comes around. Again, an effort to favor dramatics over crass stupidity is a wonderful thing, but Petty doesn't properly juggle the horror and gravitas, often mistaking dry oatmeal sequences of bonding as nuggets of suspense. "Burrowers" drags considerably when the monsters aren't around, leaving much of the film in the hands of the cast, who either turn on the Hormel (Hutchinson and the borderline incomprehensible Mapother) or play up reserve to a point of possible vocational disinterest (Brown).

A race of spider-legged meat-eaters who prefer a nice rotting meal of human flesh, the Burrowers are a fascinating creation, only held back by Petty's low budget. Close-ups of the creatures showcase some cool puppetry and needed strings of slime, but once these babies move, the CG takes over and it's not pretty. In fact, lousy visual effects routinely break the nail-biting spell Petty is hopeful to cast, injecting substandard technology into a picture that's more comfortable with the tranquility of the Earth, nature's splendor, and pioneer fundamentals.

To best represent the monochromatic memories of the era, the visuals of "The Burrowers" have been stripped of their natural colors, reduced to a brownish tint. The anamorphic widescreen (2.35:1 aspect ratio) keeps the gritty, unshaven western details in play during the bright, wide-open prairie sequences. When the action hits nightfall, black levels struggle with a necessary crispness, leaving attack sequences a bit muddy and underwhelming.

The 5.1 Dolby Digital sound mix is filled with surround antics to keep the ears busy, especially when the monsters come out to play. While Mapother's twisty accent loses a line of dialogue here and there, the track delivers clarity in every other way, offering a few claustrophobic, dirt-in-the-face surprises during the presentation. A 2.0 mix is also available.

A feature-length audio commentary from director J.T. Petty and actor Karl Geary reveal the pair to be in quite a giggly mood. Sharing inside jokes and tidbits of cowboy history, the men deliver an appealing chat on the troubles of making a low-budget western in New Mexico. Petty is an intelligent guy who really researched the living daylights out of the picture, not to mention ingesting a steady diet of "The Searchers" for inspiration. It's an informative track for fans of the picture, offering the listener a nice assortment of filmmaking adversity stories to appreciate.

"Making a Horror Western" (5:56) is a brief collection of on-set reflection about the film. Interviews with cast and crew talk up the grueling physical challenges and location hazards, while BTS footage shows off the controlled chaos of the shoot. Good stuff here, but far too short.

"Digging Up The Burrowers" (4:49) sits down with Robert Hall, creature designer of the film. Showcasing the multiple technical incarnations of the titular creatures, the featurette eventually settles on Bonnie Morgan, the eccentric actor who plays "Burrower #1," to speak about her experience inside a rubber suit.

Native American characters are brought in to "Burrowers" to underscore the White Man's violation of natural resources, inadvertently leading to the demonic attacks. It's a familiar page of historical discomfort Petty summons to lend his monster movie some verisimilitude, but it's never manipulated interestingly, ending up another distraction in a film that's plagued with many. "The Burrowers" is determined to get somewhere profound with a strange brew of perspectives, but it rarely electrifies, making the promise of a sequel at the end of the film feel more like a threat.