Shout Factory // Unrated // April 21, 2009
List Price: $39.99 [Buy now and save at Amazon]
Review by Stuart Galbraith IV | posted April 18, 2009 | E-mail the Author
Though it managed to hobble along through five occasionally stormy seasons, Rhoda - Season One (1974-75) isn't just the one season unequivocally worth having, at its best it's great television comedy equal to the wonderful series it spun-off from, Mary Tyler Moore.

Unfortunately, Shout! Factory's "35th Anniversary Edition,"* while attractively packaged and supplemented with a new featurette, is a major disappointment, and an early contender for the "Worst DVD of 2009." The transfers are simply pathetic, the kind of thing one expects from a fly-by-night public domain outfit but not major home video labels like Shout! Factory and 20th Century-Fox, from whom the series was licensed.

To charge $39.99 for cut and time-compressed episodes that look no better and possibly worse than if they had been taped off broadcast airings is nothing short of highway robbery. How bad is it? Guest star Mary Tyler Moore's entire scene is missing from the pilot episode, which is presented here in a version cut for syndication. Dirt and video tape wrinkles, the kind of thing heretofore only ever seen on the cheapest-of-cheap PD labels, turn up frequently here. More on this home video travesty below. 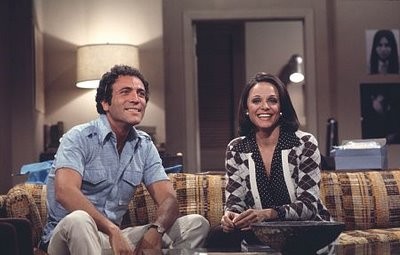 Mary Tyler Moore (1970-77) was blessed with a dream ensemble cast. Frequent guest star/semi-regular Cloris Leachman won an Academy Award (for The Last Picture Show) in the middle of MTM's second season, and by 1974 Moore and co-stars Ed Asner, and Ted Knight all had won Emmys.

Valerie Harper, who played Mary Richards' (Moore) acerbic upstairs neighbor, Rhoda Morgenstern, fared even better, winning three Emmy Awards as Best Supporting Actress in a Comedy in as many seasons. According to co-creators James L. Brooks and Allan Burns, Harper's popular and critical success led to offers left and right from other producers for Harper to star in projects of her own.

And so the decision was made to move Rhoda out of Minneapolis and back to her old digs in New York City. In the first batch of episodes, Rhoda is only planning to visit with her younger sister, Brenda (Julie Kavner), mother, Ida (Nancy Walker), and father, Martin (Harold Gould), but while there she meets and falls in love with the divorced owner of a demolition company, Joe Gerard (David Groh). They have a whirlwind courtship, and the two get married at the end of the eighth episode. Arguably, then and there Rhoda "jumped the shark."

On Mary Tyler Moore, Rhoda had agreeably contrasted the tasteful, beautiful, and ever-tactful Mary Richards. Rhoda by contrast was loud, plain-looking, and unhesitatingly candid. Where Mary was an idealization of the '70s liberated woman, Rhoda was the reality. Mary was the kind of woman who never worried about eating yet always stayed thin. With self-effacing good humor, Rhoda struggled with her weight and when, with Herculean effort she successfully dieted, it struck a nerve with women across the country. As my colleague Paul Mavis put it, "the key to Rhoda and Mary is: Mary is the girl you'd want to marry, but Rhoda is the girl you'd cheat with."

By the time Rhoda moved back to New York, Rhoda had fully-blossomed from ugly duckling (well, maybe plain-looking duckling) to beautiful swan and her marriage to handsome and sensitive Joe completed the fantasy. It also sucked a good chunk of the comic potential from the program. Later on, when the producers/writers realized their mistake, they decided to have Rhoda and Joe separate and divorce, convincing themselves they were breaking new ground exploring the comedy potential of those taboo subjects. The problem was divorce isn't very funny, no matter how you slice it.

There wasn't much to fall back on. As a character Joe was poorly-conceived; he was so idealized in the early episodes that he tends to come off as a hot-head when the show's writers belatedly tried to bring him back down to earth. Unlike Mary Richards (and Mary's predecessor, Rob Petrie), there was no workplace to alternate with Rhoda's home life; she continued to work as a window-dresser, free-lancing from assignment to assignment, and workplace-rooted episodes were rare.

Rhoda's saving grace was the ingenious casting of Walker, who had already appeared multiple times as a guest star on Mary Tyler Moore, and newcomer Julie Kavner (The Simpsons), in the key role of Rhoda's younger sister, who for Rhoda is "like looking into an old mirror." Brenda is Rhoda 10 years younger, the Plain Jane who makes a beeline to the refrigerator at the first sign of trouble. Harper and Kavner don't look all that much alike and yet are completely convincing as intensely close sisters, and they in turn are believable as the adult children of the diminutive dynamo Ida, TV's ultimate Jewish Mother.

Where Rhoda works phenomenally well is when episodes concentrate on their relationship to one another. The second episode, "You Can Go Home Again," is an illustrative example, with Rhoda moving back into her parent's apartment until Ma works up the courage to kick her daughter out of the nest, for her own good. It's a touching, hilarious episode, as good as anything on Mary Tyler Moore. Other early shows like "Parents' Day," "The Shower," and "Rhoda's Wedding" all have great moments between the two sisters, and between mother and daughter. Walker, with her marvelous deadpan delivery, is a scream. And "Rhoda's Wedding" is all by itself a justly celebrated moment in television comedy history. With most of Mary Tyler Moore's cast in attendance, it's one of the funniest and finest hours of '70s television comedy.

Rhoda - Season One is presented on four single-sided, dual-layered discs. Unedited shows run approximately 25:30, as is the case with, for instance, "Parents Day" and "The Lady in Red" on Disc 1. However, most of the shows run about 22:40-50, which is true of the other four episodes on this disc. These shows all seem to be cut and/or time-compressed - note how Harper's voice sounds sped up during the otherwise terrific opening titles. On disc two all of the episodes are short except for (thank goodness for small favors) "Rhoda's Wedding," a special episode that runs 51:21 and appears complete. It even includes a show "bumper" in the middle of it.

The complete shows look and sound no better than fair, but that would have been okay if the entire set consisted solely of these unedited episodes. Instead, the cut/compressed ones that dominate this set aren't just incomplete; they have the added insult of looking like something that used to air on UHF channels in the middle of the night back around 1981. The audio is poor, the film elements are so dirty that at times they resemble work prints, the colors are muddy and the audio poor, and they're obviously sourced from old tape masters with video drop-outs and other problems.

Shout! Factory's disclaimer preceding the episodes insist they've been "compiled from the best possible surviving masters," but that's disingenuous. Significantly, nowhere on the packaging is there any mention of this - "Gee, we didn't tell you this before you bought it and took it home? Oops!"

Regrettably, home video labels are notoriously tight-lipped when a major screw-up like this occurs; they tend to hide their heads in the sand like a flock of ostriches. At a guess the poor masters were likely provided to Shout! by Fox, and rather than reject them outright for failing to meet minimal standards for this kind of thing, they went ahead with what they were provided with, consumer be damned.

The particulars of Shout!'s agreement with Fox is, of course, unknown. During the time I worked at MGM we distributed a batch of old Cinerama Releasing Corporation titles (Krakatoa, East of Java, The Last Valley, etc.) which were actually owned by Disney. Disney provided MGM with poor 4:3 letterboxed masters of these films, instead of 16:9 enhanced ones. MGM's Technical Services Department tried to persuade Disney to provide better masters but they wouldn't budge. But guess who got blamed in the end? You got it - MGM.

As with the MGM-Disney deal, Shout! could have and maybe even tried to persuade Fox to create new and better masters but, of course, this would have cost money. Understandably, Fox rather than Shout! should pay for any remastering - after all, it's Fox's show and Shout! has only limited rights, plus Fox would benefit in the end because, once remastered, Rhoda could be licensed in other markets and media, and in high-def. At the same time, however, Shout!'s declaration the episodes were "compiled from the best possible surviving masters" misleadingly implies better masters aren't possible and that the original film elements are either lost or in an unusable condition. This is hogwash. In all likelihood original 35mm elements exist and are no better or worse off than other filmed sitcoms of its era. Fox is simply being cheap and Shout! misleading, with the consumer short-changed.

The only supplement is Remembering Rhoda, a ten-minute interview with co-creators James L. Brooks and Allan Burns. It's okay; they discuss the show's genesis, what it was like working with Harper, Kavner, and Walker, and why the show didn't really work after Rhoda's wedding to Joe.

Rhoda's first season is excellent, but I can't recommend this expensive DVD because its transfers are an insult to consumers and to the DVD format itself. When DVD resembles taped-off-the-air VHS, it's time to say Skip It, no matter how good the show.


* Back in 1993 there was a "35th Anniversary" laserdisc edition of Marjorie Morningstar, like it made any difference. What's next? A 43rd Anniversary Special Edition of Star Wars? A 72nd 1/2 Anniversary CE of I Love Lucy?


Excerpts from Stuart Galbraith IV's book The Emperor and the Wolf appear in the liner notes of Optimum Releasing's new Rashomon DVD. That's news to him.