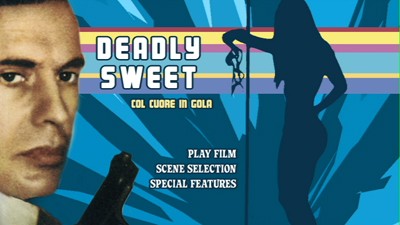 It's a story just like any other. A guy sees a girl in a nightclub, thinks she's sexy, and asks around about who she is. The scoop is that her father has just died, and the girl, Jane (Ewa Aulin, Candy), is hiding her grief in the nightlife, consoled by her partner in questionable activity, her brother Jerome (Charles Kohler). Her stepmother (Vira Silenti) is there, too, dancing with her lover. Before the interested guy, Bernard (Jean-Louis Trintignant, A Man and a Woman), a fellow of questionable repute himself, can make his move, however, the girl is gone and he's also told that his tab has been cut off, he's too deep into Prescott, the nightclub's owner. As if having the flow of booze cut off wasn't bad enough, when Bernard goes to settle things with Bernard, he finds the man dead in his apartment with Jane standing over the body. She insists she didn't do it, casting suspicion on her brother and whoever else will fit, telling Bernard of an incriminating photograph that could be the motive and that also appears to have gone missing.

That's all pretty unimportant, though, and the particulars aren't likely to become any more clear even as Jane and Bernard are on the run, chased by one of Prescott's former henchman (Luigi Bellini, playing a character named Jelly-Roll), harassed by a perverted midget, and building up a body count as they go. Imagine an Italian producer went to director Tinto Brass and said, "We want a version of Breathless set in swinging London, but leave out all those fancy arty-farty French pretensions," and you'll start to get an idea of what Deadly Sweet is like and why plot is secondary to any discussion of the movie. Retitled from the original Italian Col cuore in gola (His Heart in His Mouth), this 1967 pop-trash cinegasm couldn't care less about its own internal mystery. I've often pondered if movies were invented as an excuse for guys to run around with their friends shooting guns and tricking girls into getting naked, and Deadly Sweet would add weight to that theory. Much of it is shot on the street, with Bernard as a sort of private-eye type running an anarchic race through Piccadilly Circus and other London areas, complete with befuddled bystander reactions--including one hilarious sequence where the same people continue watching Bernard and Jane from their houses even though the double-decker bus has been in motion the entire time. This is the kind of logic we are working with. Cinema verite that has long since given up on the verite and started swinging for pure moviegoing indulgence.

And that's both a positive and a negative. I'm not a fan of "so bad it's good," but Deadly Sweet manages to flirt with the idea in ways that are oddly compelling. Often poorly shot and regularly poorly acted, Brass' movie makes up for its obvious failings with pure chutzpah. The film is a pop art delight. Images on the walls of Bernard's apartment include Lon Chaney as the Wolfman, Humphrey Bogart, and Batman comic book panels. The latter's TV adventures are mimicked in fantastically cheap recreations of his Biff! Bam! Pow! rock-'em-sock-'em technique. Street signs and advertisements dictate and comment on the action. At one point, Bernard stands in front of a poster of Alfred E. Newman, the Mad Magazine mascot, and in his broken English, quips, "What? Me worry?" Elsewhere, Bernard quotes classic philosophers like Lao Tzu and follows it with a quote from famed Italian master of ambiguity Michelangelo Antonioni. If Godard's would-be criminal epic wasn't an intended reference point, Antonioni's own crazy London criminal venture, Blow-Up, was. At one point in the movie, Tinto Brass whips his camera away from Jean-Louis Trintignant and zooms in on a Blow-Up lobby card advertising the film's run in a London theatre. Ain't no mistaking that nod. 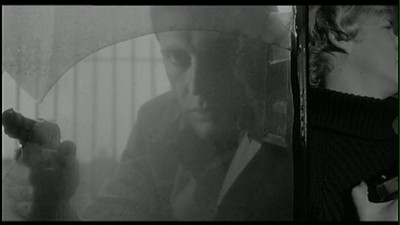 It doesn't stop there, either. Midway through the flick, Bernard drops Jane with his photographer friend David (Roberto Bisacco), who naturally takes some snaps of the lovely gal (Ewa Aulin was a beauty-contest winner) in a manner not dissimilar to the David Hemmings "Yeah Baby" technique from the Antonioni film (later parodied in Austin Powers). It's one of the straighter moments of the movie, so of course it's followed almost immediately afterwards by Bernard playing drums during a music video sequence where Jane dances and then completing an ongoing "Me Tarzan, you Jane" riff by swinging down to Jane on a rope (her last name, Burroughs, is a tip of the hat to Tarzan's creator) so he can make mad, psychedelic love to her. It took three writers to adapt a novel by Sergio Donati into one screenplay, but I have a hard time believing Tinto Brass followed his own outline. I think there was a lot of, "Hey, let's do this" spur-of-the-moment happenings, making Deadly Sweet one of those movies where you are likely to get more hung up on telling your friends every crazy thing that goes on rather than giving full attention to the movie itself. It's equally informed by Richard Lester and Help! as it is by those more high-brow examples, more freewheeling than a more serious director would ever let himself get.

Which shouldn't make you think that all of the style choices are random or that Tinto Brass had no artistic vision beyond the pleasures immediately in front of him. Au contraire. In his own weird way, he is playing as much with the idea of perception in Deadly Sweet as Antonioni is in Blow-Up. In contrast to Jean-Paul Belmondo in Breathless, both Hemmings and Trintignant are not invented by their own crafty mythology, but by the stories their dames spin them and how much they choose to believe. Yet, with truth so out of whack, they begin to see the world differently. Hemmings' character through a camera lens and then through the smaller details of the enlarged image, and Trintignant's Bernard through not just the pop culture icons (again reminiscent of Belmondo) but through the enclosed framing of comic book panels (aided by storyboards from European comics legend Guido Crepax) and the director's simulated peepholes. Brass regularly cuts away from the present moment to a disconnected moment, of one portion of Bernard's face, a singular eye spying the action through a limited window of opportunity. It's an image he can't control, either. As the danger increases, the view fractures and turns on itself, a mirror of Bernard staring back at his own reflection. The film stock also switches regularly from color to black-and-white, a criss-cross of the new and the old, of modern filmmaking and the classic thrillers Deadly Sweet looks up to. A world of loose morals vs. one with a strict code. It's also the framing of a television, the squared-off picture, and it's the framing that breaks down when Bernard tumbles into sketchy mental territory. Brass slashes his film--both literally damaging the image and also with rapid splices in the editing bay. The edges distort, and Bernard's vision grows even more cloudy.

The ideas are sophisticated even if the delivery is not. Brass bludgeons the film together with sledge hammers and two-by-fours. Deadly Sweet borders on trash and teases with exploitation, including scenes of Bernard being tortured and Jane being ogled in her underwear. It's lurid, but largely inoffensive. It's a genre-bending corker, squishing together as much visual media as the late 1960s could handle, the hyperactive little brother of the period's art house darlings. It's fun to look at, and so never boring to watch--even when maybe it should be.

Considering the movie's fixation on Jane, Deadly Sweet probably couldn't end up anywhere else. In one way, it goes full circle, right back to a party and right back to what originally caught Bernard's eye. These are also the two darkest scenes in the picture, the interior of a night club being not unlike a dank underworld. The maguffin has been there all along, Bernard is a victim of his own failure to see the truth, and the promise of the title comes true as the deadly emerges from the sweet. No more flash, unless you count the explosion of a pistol being fired. It's satisfying in its inevitability and its conforming to genre expectations--and also for bringing us back down to Earth after the visual highs that preceded it. 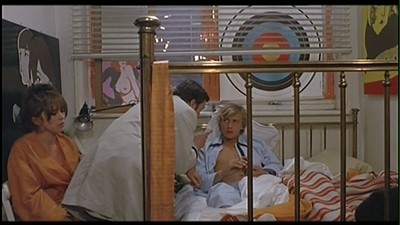 Video:
Shot at a 1.85:1 aspect ratio, the movie is given an anamorphic transfer in the same scope, and it's a fairly clean print. Some schmutz appears here and there, including an obvious chunk of something at the top of the screen for about twenty seconds or so. The colors are good, though I did see some haziness in background shadows. There is also some interlacing that causes slight distortion.

The Region 0 disc boasts a "restored, uncensored Director's Cut" that matches the original theatrical release of the movie. The box claims it is 105 minutes long, IMDB says 107, but my DVD player counted about 100 minutes. Where the discrepancy lies is something I have not figured out, possibly a conversion speed-up. From what I can tell, this is still the uncut version as promised, including the quick cutting that occurs in some of the more crazy sequences and that has been absent from some other home video versions. 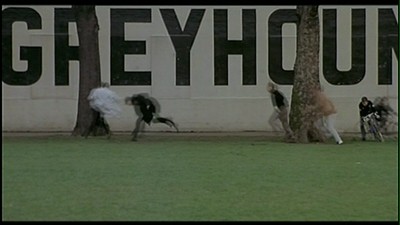 Sound:
The Italian soundtrack is available in a basic stereo mix, a little tinny at times, but even that kind of fits the kitschy nature of the film. I love the music in the movie, and it actually sounds a little better for not being overly mixed for modern stereos.

The optional English subtitles are good, though a little fast at times.

Extras:
The main extra here is an English-language audio commentary with director Tinto Brass. He speaks at length about the film's production, from its inception to its creation and his intention with his various choices, and even the reception and travels of the movie.

There is also a gallery with a handful of lobby cards and the original theatrical trailer.

FINAL THOUGHTS:
Recommended for those who might like this sort of thing, as Deadly Sweet is really too gonzo to be considered general entertainment. This loopy crime thriller is a pop-art sensory assault, full of rapid-fire images and the style and flair of Europe in the 1960s. Story is secondary to the sights director Tinto Brass shoves through his editing machine. Deadly Sweet walks a fine line: not tight enough to be a standard murder movie, not trashy enough to be the most lurid of Eurotrash. It works, though. Consider it an overly decadent dessert full of too many empty calories; you know you want to eat it, so why not give in? 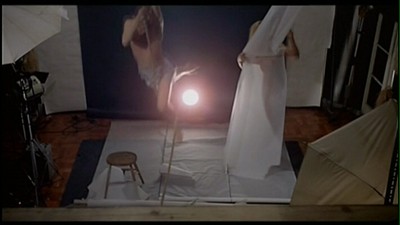