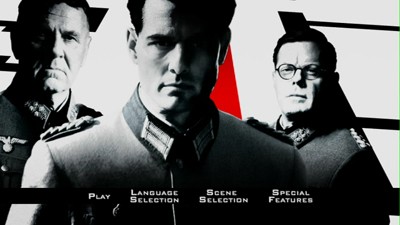 Bryan Singer's Valkyrie could end up becoming one of those textbook cases of "What went wrong?" Though the Tom Cruise WWII-vehicle started with high aspirations, an instant confluence of hype and snark ensured the film was somehow only ever going to reach the middle distance in all things. A tepid critical response, respectable but not dynamic box office, and, if word of mouth was to be believed, complete public indifference made Valkyrie appear to be more of a failure than it likely was. From the director who changed superhero movies with the first two X-Men flicks and nearly did the impossible and made Superman interesting, and from a former box office juggernaut like Cruise, more was expected than just barely making the studio's money back.

Of course, such talk was soooo last December, and in this current movie market, DVD gives a movie like Valkyrie another chance to prove itself. People will rent a film they wouldn't otherwise see in the Cineplex. It's why DVD Talk has a "rent it" category vs. saying skip something altogether. Most movies have something in them worth seeing.

It's damning with faint praise, but Valkryie isn't a bad movie. It's also not a great movie. That middle ground where it found itself stuck in is really where it belonged. This is a very down-the-middle movie in all things.

As most people probably know by now, Tom Cruise plays Colonel Claus von Stauffenberg, a German patriot who doesn't believe that Adolf Hitler (David Bamber) is doing the country any favors with his insane policies. After being severely wounded in Africa, Stauffenberg is sent back to Berlin where he is promptly recruited by a cabal of similar minded patriots to try to assassinate the Fuhrer. Convinced that the men--who include Terence Stamp, Kenneth Branagh, Bill Nighy, and many other fine British actors--don't have a proper exit strategy, Stauffenberg (played by a can-do American) takes one of Hitler's own contingency programs, Operation Valkyrie, and adapts it to their purposes. Valkyrie is meant to secure the government should something happen to its leader, and maneuvered the right way, the coup could take out Hitler and the SS all at the same time.

With this new plan in place, Stauffenberg takes charge, and we see first a failed attempt at assassination and then finally what he thinks is a successful termination, sending him rushing back to Berlin to finalize his goals. And herein lies Valkyrie's major stumbling block: though Singer and his writers, Christopher McQuarrie and Nathan Alexander, play the shell game where they move stuff around and keep the audience from ever really seeing what happened when Stauffenberg's bomb went off, everyone knows what happened. It's only a matter of time before Hitler is going to emerge again, ugly moustache and all.

There have been movies made around foregone conclusions before. Some even start by showing us where they are going, and then we backtrack to see how things fall apart. It's not an impossible task, and there is tension to be had even in Valkyrie. The actual assassination attempts have a ticking-time-bomb quality (literally), and Singer puts together a clench-inducing sequence of events that should get just about any cinephile sweaty with anticipation.

Unfortunately, that explosion is the last real bang Valkyrie has. From there, it's fairly procedural, watching Stauffenberg and crew go through the motions of taking over the government while we wait for the worm to turn. It's about as interesting as watching a TV dinner spin in the microwave. You know that's turkey in there, so will the bell just go off and signal that it's time to eat? Bryan Singer reportedly got insane about getting the details right, and though his diligence shows on the screen, it's also about all that shows. A dogmatic dedication to the epaulets on Tom Cruise's uniform could have been sacrificed, one supposes, for a more dramatic script or a less starchy performance from the lead. Pretty much all the actors walk around with an equal stiffness, working their lines with a regimental sameness that seems almost ironic given the subject matter. Only Tom Wilkinson manages to retain his personality, playing General Friedrich Fromm, a dissenter who could be the swing vote in any plot. Just as in his cameos in movies like Cassandra's Dream or even larger supporting roles like Michael Clayton, the moment Wilkinson steps into frame, his command of the set is clear. If the troops were going to get in line behind anybody, it should have been this Tom and not the other one.

When it comes down to it, it seems to me the one place where the filmmakers decided that details were decidedly unimportant was the men themselves. Who were they? What drove them to join this plot? That last question has some obvious answers, sure, but certainly there were personal motivators for each. Simply knowing what they did and what it could have meant had they succeeded isn't enough. The tension should have come from the personal travails, the heroism from the sacrifice. These men were real, but Singer seems content to peer at them from a distance. Valkyrie is really just the bare facts and thus predictably cold as a result. Is it any wonder, then, that most who saw it were cold to it, as well? 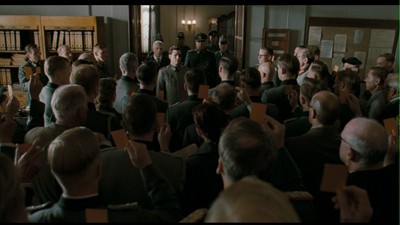 Video:
Valkyrie was shot at a 1.85:1 aspect ratio, and I am sure that the anamorphic transfer on the final product is going to be really good. They normally are on 20th Century Fox discs, but the studio continually insists on sending out blue-backed CD-R press screeners for review, watermarked with ownership information and always a step or two removed from retail quality. If I were to have to judge Valkyrie based on the disc in hand, I'd have to note the spotty colors and hazy blacks as well as the persistent digital artifacting; yet, I just won't score the video at all and we'll have to keep our fingers crossed that Fox will pull off the mission.

Sound:
This falls in similar territory as the video, I don't feel I can judge what is to come based on what I have. The final product is to have a 5.1 Dolby mix of the English soundtrack, and this possibly rough version I heard is better than the video in terms of how it's been copied. This promo DVD indicates a mix that has very good speaker interplay.

French and Spanish dubs are also available in surround sound, and there are subtitles in all three languages. 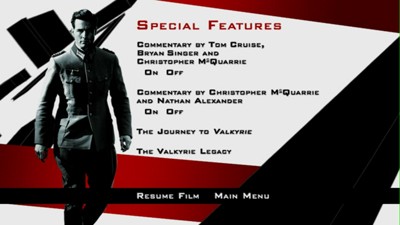 Extras:
This promo appears to be for a single-disc edition of Valkryie, and two audio commentaries lead the bonus feature charge. One features actor Tom Cruise, director Bryan Singer, and writer Christopher McQuarrie; the second is McQuarrie with co-writer Nathan Alexander. Both are exhaustive and interesting talks covering the movie step by step, scene by scene. The two writers talk more about the formation of the script, how to navigate history, and the way what they intended made it to screen. There is some cross-over between the two talks, but the one with Cruise and Singer takes a broader look at the production. If you watch both, you'll likely have all your questions answered.

"The Journey to Valkyrie" is a 16-minute promo featurette tracking the movie from the writers getting hold of the idea, the early production stages and on to Cruise joining the production and how to recreate historical events. Cast and crew are joined by Philipp von Schulthess, the grandson of von Stauffenberg. There is also an interesting split-screen comparison of the actors to the people they play.

"The Valkyrie Legacy" is a 43-minute documentary about the real events and how they affected Germany. Directed by Kevin Burns, I think it may have originally aired on television as a tie-in promo for Valkyrie (though no one from the film appears), and I have read at least suggestion there is a longer version that would have aired over two hours, but based on that same description, everything that person saw appears to be in this cut, so I think that suggestion is false. Regardless, it's an excellent companion to the film, peeling back the layers of history for those interested. It also features descendents of von Stauffenberg and other members of the plot, as well as surviving co-conspirators. It also covers what happened after the events in Singer's movie.

FINAL THOUGHTS:
Though considered unfairly maligned prior to anyone seeing an inch of film, Valkyrie probably deserved the tepid response it got from audiences and critics. Though some obviously loved it and will dispute a Rent It classification, I found the Bryan Singer-directed, Tom Cruise-starring World War II picture to be lost in a middle wilderness and, as a result, kind of dull. Wooden performances next to a plot that can't get around the fact that we know how it's all going to turn out means this movie about the patriots who tried to save Germany from being kicked under the allied bus by Hitler just never gets going. It may be long on facts, but it's short on drama, and is thus disappointing. 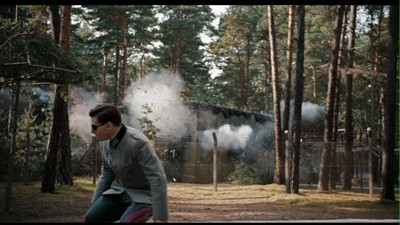