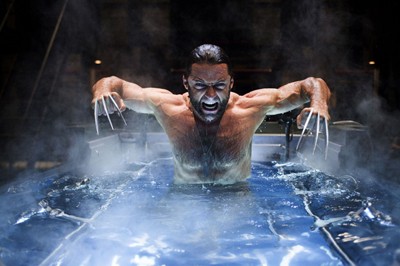 Remember 2008? The summer of that year, that was a great summer for comic book movies. We had Iron Man, we had The Dark Knight, even that second Hulk movie wasn't so bad (though, okay, the second Hellboy kind of was). If you're like me, maybe you got some of those movies in your stocking at Christmas. If you did, take my advice, and at least for now, stay home and watch them and get nostalgic for the good old days--because if X-Men Origins: Wolverine is anything to judge by, the good has gone.

Perhaps in a failed attempt to distance themselves from X-Men 3 and heal some of the mangling inflicted on the franchise by Brett Ratner, Fox has backed the mutant truck up to a more innocent time, before Charles Xavier had started his School for Gifted Youngsters, in search of how the X-Team's most popular rabble rouser got his start. X-Men Origins: Wolverine opens in the early 1800s, when a young James Howlett first discovers his bone claws and has his first moment of looking into the air, arms splayed, and screaming "Noooooooooo!" He will get to do it at least twice more before Wolverine is through, once after a nightmare and again after another tragic event (and that one even gets its own flashback; you know a movie is hurting in the story department when every twenty minutes they have to remind you what happened twenty minutes ago). Little James runs with little Victor, away from their broken home and into the history books, fighting in the next four major wars side by side, their mutant healing factor preventing them from ever dying. Never mind how they kept getting assigned to the same unit. Compared to other sins of logic you will soon endure, that indiscretion is minor at best. (They are also Canadian, but I guess no one checked their papers when they joined the U.S. Army.)

Following an incident of rage-induced fragging in Vietnam, the two grown boys, who have turned into the handsome and feral comedy duo of Hugh Jackman and Liev Schreiber, get recruited by William Stryker (Danny Huston) for a crack team of international problem solvers. Consider them like a superpowered A-Team, with the Wolverine-to-be as Mr. T, complete with his fear of flying (no, I am not joking). Wolverine pities the fool who would do the bad things that Stryker demands, and he's out of there. He'll see you suckers later. Sayonara!

Only, as old buddy Victor, the man who would be Sabretooth, warns him, you don't just walk away. Nobody does. Six years later, Sabretooth is killing off the other members of the team, and he plans to get his revenge on James--now called Logan, a fact every other character has picked up by osmosis. Sabretooth begins by killing his lady friend (Lynn Collins), which sends the sniveling Wolverine running back into the arms of Stryker. The bad Army man offers Logan a chance at something special: an adamantium skeleton that will make him indestructible. But uh-oh, didn't you smell that double-cross? Dammit, Hannibal would never do this to B.A. Baracus! 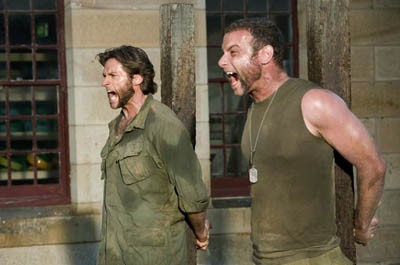 It's hard to begin detailing what is wrong with X-Men Origins: Wolverine, because the truth is, it's just about everything. In fact, let me go with a cliché and say it's easier to list what is right: Hugh Jackman, Liev Schreiber, and shockingly enough, Ryan Reynolds as Deadpool, a character who is a favorite of many an overgrown fanboy, but one I have no real history with. Be forewarned, though, if you like Deadpool, you may end up pretty pissed about what they do with him. Writers David Benioff (The Kite Runner--what!?) and Skip Woods (Swordfish) not only destroy the character, but they do so in such a ridiculous and stupid manner, that it tops the cumulative effect of all the ridiculous and stupid that has preceded it up until that point--and we'd already climbed Stupid Everest.

I don't expect genius here. I'd have been satisfied had Wolverine just been fun. Even early on, when the story appeared to lack all hope, I thought I'd at least get through it on the action. The first couple of battle sequences, including the cool looking duel between Wolverine and a helicopter that they sample in the trailers, are fairly entertaining. The effects aren't so great--apparently, having a guy walk in front of an explosion is the most difficult movie illusion to pull off ever--but what the hell, it's fun, and Jackman's growls and sneers are always charming. Schreiber, likewise, makes a great villain, a dark and macho foil to Jackman's brooder. By the next big fight, however, any good faith the other scenes had inspired in me had gone. Clearly, the filmmakers had stopped worrying about what made sense at that point and surrendered in full to the digital age: now that we can use computers to make Hugh Jackman do whatever we want, let's just do it. Coulda trumps shoulda!

X-Men Origins: Wolverine is directed by Gavin Hood, whose film Tsotsi won the Best Foreign Language Oscar in 2006. His next film, Rendition, is better known for having introduced Reese Witherspoon and Jake Gyllenhaal than it is for being a film, and maybe it was the failure of that noble piece of flawed filmmaking that forced him to take a money gig he is not at all suited for. He clearly doesn't respect the material, though neither does anyone else associated with initiating this stinker. The first theatrical release I reviewed for DVD Talk back in 2006 was X-Men: The Last Stand, and in that review I noted how quite often the term "comic book storytelling" was used as a pejorative to describe sloppy narrative devices that defied all reason. I argued that this was false, that it really refers to what snobs and Hollywood nimrods have decided comic books are like, but in reality, no comic book writer with an ounce of dignity would do some of the stupid things done in X3. I stand by that assertion, and I say it goes triple for Wolverine. It's one lame contrivance, one easy twist after another, capped by Wolverine causing Three Mile Island. (What next? Colossus was behind Chernobyl?) This movie can't even stick to its own rules. If you say in one scene that a silver bullet will kill a werewolf, you can't say it's only temporary half-an-hour later--but that's what Wolverine quite literally does.

Listen, brass tacks, I know fans of the character are still going to want to see this. Such is the price of fandom and the abuse we must often suffer. I will give it some credit for not being so bad it's painful, and if you give yourself a license to laugh at it, you will get through it. It's going to make you angry, but you can do it. The film is made up of a string of clichés you've seen a million times before--including not one, but two "don't do it, you'll be just as bad as him" moments--so the bitter flavor is not a poison that will kill you. Still, I urge you to consider breaking the cycle of abuse. Tell these folks that just because you love something, you don't have to put up with them ruining it. They think you'll keep paying for their blunders forever.

And I guess I should also take a deep breath and not write off the summer of 2009 already; last year, second out of the gate was Speed Racer, and if Hollywood could get up again after slipping on that turd, they can bounce back from X-Men Origins: Wolverine, too. Otherwise, it's going to be a long haul to Oscar season.