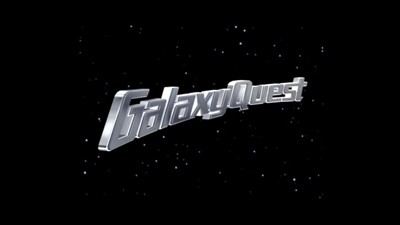 
The Movie
It still surprises me that almost 10 years after it hit theaters, earning a respectable take at the box office, that a real cult following hasn't grown around Galaxy Quest. Sure you can find a good amount of people who know about it (a sure sign of cinematic taste and a way to determine friendship worthiness) but it remains as underrated and under-appreciated as ever. Is it because star Tim Allen gives it the air of a kiddie movie? Is it bias against any sci-fi without the word Star in the title? Is it the PG rating? Whatever it is, people are missing out on something great, a situation they can now correct with this Deluxe Edition DVD.

The story is an absolutely brilliant take on the concept of popular culture: What if a race of aliens came across one of our television shows, say, Star Trek, and decided it was a form of recorded history instead of entertainment, and based their whole culture on it? Well, in this case, the Thermians, a naive peace-loving alien race, rebuilt their society based on the ideals and technology of the long-canceled TV show Galaxy Quest, a thinly-disguised version of Gene Roddenberry's baby, and now, at a critical juncture, they need help from their inspiration, not knowing the stars of the show are merely actors, not noble adventurers. So you have people who live their lives based on a TV show, turning to the people they watch on TV to lead them in real life. If that's not relevant today, what exactly is?

There are a lot of layers to enjoy in this well-rounded film, from the chance for redemption for the actors, whose greatest success is far in their past, to the dangers of idolizing people you really don't really know, to the power and joy of believing in something good. While the very damaged actors at the core of the film are fun to watch live their very inner-focused lives and try to rise to others' expectations of them, the story of the Thermians is touching and engaging, as they are simple creatures seeing success in others and attempting to replicate it in their own lives. There's even a story for the fanboys mixed in, as young Brandon, a Questerian of the highest degree, lives his life around Galaxy Quest, only to have his devotion pay off in a big way.

All of these ideas are fine, but without the right people in these roles, you couldn't believe or care about them. The cast here though is loaded with comedic genius, from the stars down to even third-tier roles. Allen is perfect as a blowhard former star living off his past, never dipping into what could have been an easy imitation of Shatner, while Rickman breathes real life into a character that could have been just the stereotype of a fussy actor. While Weaver, as the show's sex symbol, who's unsatisfied with her role, holds a bit of a secondary role to the leads, her comedic chops are on full display (along with other assets.)

The rest of cast is just loaded with top-notch comedic actors, including the great Enrico Colantoni, Jed Rees, Patrick Breen and Missi Pyle as Thermians and the perfectly deadpan Tony Shaloub, hilarious Daryl Mitchell and the wonderful Sam Rockwell on the crew. Rockwell, in particular, steals just about every scene he's in (which should be no surprise to anyone familiar with his work), with the line, "Can you form some sort of rudimentary lathe?" forever burned into my brain. The movie also served as the film debuts for Justin Long and Rainn Wilson, further illustrating how good the casting was in this film.

The quality casting is aided by a script that is chock-full of hilariously quotable lines, all of which fit seamlessly with the storyline, leanding a realism to this sci-fi comedy that's necessary to make it a great film. You can laugh out loud as Rockwell pulls off another brilliant one-liner, only to be smacked with emotion as Colantoni's alien leader sees the ideals he built his life around get smashed before him. The believability is only enhanced by design and special effects work that is simply great, including fantastic sets and space vistas, some excellent CG animation and impressive animatronics and make-up (though the main baddie felt a bit too Ninja Turtles rubber suit for me.) Considering we are talking about a film 10 years old, that it holds up so well is a definite plus.

On a side note, imagine if the creators could have made the film about the actual Star Trek, with the actual cast playing themselves? With William Shatner's knack for self-parody, it could have made for a meta sci-fi film on par with Being John Malkovich. That doesn't take away from the brilliance of Galaxy Quest, but a boy can dream, can't he? 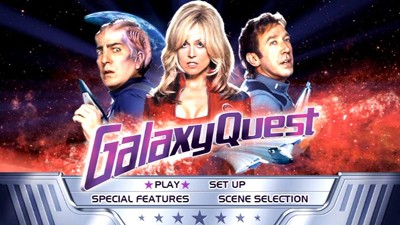 The DVD
A one-disc release, this DVD is packed in a standard keepcase, which is inside a slipcover with an impressive 3D lenticular animation of the cover art. The disc features a static, anamorphic widescreen menu with options to play the film, select scenes, adjust languages and check out the extras. Audio options include Dolby Digital 5.1 English and Spanish tracks and a Dolby Digital 2.0 Thermian track (see The Extras), with subtitles in English, Franch and Spanish, along with closed captioning.

The Quality
The packaging indicates the anamorphic widescreen transfer has been digitally remastered, and looking at them side-by-side, it's definitely not the same, with the most obvious change being an image that's slightly wider and which shows more image from top to bottom and side to side, making the framing feel more appropriate (for instance, one scene now shows the screen the characters are looking at, whereas before they were simply looking offscreen.) The color saturation is a touch muted n this new disc, which makes scenes like the rock monster battle feel more natural (reds burned hot on the old disc,) while the level of detail has gotten a bump up, while thankfully not making the CG special effects look bad.

Disappointingly, the DTS track that was available on a separate DVD in 2000 is not included here, but the audio, presented in Dolby Digital 5.1, fits the film excellently, keeping things low-key and focused in the center channel when on Earth, before filling the surrounds with bold, dynamic sound effects and a sweeping, epic score by David Newman. There's not a lot of the aural acrobatics you hear in space action flicks, but there are some impressive touches.

The Extras
The first release, from back in 2000, had a decent selection of extras for the time, with several extras that didn't make it to this DVD, including a 10-minute featurette on the making of the film, cast and crew bios (with interview clips), production notes and, sadly, the DVD version of the Omega 13. (also missing are the great animated menus.) Fortunately, what they've been replaced with is much better.

Up first is a "Historical Documents: The Story of Galaxy Quest," an 18-minute retrospective featurette about the making of the film and how those involved feel about the film almost a decade later. There are some interesting bits of info about the origin film shared, including notes about the movie's original concept, but the thing that's most interesting about the piece, and the other featurettes on this disc, is the participation of those involved. It probably says something about how they feel about Galaxy Quest when you see that they got interviews with Allen, Rickman, Weaver, Shaloub, Rockwell, Mitchell, Colantoni, Pyle and Long, as well as director Dean Parisot, producer Mark Johnson and writers David Howard and Bob Gordon. It's just what a fan of the film would hope for in a look back.

Considering how terrific the casting was on this film, it makes sense that there's a tighter focus on the characters and the actors who play them in "Never Give Up, Never Surrender: The Intrepid Crew of the NSEA Protector" (23:21). There's not a touch of fluff here, as you get real insight on the cast and their roles, thanks to them talking mostly about each other rather than their own experiences. The conversations are so genuine and heartfelt that you can't help but smile watching them, especially when Colantoni talks about how Shaloub found his character. I was laughing so hard I almost cried. The new interviews are supplemented with clips from 1999 sit-downs, adding some retro-perspective.

In "By Grabthar's Hammer, What Amazing Effects," seven minutes are devoted to the film's special effects, provided by Stan Winston and Industrial Light and Magic. What's nice about this piece is, not only do they talk about the excellent alien work, but the effort to make the cheesy old show look authentic. The only downside is the lack of new interview material, as many of the clips, including, of course, the late Mr. Winston, are from 1999.

The 5:22 "Alien School: Creating the Thermian Race" talks about, naturally, developing the good aliens in the film, divulging how much influence Colantoni had on the Thermian concept, and how the actors helped sculpt this race on the set. This featurette, along with "Never Give Up, Never Surrender" and the following six-minute "Actors in Space" point out just how much this film is an actor's film. "Actors in Space" which may celebrate acting a bit too much, talks about the idea of the movie being about acting than much as anything else, with interviews with the cast, naturally.

With all this great film-focused content, it's time for a bit of a tangent, which comes in the form of the two-minute "Sigourney Weaver Raps." A rap music video Weaver did for her agent while on the set, with help from Mitchell, Rockwell, Pyle and Breen, is so incredibly embarrassing that we are lucky to have it to enjoy on DVD. Really, the title is all you have to say to get the idea, but hearing Rockwell spit rhymes and seeing Pyle dance like a loon doesn't hurt either.

Back from the previous disc are the seven deleted scenes (with an added introductory clips from Allen and Rickman) and an eighth alternate edit of a scene in the film, with an intro from Parisot and Gordon. There's some fun stuff in here, especially a scene showing Rickman's character's room on the ship and Weaver using her sex appeal against the bad guys. Also carried over is the biggest extra, and unfortunately, the least entertaining, as there's a feature-length audio track in Thermian, the language spoken by the aliens in the film. As a concept, it's great, but in practice it's a massive case of overkill, as listening to a movie in a made-up alien language just doesn't offer anything beyond the initial novelty. Now, if, after 10 or so minutes, it segued into a commentary, it would have been a great gag and welcome extra.

Things wrap up with the theatrical trailer for Galaxy Quest (which couldn't have helped perceptions of the film) and a trio of Star Trek previews.

The Bottom Line
A wonderfully talented cast, a great concept and fantastic writing make Galaxy Quest an underrated sci-fi/comedy classic that's based in the genre's conventions, while twisting them into something original every step of the way. The DVD offers up a slightly improved image, (though sadly doesn't include the previously available DTS track), while adding an impressively entertaining slate of new extras, making it not too tough to recommend as an upgrade, but a must-have for anyone who's held off so far.