Sony Pictures // R // April 21, 2009
List Price: $24.96 [Buy now and save at Amazon]
Review by Stuart Galbraith IV | posted May 3, 2009 | E-mail the Author
In an interesting marketing move, Sony Pictures Home Entertainment has repackaged director Peter Bogdanovich's superb (if previously-released to DVD) The Last Picture Show (1971) as a kind of second-feature, supporting one-half of a two-disc "director's choice" double-bill noteworthy for its main attraction: Nickelodeon (1976), a lesser movie, but one heretofore long unavailable on Region 1 DVD.

More intriguingly, Nickelodeon comes in both its original 122-minute theatrical version, released in color, and in a new 125-minute black & white cut, one preferred by the director. (The Last Picture Show is also in its 126-minute "director's cut," which has been the definitive version of that film for 15-plus years now.) Even if you already own the 1999 DVD of The Last Picture Show, this edition includes some apparently new extras: an audio commentary and on-camera discussion about the film featuring Bogdanovich. 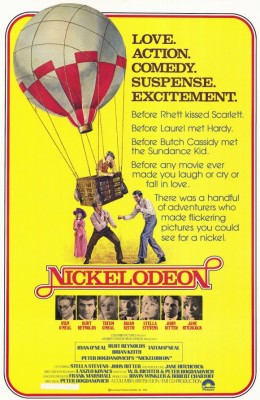 Nickelodeon is the kind of movie you really, really want to like. It tries hard to please and is fitfully charming. It offers many fine performances and nice little moments - but for some reason it just never really comes together in a cohesive, sustaining way. The first third of the film is weak but things steadily improve as it goes along; initially very disappointed and bored, I was surprised that by the end it had won me back (for the most part), and found Nickelodeon's final scenes unexpectedly quite touching.

The picture covers the tumultuous era of movie-making between about 1910 and 1915, when quickly-produced one-reel shorts projected in dingy nickelodeons (often converted pool halls and the like) with tinny piano accompaniment gave way to ambitious feature-length productions exhibited in glamorous early movie palaces with full orchestras. It was the height of the "patent" wars, when a trust formed by the leading film companies ruthlessly fought foreign and independent filmmakers for control of the industry.

The film follows attorney-turned-film scenarist and director Leo Harrigan (Ryan O'Neal) who joins a rag-tag production unit owned by H.H. Cobb (Brian Keith, who seems to be channeling James Cagney, an odd sight indeed). Initially based in Chicago, the unit moves west to Cucamonga, California, where Buck Greenway (Burt Reynolds), an uneducated, uncultured man sent by the Motion Picture Patents Company to sabotage their efforts and destroy their film and equipment, instead becomes their leading man. Meanwhile, both Harrigan and Greenway are after the same girl - a clumsy, near-sighted dancer, Kathleen Cooke (Jane Hitchcock, in a role envisioned for Cybill Shepherd), who becomes both their leading lady.

The DVD's cover text describes Nickelodeon as a "heartfelt valentine to the early days of moviemaking," and it's this aspect of the picture that works best. (The film is similar to the interesting but also flawed British series Flickers.) Reportedly, most of the film's incidents were adapted from real-life personal anecdotes of directors Allan Dwan and Raoul Walsh (who receive special thanks during the end credits), but the screenplay by Bogdanovich and W.D. Richter's (Slither, the 1978 Invasion of the Body Snatchers) also wants to incorporate a lot of silent-era style slapstick and '30s screwball comedy elements.

The film was made after Bogdanovich stumbled with two consecutive flops, Daisy Miller (1974) and At Long Last Love (1975), so it's neither surprising nor unreasonable that he'd retrench somewhat with material that at various times recall What's Up, Doc? and Paper Moon (both 1973). If Ryan's character in the former aped Cary Grant's nerdy archeologist from Bringing Up Baby then here Ryan's has the look (glasses, straw hat, bow tie) of silent clown Harold Lloyd, but the two characters - Ryan in What's Up, Doc? and Nickelodeon - are very similar. Likewise, the actor's 13-year-old daughter, Tatum O'Neal, all but reprises her wily, deadpan character from Paper Moon. And so on.

A lot of the material is fine for what it is; the slapstick gags are well-executed, the underrated O'Neal is great at delivering long passages of meandering dialogue, and Reynolds is good as the dumb cowboy whom O'Neal's director constantly subjects to dangerous stunts. (He's more enjoyable in this than in the cocky, sardonic Good Ol' Boy persona that would soon propel him to super-stardom.) Indeed the whole cast is quite good, especially Stella Stevens and John Ritter as long-suffering members of Harrigan's stock company. (This is one of Ritter's few major film roles; Bogdanovich had wanted to cast him and Jeff Bridges instead of O'Neal and Reynolds.)

There are many funny if isolated moments: Reynolds' character suddenly being drafted to ride a horse onstage, on a speeding treadmill in full KKK regalia; the filming of a wedding scene, interrupted by the sudden appearance of an ostrich named Randolph; a funny sequence where the troupe breaks into the Hollywood studios that had recently fired them. And yet, for some reason, it just never quite comes together.

And yet there's a kind of payoff to the film that makes it a worthwhile experience. The best scenes are at the end, (spoilers) when everyone goes to the Hollywood premiere of The Clansman, D.W. Griffith's silent film masterpiece soon to be rechristened The Birth of a Nation. Though these last scenes might have fallen flat with disinterested non-film buffs, Bogdanovich shows long enough passages from the real Birth of a Nation to illustrate its huge impact on 1915 audiences, and how greatly it contrasted everything that had come before. That its release marked a major turning point in cinema history is not lost on its audience, or the audience watching the audience watching Griffith's film. Driving home, the troupe questions their own efforts until they pass a glass-enclosed, greenhouse-like studio shooting a WWI drama. It's beautifully done and too bad that the entire film isn't as evocative of its era as those last scenes.

Though László Kovács's color cinematography is actually quite pleasing to the eyes compared to many mid-'70s features Bogdanovich is right - in black and white, the characters and incidents are more closely, visually tied to the early silent era, and the unreality of much of the film in color is more believable somehow in monochrome. The black and white version is also three minutes longer than the color version, but I'm not sure what exactly has been added. (*** 1/2) 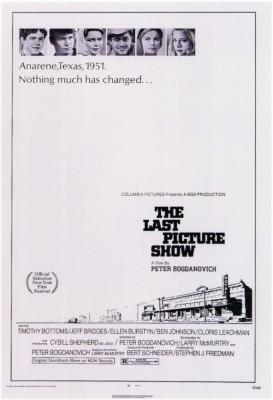 Based on Larry McMurtry's semi-autobiographical novel, The Last Picture Show is one of the great American movies of the 1970s or any other decade for that matter. It's a melancholy but starkly perceptive drama about the lonely, bored, sometimes ambitious, sometimes self-destructive residents of a small town in rural Texas. The film's main characters are sensitive high school senior Sonny (Timothy Bottoms) and best friend Duane (Jeff Bridges), something of a dumb jock. Most of the film follows Sonny as he becomes involved with an older, extremely unhappy married woman, Ruth (Cloris Leachman), the wife of the high school basketball team; while Duane has his problems with his shallow girlfriend Jacy (Cybill Shepherd), who's more interested in using her good looks to climb the town's modest social ladder and explore her sexuality.

Filmed by Robert Surtees in black and white, which accentuates the harsh landscape and wind-scrubbed faces, The Last Picture Show is a devastating, emotionally revealing film with a lot of tragedy but also a lot of insight about human relationships. It's amazing to consider that Bogdanovich (and close collaborator Polly Platt, his wife at the time) were only in the early-30s when they made this; it has the kind of unflinching honesty and probing one usually associates with a veteran director several decades into a long career.

Indeed, though Bridges, Shepherd, and especially the underrated, sad-eyed Bottoms are all terrific in star-making performances, it's the older actors who make the biggest impression, particularly Leachman's unflattering, authentic Ruth, a role she plays with a minimum of dialogue but enormous expression. Ellen Burstyn and Eileen Brennan are likewise excellent in supporting parts. But the film's soul is Sam (Ben Johnson), who owns the local pool hall and movie theater, who is a father figure to Sonny.

A former rodeo star and real-life cowboy, Johnson had been kicking around Hollywood for nearly 30 years before director John Ford badgered him into accepting Bogdanovich's offer. He had starred in a few pictures (Mighty Joe Young, Wagon Master) but mostly he was on the sidelines of dozens of great Westerns; usually he'd have no more than 10 or 15 lines in the whole picture. He wasn't really an actor so much as a cowboy who could act. If he was limited to certain kinds of roles within that range no one was more authentic. As Bogdanovich had anticipated, Johnson won an Oscar for his role in the film, and he enjoyed major supporting roles in films until his death in 1996.

Both films are presented in their original 1.85:1 aspect ratios, in excellent 16:9 transfers. Nickelodeon is a single-sided, dual-layered disc, and despite cramming both versions of the film and other extras onto one side, the film doesn't seem to suffer at all. Happily, Nickelodeon's director's cut looks like a black and white movie - not a color movie with the color turned off.

Both films are closed captioned with strong Dolby Digital mono tracks. The Last Picture Show has English and French audio and optional subtitles in those languages, as does the director's cut of Nickelodeon. (The theatrical cut has optional English subtitles only.)

On both the director's cut of Nickelodeon (but not the theatrical version) and The Last Picture Show, director Bogdanovich provides an informative, refreshingly honest, and always interesting audio commentary.

The previously released but excellent 64-minute (and 4:3) The Last Picture Show - A Look Back, directed by Laurent Bouzereau, covers that film at length, with lots of cast/crew interviews. It's supplemented here by a newer 12-minute Discussion with Filmmaker Peter Bogdanovich, in 16:9 format. An original and re-release trailer round out the package.

One has to wonder whether Sony would have ever released Nickelodeon to DVD in Region 1 had someone there not come up with the bright idea of pairing it with the acclaimed and established Last Picture Show. In any case, this is a welcome set, whether you're new to Bogdanovich's 1971 masterpiece or his fascinating if flawed 1976 disappointment, a film many in the U.S. and Canada have wanted to see for a long time. A DVD Talk Collector Series title.