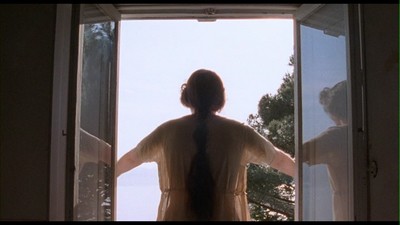 Of course, the obvious snarky question is why Enchanted April didn't come out on DVD until May, and I'd say the snarky answer would involve something to the effect that it felt like the 93-minute movie took a month to watch, so being a month late would just be par for the course.

Truth is, Enchanted April fans have waited much longer than that for the movie to come to disc in North America. Despite having won two Golden Globes in 1993 and getting nominated for multiple Oscars, this Mike Newell-helmed picture has not been on DVD before now. When I worked at a video store a couple of years ago, it was one of the most regularly requested titles amongst the customers. Perhaps this delay has built up too much expectation in me, given me too long to inflate my perceived appreciation of Enchanted April in my mind. I know I saw it during its theatrical run, and then at least once more on home video a couple of years later, but I'd wager it's been more than a decade since I last sat through it. The movie has gotten older, I've gotten older, and we've grown apart.

Enchanted April is a period piece set in the 1920s. It is the story of four British women and the Italian castle that provides them with a bucolic getaway for what is to be a month of no socializing, no husbands, nothing but the sea, the air, and the trees. The trip is initially organized by two bored housewives, Lottie Wilkins (Josie Lawrence), the wife of a gastronomically self-satisfied London-based solicitor (Alfred Molina), and Rose Arbuthnot (Miranda Richardson), who is married to a man (Jim Broadbent) who writes scandalous novels under an assumed name. To offset the costs of their holiday, the two advertise for vacation mates, eventually scoring a stuffy older woman (Joan Plowright) and a much-desired flapper (Polly Walker). As a little wrinkle of irony, the flapper, Lady Caroline, is trying to get out of town to escape the lecherous men who pursue her, and one of them is Mr. Arbuthnot. Uh-oh! Trouble's a-comin'!

Except, no, there will be no trouble. None at all. Rather, there will just be a month of relaxation and rehabilitation in the country, a month of quietly rediscovering oneself, and eventually of rekindling love. It's also a month of sheer boredom, a slow burn that never catches flame. 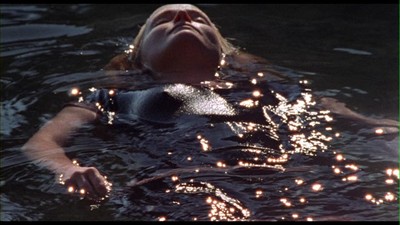 Enchanted April, even back when it seemed good, always came off as a bit of a sub-par take on Merchant Ivory territory. Written by Peter Barnes (the one-time much sharper writer of the satirically daring The Ruling Class) from a 1922 novel by Elizabeth von Arnim, the movie details the kind of humdrum, repressed lives that many a James Ivory character has so expertly burst in his many great movies, and given that Enchanted April originally hit the Cineplex somewhere in between Howard's End and Remains of the Day, it tied many of us over in terms of satisfying our yen for costume drama. Peter Barnes is no Ruth Prawer Jhabvala, however, and I doubt Ms. von Arnim is in the same league as Henry James. Likewise, Mike Newell is certainly no James Ivory; rather, he is the director of such middle-ground material as Mona Lisa Smile and Love in the Time of Cholera. His best-known movie (not counting his time at Hogwarts) is Four Weddings and a Funeral, another film that may not have aged well. After Enchanted April, I'm a little scared to find out.

It's not that Enchanted April is simply god-awful. It has some truly lovely locations, and I rather appreciated its use of multiple points-of-view, giving each lady her own voiceover in order to chronicle her inner thoughts. Polly Walker is as alluring as her part demands, affecting ennui and managing to be irresistibly attractive while doing so, and Miranda Richardson gives a subtle and nuanced performance that brings far more to the material than the filmmakers could have possibly hoped for. Looking out at the sea, pondering her life, she says more with her face than any of Barnes' dry narration ever could. The actress was really the only thing that kept me watching to the closing credits.

The problem is that Enchanted April takes its dispassionate stance far too seriously. The women are all supposed to change, transformed by their new surroundings, their blood once again boiled by the shining Italian sun--and yet, even as they change, the movie remains bloodless. Lots of light, but no heat and so no boiling. I didn't find the changes to be believable, instead they just came off as predictable, relying on audience expectation that the metamorphoses must happen rather than making the effort to inspire similar feelings within everyone watching. This is Merchant Ivory by the numbers, a costume drama going through the motions. The end result is that Enchanted April turns into a dreary pit stop rather than a life-changing experience. Rather than being the good thing we were waiting for to transport us to a better place and time, it's just more impetus to keep looking. 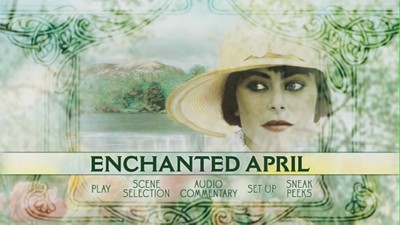 Video:
Miramax has done an incredibly lazy job with the 1.85:1 anamorphic transfer of Enchanted April. The overall picture quality is dark and grainy, something you might expect from a 1980s BBC TV production rather than a prestigious indie picture--which I guess makes sense since this was originally shot for television. Still, it's clear there was more that could have been done to prep the film for DVD. There are frequent snaps, crackles, and pops on the image, as well as some digital combing that creates soft edges. The dark scenes are hazy, the colorful scenes muted, it's pretty poor work for a movie that many have been yearning for.

Sound:
I found the 5.1 Dolby Surround Mix to be better than the video transfer, but there were still muted elements to it, as well. Though there are occasionally good speaker interplay employed on the sound effects, creating a semblance of natural atmosphere, overall, it's a very low-key audio treatment. Which is fine, but the dialogue sounded of insufficient volume to my ears.

There are two English subtitle tracks: a Closed Captioning option and a second option that incorporates the audio commentary into the dialogue.

Extras:
Listening to the audio commentary by director Mike Newell and producer Ann Scott, it's hard to tell if they were more bored than I was watching Enchanted April or if the absence of any driving personality in even this is enough to indicate where it all went wrong. You could make a whole other movie in the gaps in their conversation, with the talking only starting up again when Newell decides to pat himself on the back for something. Though there is some insight given and the occasional explanation or production anecdote, much of the commentary is just Newell asking Scott, "Do you remember this?" and Scott answering, "Yes, I do."

A handful of Miramax trailers play before the menu loading and then can be selected again from the menu itself.

FINAL THOUGHTS:
I'm tempted to tell folks to pass on this dud altogether, but Miranda Richardson is so good in Enchanted April, I'm willing to suggest you Rent It. Though an indie darling and a Merchant Ivory stand-in back in the 1990s, it's hard to see what spell this cheerless British drama cast on audiences and awards committees back in the day. As a former fan, I can't tell how I was ever bewitched. The story of four women in the 1920s fleeing London for four weeks in the Italian countryside is meant to be a picture about rediscovering life's passions, but truth is, by the end, the filmmakers find very little at all. The DVD seems to reflect this lack of excitement, giving a dismal movie an equally dismal digital video transfer. Oh, Miranda Richardson, you really do deserve better! 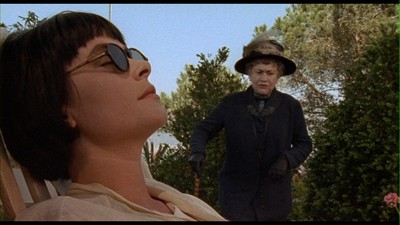