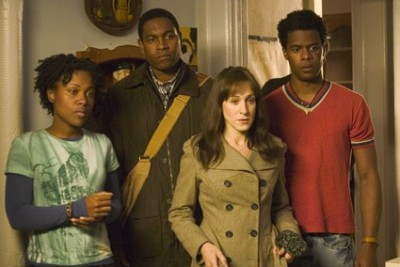 Adapted from the celebrated 1999 play by Rebecca Gilman, "Spinning Into Butter" makes a disastrous transition to film, aiming to salvage pertinent points on the witch's brew of racism through a filmmaking undertaking perhaps best described as "total clown shoes." Well intentioned, but exhaustively moronic, "Butter" labors to find a point of view that will satisfy its multiple cravings to act as both a high-wire dramatic excursion and as a finger-wagging spotlight on intolerance. "Butter" wants to heal the world, but all that benevolent energy would've been better served within a more nuanced approach to the hysterical source material.

Into her second year as the Dean of Students at a liberal-minded college in Vermont, Sarah Daniels (Sarah Jessica Parker) is troubled when she learns of various threats and racially charged notes aimed toward African-American student Simon Brick (Paul James). With college officials (Miranda Richardson, Beau Bridges, and James Rebhorn) up in arms and the diverse student body taking sides based on skin color, Sarah finds her only outlet of honest communication is found in the company of African-American reporter Aaron Carmichael (Mykelti Williamson). Struggling with her own secretive past of prejudice, Sarah hopes to encourage a peaceful summit of ideas and discussion on campus while everyone else appears more comforted by blind hysteria.

Unable to shake its stilted theatrical roots, "Butter" is reminiscent of an after school special concerning the corrosive effects of racism. It's stagey and one-dimensional, eager to escalate tension without any real understanding of the groundwork required to make the material ring true in front of a camera. Director Mark Brokaw simply trusts the original staging, never reassessing the screenplay (credited to Doug Atchison) for critical cinematic needs. It leaves a film chock full of unintentionally uproarious performances, cartoon depictions of racial divide (all the Caucasian characters seem one inventively worded Ku Klux Klan pamphlet away from a hood fitting), and a handful of subplots that are introduced (including an absurd flirtatious relationship between Sarah and Aaron) only to be promptly ignored.

The artificiality of "Butter" is way too much to swallow, leading to screwy scenes where overly yappy characters blurt out whatever bigoted thought is on their mind, forgoing the natural human reaction of self-censorship. In fact, there's not a single human being to be found in "Butter," just a series of militant collegiate clichés bumping around waiting for their cue to cry foul. The material suggests a compassionate thematic discussion of racial identity and overview of iffy college campus diversity standards, but it's all lost in the mix of monologuing characters that represent ill formed ideas instead of emotions. "Butter" is quick to shame, but it never quite confronts the spectrum of hot potato issues it raises.

And what's up with Vermont? "Butter" takes place in the placid state and spends a disturbing amount of time trashing its allegedly colorless populace. While Caucasian frustration is a focal point of the "Butter" experience, it's often lobbed at Vermont as a whole; the state is imagined as an intolerant home for students of color, while providing needed shelter to white folks living in fear of the black man. It's bizarre and mean-spirited, especially when the film treats Chicago as an oasis of culture and diversity. Did Vermont sleep with Gilman's significant other? Pick her last during kickball? I love Chicago as much as the next guy, but I've never known the city to be a juicy valentine to humanity's finest melting pot achievements. Come on Vermont, stand up for yourself!

DVD Talk was provided with a DVD-R screener copy of "Spinning Into Butter" for review. Final A/V quality wasn't available for examination.

Racism is a social plague that cannot be snuffed out with softball offerings of enlightenment. "Spinning Into Butter" (the title comes from the story of "Little Black Sambo") is yearning to open a dialogue on matters of hatred and discrimination, but the case is rarely sold with conviction, culminating in a "twist" ending that should hold more power than Brokaw ultimately allows. The subject deserves a stronger deconstruction than this picture offers; a film that ultimately makes light of prejudice and hate through unbearable execution and unreasonable amounts of stupidity.