Paramount // R // May 5, 2009
List Price: $29.99 [Buy now and save at Amazon]
Review by Stuart Galbraith IV | posted May 6, 2009 | E-mail the Author
Saturday Night Fever (1977) is many things to many people. Its story of an uneducated, streetwise punk, "a nobody on his way to no place," who leaves his troubled existence for weekend nights in a cocoon-like discotheque, resonated with contemporary audiences. They embraced the euphoric escapism that disco - and its accompanying lifestyle - seemed to offer. Though based on a New York magazine article about Brooklyn teenagers that turns out to have been completely fabricated, in retrospect Saturday Night Fever has become a document of its era, a mostly authentic portrait of the Polyester Age in all its tacky glory and of a pre-gentrified Brooklyn and its local color. And for others still, Saturday Night Fever has attained a certain appeal as high camp; released near the apex of disco's meteoric rise, the genre and Saturday Night Fever would become a colossal joke within a few years, with the movie's key scenes parodied endlessly.

Paramount's Blu-ray is a stunner, presenting the film with the kind of clarity that has an almost time machine-like effect of transporting the viewer to that time and place. The disc is also packed with extras - some good, some gimmicky. Overall, however, this is a major release of one of the biggest films of its decade. 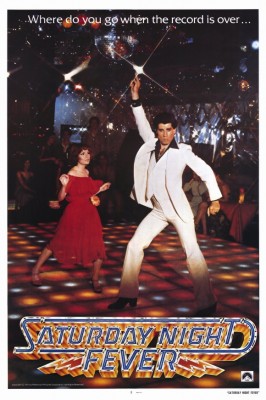 The film stars John Travolta - of course. He was just 22 when it was being made - barely three years older than his character is supposed to be - and his popularity at the time rested on a single hit, as Vinnie Barbarino on the TV sitcom Welcome Back, Kotter. In Saturday Night Fever, Travolta is Tony Manero, an Italian-American in Brooklyn, who still lives with his unemployed father (Val Bisoglio), pious mother (Julie Bovasso), grandmother and kid sister. His older brother, Frank Jr. (Martin Shakar), is the family's pride and joy since joining the priesthood, but when he gives up the collar, all hell breaks loose.

Tony works in a paint shop/hardware store but has little ambition. Instead, his life centers around his Friday and Saturday nights spent dancing and partying with his pals at 2001 Odyssey, the local, bustling disco, where Tony is the recognized king of the dance floor.

Outside of the club, Tony's problems mount. He falls for an attractive and talented dancer several years older, Stephanie (Karen Lynn Gorney), but she thinks he's a punk that'll only drag down her ambitions to wipe away her Brooklyn roots and move up and over to Manhattan. Another girl, Annette (Donna Pescow), loves Tony but he treats her like dirt and she becomes self-destructive as a result. At home, Tony's mother blames him for Frank Jr. leaving the priesthood while his father, unable to find work himself, criticizes Tony's dead-end existence. In a relationship clearly patterned after James Dean and Sal Mineo in Rebel without a Cause, another friend of Tony's, Bobby C. (Barry Miller), turns to Tony for help after he gets a girl pregnant, but Tony's too distracted by everything else to pay him much attention.

What's most impressive watching Saturday Night Fever today is its realism and frankness off the dance floor, its honesty in depicting Tony and his pals as likeable lugs the audience roots for but who are also casual racists and misogynists who smoke packs of Marlboro Reds, drop speed and other drugs, and screw near-strangers in the back of Bobby's beat-up Chevy Impala - the kind of authentic tribal things people really did back then (and probably still do) that would never turn up in a mainstream American movie or television show today. It's especially hard to imagine a big star agreeing to read dialogue that fits right in with his character but which must have seemed foolish even then, e.g., Tony's way of saying good-night to his pals: "Dream good, jerk-off better!"

It's ironic that two of the more authentic urban movies of the '70s, Saturday Night Fever and Rocky (1976), with lead actors in each of those films (Travolta and Stallone) so justly praised for the authenticity of their performances, would spawn so many crappy sequels and imitators, and that each actor would become a high-concept megastar in roles that rarely have even attempted to recapture that striking verisimilitude.

Indeed, Tony Manero is a fascinating character partly because he's such an uneducated, uncultured dope whose two advantages over his pals are his dancing ability and a modicum of self-awareness. We forgive his sexism and racial slurs because we recognize him as an immature, unformed adult trying to figure out who he is and what he has some chance of becoming - which is also the root of Saturday Night Fever's broad, almost universal appeal. Travolta fits this character like a glove - he's attractive and dopey-looking at once, by '70s standards something like Hot Shit, but in the film he also resembles a gussied-up baboon.

The movie benefits from an almost classical script rich in characterizations. I was impressed by how in the movie tells us so much about Tony in just the first two minutes. Before the end of the first reel the audience learns Tony: likes to chase women, is a kind and thoughtful brother, is trusting and kind-hearted to strangers, thinks fast on his feet, and is popular in his neighborhood. The posters in his bedroom say it all - on the walls are Bruce Lee, Farrah-Fawcett, Rocky, and Al Pacino (as Serpico).

Director John Badham is good with this kind of material while maximizing the disco scenes and conveying that euphoria so well.

Filmed in 1.85:1 spherical Panavision, Saturday Night Fever comes from an era of incredibly grainy release prints with muted color, so seeing the film look this good in high-def - better certainly than most original release prints - is almost a revelation. The image is impressively sharp and even during scenes which soften the image with filters (a la Superman, made at around the same time) the 1080p stays strong. I was especially impressed by the subtle and varied color in the discotheque scenes, which handle the emphasis on reds extremely well, and by the night-for-night location scenes, which have black blacks and keep the level of resolution high without getting grainy as most mid-'70s films tended toward.

An early "Dolby System" release (it's not clear to me if, originally, this was a mono release or true Dolby stereo), the Blu-ray offers a 5.1 Dolby TrueHD mix that, not surprisingly, benefits the music a lot but the dialogue and sound effects tracks only somewhat. This isn't a criticism really, as I'd rather hear a mix that enhances the original audio rather than artificially boost it. A 5.1 Dolby Digital French track and a Spanish mono one are also included, along with subtitles in all those languages plus Portuguese.

The disc is packed with supplements; Paramount obviously knew this would be a big-seller and spent a lot of money on the VAM (value-added material) but it's also geared more for the mainstream viewer than the film buff. This is obviously so in some of the more gimmicky extras, which include a Dance Like John Travolta with John Cassese dance lesson; a Fever Challenge which isn't the expected trivia game but a dance-step follow-the-colored-lights game; and a '70s Discopedia pop-up feature that explains the era's jargon and other iconography to those too young to remember it.

Catching the Fever is the highlight among the extras, a 52-minute making-of/retrospective feature broken down into five sub-sections. These sub-sections are sometimes limiting, focusing attention away from the film to discuss Disco-mania for instance, but it has the advantage of onscreen interviews with almost all of the key creative people and the main cast members - with the single notable exception of John Travolta himself. It's particularly fun to see the cast today, 30 years later, all middle-aged men and women with some interesting insights about the film and its production.

One of the cast members, Joseph Cali, is featured in Back to Bay Ridge a terrific then-and-now featurette sure to please fans of the film. All of the aforementioned supplements are in high-def. A commentary by director John Badham is also included, as are three deleted scenes, all in 16:9 standard-def.

It's too bad hard-core Fever fan Gene Siskel didn't live long enough to record a commentary track. About the only other thing missing I'd have liked to have seen are excerpts from the cut/reworked PG version, a release designed to reach a wider audience than the R-rated cut would allow.

It's hard to say whether first-time viewers in 2009 will respond to Saturday Night Fever as audiences did in 1977, the same summer when another little movie called Star Wars was making a similar pop cultural tidal wave of its own. But at the very least the film in retrospect captures its era better than just about any American movie released that year, and the Blu-ray transfer couldn't be better. Highly Recommended.