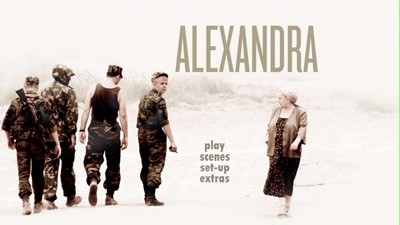 It's hard to classify a film like Alexandra, the most recent effort from Russian writer/director Alexander Sokurov. Most famous for his astonishing Russian Ark, the first full-length feature to be done as one continuous shot, Sokurov is often compared to Bergman and Tarkovsky, and rightly so. His movies are deep, challenging works, singular in vision, never compromising.

A summary of Alexandra is almost useless, as the film is less about story and more about marking the emotional footprints of its characters. The essential "plot," as it were, is about a Russian grandmother (Galina Vishnevskaya) visiting her grandson Denis (Vasily Shevtsov), a sergeant in the Russian army. He's stationed at a remote Chechen outpost, and from the moment Alexandra arrives, she is out of place. The army base is barren and secluded, a closed system with its own code and structure. This visitor creates an immediate juxtaposition between the outside and the inside, and Sokurov patiently tracks the old woman as she explores the camp, talking to soldiers, and even going beyond its perimeter to the local market, where she befriends some of the occupied people.

It's somewhat of a conventional story, but Sokurov does not chronicle it in a conventional way. Rather, he favors a languid pace and avoids any identifiable narrative structure. Alexandra is put together more like a series of vignettes, following Alexandra's chain of discovery. Wind her up, point her in a direction, and see what she finds. There are echoes of Samuel Beckett in how it comes together, and particularly in how Sokurov shows the soldiers' lives. They are like part of a great machine, one that lumbers on without much reason or purpose. Most of the men appear in stasis, merely waiting for something to happen. Within that are pockets of private activity, the troops pairing off, speaking in whispers. Are they suspicious of the old woman, or would she simply just not understand? 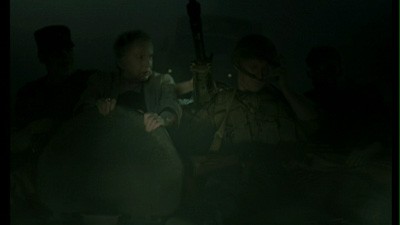 In her wanderings, Alexandra observes everything. She watches her grandson's squad clean their guns, and she climbs into a tank and handles a rifle herself. She questions soldiers of all ranks as to what they do and why, and she defies their instructions of how she should behave or where to go in equal measure. At the Chechen market, she meets young men who are angry and others who are kind but weary of the Russian presence. She also meets and befriends another old woman (Raisa Gichaeva), and they share a certain sisterhood, knowing all of these troubles are the troubles of men. Metaphorically speaking, could Alexandra be Mother Russia herself and her friend Chechnya?

What makes Alexandra interesting is how little judgment she displays and how practical her assessment of everything is, no matter how seemingly complicated the scenario. Beyond certain common sense reactions ("What? You haven't eaten?"), she is sympathetic to everyone, accepting of everything. Galina Vishnevskaya is an excellent performer, pulling off the dual qualities of being a blank-slate observer and an unrepentant reactor. On one hand, she understands the nature of violence; on the other hand, she understands why the Chechens would prefer to be left to their own business. In both cases, she lets what she sees and hears visibly touch her, even if she says nothing. Interestingly enough, Alexandra discovers that both sides fundamentally share the same human desire. Denis, her grandson, speaks of his yearning to be his own man, to be free from the past. It's the common bond he shares with the people he is meant to regulate. What follows this admission is a tender scene where Denis cares for his grandmother, embracing her and braiding her hair. The woman, who has spent most of the film easily winded, seeking rest, finally finds some peace after. Again, if we accept that maybe Alexandra is Russia itself, then one could surmise that Sokurov wants us to see how these less-than-peaceful distractions are causing what's important to be neglected.

To go along with that, the soldiers all seem to yearn for the motherly care that Alexandra represents, as well. They stare at her longingly, almost sexually. She is the only woman within the confines of the camp, and the only person concerned with how they are feeling or willing to scold them when they act petulantly.

Sokurov and his cinematographer, Aleksandr Burov, shoot the majority, if not all, of Alexandra using natural lighting. Thus, the look of the picture ranges from dark and shadowy to blown-out and sun-drenched. There is an immediacy to the shooting style, reminiscent of some of Soderbergh's work, that gives Alexandra the illusion of being impromptu, as if it were a documentary. It places the viewer in the here and now of the story. With the film being framed by the train ride to the base and then the train ride out, the illusion grows stronger: you came here with Alexandra, you walked around with her, and you left when she did, too.

The greatest strength of Alexandra, though, is how it affects each person watching it. There is very little commentary, the actual issues being touched on only briefly (I don't even think that Chechnya is named in the movie). When you're watching the movie, it's not always clear why Sokurov has invited you along for this vacation, the individual moments seem so incidental and often disconnected. What's important is the cumulative effect. Hitting stop on the DVD doesn't stop the movie from playing over in your brain, and as it does, the impressions Sokurov has made come into clearer focus. What might have initially appeared slight or meandering takes on solid form, and you realize how marvelous the full picture really is. 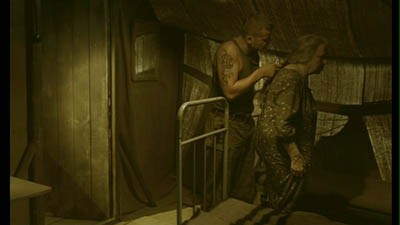 Video:
Alexandra was filmed at a 1.85:1 aspect ratio, and the DVD preserves that in a very nice anamorphic transfer. There was some evidence of interlacing, but overall, the picture quality is good, maintaining strong detail and capturing the various looks of the picture.

The bonus material is not transferred with as high a standard as the main film, so you will notice more fuzzy lines and combing.

Sound:
We get two mixes of the original Russian soundtrack, Dolby 5.1 and 2.0. Though not an overly effusive flick in terms of sound, Alexandra does have an immersive audio landscape, and subtle effects moving through the speakers add to the realism.

The optional English subtitles are well written and go by at a readable speed.

Extras:
Alexandra is a single-disc release packaged in a regular-sized plastic case. A paper insert comes with the disc, and it features an essay by film critic David Shengold.

In addition to the original theatrical trailer, the other film-specific bonus feature is an hour-long press conference given to the Russian press in support of Alexandra. Present to discuss the film are director Alexander Sokurov, star Galina Vishnevskaya, and producer Andrei Sigle, who also composed the music for Alexandra. 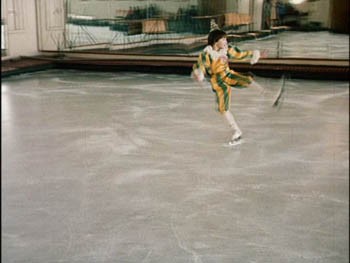 Rounding out the bonuses is Sokurov's mid-1980s short film "Patience Labour." It's a lively ten-minute montage of various figure skaters practicing, showing the hard work and the spills that lead to a successful performance.

FINAL THOUGHTS:
Alexandra is a fascinating film. Russian director Alexander Sokurov takes the viewer along for a grandmother's visit to the Chechen front, following her as she explores the army camp and the nearby village, drinking in the experience. A metaphorical movie with shades of Samuel Beckett, its message is both political and human, and the patient eye of Sokurov's camera lets the material take on its own natural pace. Alexandra works on the viewer in subtle yet ultimately powerful ways, ones that aren't immediately apparent, though once you've taken it all in, will likely hit you like the proverbial ton of bricks. Highly Recommended. 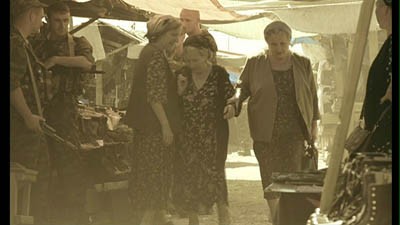