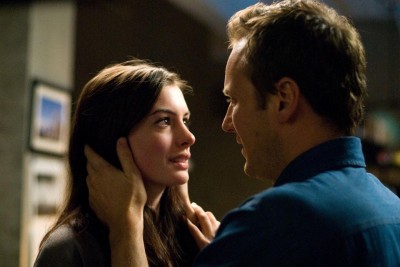 Even while boasting marquee-ready participation from stars Anne Hathaway and Patrick Wilson, "Passengers" was still sentenced to a minuscule, contractually scented release late last year, killed off by a disinterested studio that didn't want to spend the hefty marketing bucks on a motion picture that's nearly impossible to hype. While undeserving of such a humiliation, "Passengers" remains only a halfway proper pass at a big screen "Twilight Zone" episode, mixed uncomfortably with gauzy romance novel aspirations. It's a blurred pass at suspense and hesitant smooches, but with Hathaway and Wilson around to carry most of the workload, at least it's well acted.

When a horrific airplane accident leaves only a few passengers alive, psychotherapist Claire (Anne Hathaway) is hastily called in to counsel the survivors. While the group is suspicious of Claire and duly on edge after the crash, Eric (Patrick Wilson) is enlivened by the event, joking around and relentlessly flirting with the doctor. Succumbing to his oddball charms, Claire crosses dangerous ethical lines with Eric, opening herself up to the damaged man, creating a bond that's soon put to the test when suspicion of an airline conspiracy to cover up an accident detail arises, leading to the strange one-by-one disappearances of her clients.

Director Rodrigo Garcia has carved out a niche for himself in Hollywood as a sensitive soul, with poignant ensemble films such as "Things You Can Tell Just by Looking at Her" and "Nine Lives" to his credit. In a way that's not immediatley perceptible, "Passengers" also falls into the compassionate category, commencing on a sustained note of shock and concern that's nicely emphasized by the cast. While keeping the intrigue bubbling, Garcia is more fascinated with developing the characters of Claire and Eric, getting them to a point where their attraction is believable and Claire's professional violation logical. I wasn't particularly moved by the storyline of "Passengers," but it's easy to sense the effort to bring the subplot a candlelit consideration the genre wouldn't normally allow. It's an admirable position for Garcia to hold, but it ultimately unravels the film.

"Passengers" isn't sure if it wants to create a tender atmosphere or if it wants to encourage serious nail-biting worry. Garcia sweats to find a stable middle ground for Claire to romance Eric and be stalked by shadowy mystery men, but the picture stumbles to satisfy both elements, leaving the screenplay (credited to Ronnie Christensen) often puzzling and quickly uninviting, waiting for the distended conclusion to tie up all the loose ends. Of course, the protracted journey to the resolution is filled with a tepid attempt to create a semi-villain character (played by, of course, David Morse) and whiffed swings at emotional catharsis, as Eric goes from survivor euphoria to profoundly shell-shocked as the pieces of his air disaster nightmare start to arrive.

"Passengers" is ultimately a puzzle of some sort, careening toward a twist ending for maximum awe. I rarely felt invested enough in the story to care how everything turns out, but I was taken with Wilson and especially Hathaway, who's about as natural an actress as they make 'em these days. The pair share persuasive chemistry and deliver satisfyingly when the script requires them to express relationship anxiety and eventual psychological chaos. The actors elevate the material, and while they don't articulate Garcia's minimally spiced mounting dread to satisfaction, Hathaway and Wilson at least communicate credible googly eyes.

Being a film of both forbidding and sensual tones, the anamorphic widescreen (2.40:1 aspect ratio) presentation on "Passengers" maintains superb color sensitivity, with deep black levels that never dissolve into mud. Chilly autumnal locations (shot in Vancouver) are replicated with a pleasing crispness, and cinematographic detail is generously retained.

The 5.1 Dolby Digital sound mix really awakens when entering the film's spookier elements, with enjoyable, heightened surround detail coming into play as the lead characters start to comprehend their reality. A majority of the fluid sound design is more concerned with soothing qualities, creating an inventive environment for the film to comfort and chill, often within the same scene. A French 5.1 track is also included.

A feature-length audio commentary with director Rodrigo Garcia and actor Patrick Wilson takes a more artistic conversational route, forgoing complicated technical articulation to focus on motivational stimulation. Garcia maintains the pace to the chat, poking Wilson (who's much sillier than his professional choices reveal) with questions on his mindset while shooting. While a few gaps of silence arise and some detours into time killing (recorded on November 4th, 2008, Garcia asks Wilson if he voted) confuse, the track is educational and refreshingly candid, as Garcia talks briefly about troubles with the script that were never solved to his satisfaction. If anybody should be thrilled with this commentary, it should be Hathaway, who is relentlessly praised throughout the discussion.

"Deleted Scenes" (7:18) are three sequences cut to pare down the narrative weight, focused on Claire as she slowly accumulates pieces of her ultimate awareness.

"Analysis of the Plane Crash" (16:26) is a technical featurette on the special effects and stunt work that brought the plane crash centerpiece to life. Interviews with F/X gurus and Garcia explore the visual inspiration for the sequence, underlining the immense effort of the crew to nail down every last horrifying detail of an air disaster.

"The Manifest & Making of 'Passengers'" (23:14) is a standard BTS featurette, interviewing cast and crew for their thoughts on the filmmaking experience and the meaning of the film. It's a platitude carnival, but these insignificant making-of productions usually are; made only to fill gaps in the HBO broadcast schedule and pad DVD releases.

Where "Passengers" ultimately goes is locked inside the spoiler vault, but I must state that the resolution here is a bit hard to swallow, and possibly too easily telegraphed by students of the suspense genre. While the film is working overtime to serve up a humdinger of a left turn for the final act, perhaps it's best to ignore the hysteria and focus on the relationships, and the fine performances that bring them to life.