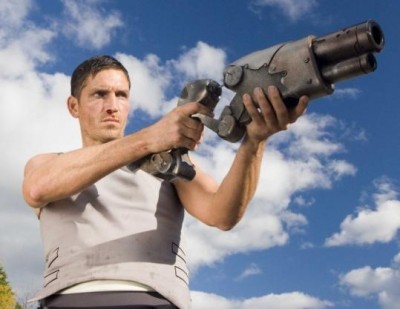 When we last left the state of the Vikings on film, it was in the hands of "Pathfinder," a wretched motion picture that drained all the fun out of the brutal, mead-swilling culture. "Outlander" is a chance to redeem the legacy of the Vikings on the big screen, taking known quantities such as swords, machismo, and lush forest locations and adding what was always missing from the bearded tales of yore: bloodthirsty monsters from outer space!

When his spaceship crashes down to Earth, circa 709 A.D., alien Kainan (Jim Caviezel) is left with little resources and a quest to destroy the beast that was contained onboard. Observing a familiar pattern of destruction in the immediate area, Kainan finds himself captured by a tribe of Vikings who want to know just what caused such hostility. Endearing himself to King Rothgar (John Hurt) and his daughter Freya (Sophie Myles), Kainan hopes to lead the charge to capture the infamous Moorwen, the dragon-like monster that stalks the land hunting for human prey. Teaming up with a rival clan, led by Gunnar (Ron Perlman), Kainan and Prince Wulfric (Jack Huston) head out to slaughter the menace, only to find the primitive weapons of the era are no match for this ferocious, bioluminescent beast.

"Outlander" is one amusing motion picture, and it helps that the filmmaking remains refreshingly alert throughout. Director Howard McCain deftly mixes cues from Viking iconography and sci-fi staples to indulge in a straight-up creature feature, a swift B-picture that knows its audience and endeavors to offer fans a full plate of monster mayhem, bloodletting, and sword-happy heroics.

It's something of a miracle that "Outlander" doesn't resemble a flimsy Sci-Fi Original Movie, with credit going to McCain and his crew for their efforts to make the film feel lived in, and not just shot haphazardly in a generic Canadian backyard. Filling the frame with moisture, smoke, and filthy men, "Outlander" creates the feel of a graphic novel, presenting a heightened naturalistic backdrop for these fantastical events. An adventure story at heart, McCain takes the action into forests, caves, and underwater, constantly trying to drum up a sense of excitement and otherworldly threat while embracing the gruff Viking lifestyle that typically involves serious beard growing, drinking mead from the carcasses of dead animals, and games of balance on wobbly combat shields. Unlike many sci-fi tweaked tales, "Outlander" feels complete and ready for war, with McCain creating a world to play with, not just a genre to exploit for maximum stupidity.

The Moorwen sequences are the focal point of "Outlander," though it comes as somewhat of a disappointment to find the creature molded from strictly CG parts and labor. While an arrestingly designed beast, the cinematography and editing prefer to keep the monster at a safe visual distance (a mid-movie bear attack is impossible to focus in on), which can be a frustrating prospect once the third act swings around. The creature is saved by the screenplay, which carefully proposes that the Moorwen might not be the bone-munching demons their reputation suggests. It's a tweak on the formula that keeps "Outlander" fresh enough to stay invested in the gruesome happenings.

While scrubbed diligently by various post-production processes, "Outlander" comes to DVD with a vibrant anamorphic widescreen (2.35:1 aspect ratio) presentation. The action plunges into natural light environments, yet a stunning amount of dark textures retain generous detail, and the bloodless colors of the world remain crisp, with only a minimal amount of EE visible. The Moorwen sequences add the most visual dimension to the frame, and the moments showcase clear visual communication, with generous monster-flesh minutiae.

A film of immense aural dimension, the "Outlander" DVD has quite a frisky 5.1 Dolby Digital sound design, with a full-throated Viking punch added to the action sequences, contributing a delightful rumble to the whole experience. The Moorwen sequences are equally as pronounced, with sharp directional effects maintaining tension and bite. Dialogue and scoring are sufficiently separated, though conversations are lost a little when the story enters noisy, enclosed locations.

A feature-length audio commentary from director Howard McCain, producers Chris Roberts and John Schimmel, and writer/executive producer Dirk Blackman keeps to the technical side of the street, with extensive conversation about location shooting (gorgeous, but heavily augmented), CG logistics (difficult), and factual accuracy (a few missteps). McCain leads the track with his enthusiastic detailing of special effect shots and cinematic homages, while also answering the film's unreasonable critics who picked apart the logic of this fantasy feature. The gentlemen reveal plenty of information about the difficult "Outlander" production and remain candid about the picture's shortcomings, making for a charming commentary experience. Additionally, it's revealed that actress Sophia Myles's first name is pronounced "So-FYE-ah." You learn something new every day.

"Deleted Scenes" (41:34) restore what was cut for time and budget, with generous portions of lost subplots and exposition, presented here in an unfinished state. Exhibiting an extended opening, the reveal of Kainan's wounded co-pilot, a true kingly arc for Rothgar, and a host of character snippets, the cuts would've certainly made for a slower picture, but one of a more intriguing depth. 41 minutes is a long haul, but there are interesting nuggets of characterization and location here to savor.

"Visual Effect Tests" (8:43) display crude CG experimentation with the film's various creatures and spaceships, including some early backyard footage to make sure the concepts play correctly on film.

"Animatics" (23:50) showcase the usual routine of pre-production planning from all areas of the story, including a deleted Moorwen attack.

And the film's Theatrical Trailer is included.

"Outlander" is a fluid genre exercise that satisfies cravings for action and Norse mythology in one fell swoop. It's a full-bodied adventure movie that's responsive and reverential to the needs of sci-fi escapism. Vikings? Aliens? Swords crafted from space steel? Ron Perlman as a tattooed, hammer-wielding warlord? This is an easy film to appreciate.