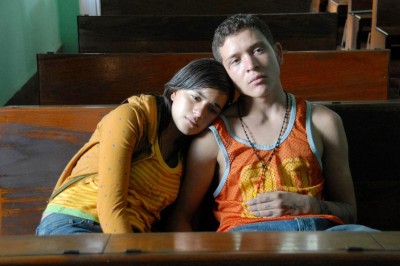 A little over a year ago, the simplistic, heart-tugging immigration drama "Under the Same Moon" opened in theaters, pouring honey and tears over the complicated subject of hazardous Mexican border crossing. While not explicitly a story of migration, the drama "Sin Nombre" boldly assumes a bleaker perspective of Mexican and South American individuals who seek the comfort of America any way they can find it. It's one of many captivating, searing depictions of fear in this unflinching, outstanding debut feature film from director Cary Fukunaga.

A conflicted gangbanger trapped in one of Mexico's most violent organizations, Willy/El Casper (Edgar Flores) is caught lying to his superiors to protect a relationship with a clueless local girl. When his love is murdered by the gang, Willy is left in ruin, electing a pivotal moment to betray his brotherhood and make a beeline to the Texas border. On a train that ferries illegals throughout Mexico, Willy meets Sayra (Paulina Gaitan), a young Honduran also on a passage to America, and the two strike up an unexpected alliance. When word of Willy's betrayal reaches back to his home, the gang members embark on a hunt for the deserter, with El Smiley (Kristian Ferrer), the 12-year-old boy Willy tutored in the gang, encouraged to use the opportunity to get his first taste of mob justice.

"Sin Nombre" is a dense, bracing selection of cinema that cuts into the agony of the corroded soul. With Willy as the film's focal point, Fukunaga burrows into the character's misery, identifying the complications and furious reservations of a man who's found himself at the end of his rope, unable to deal with the history of violence that's pulled his life off course. "Sin Nombre" isn't a hokey, melodramatic pass at underworld redemption; the feature employs deceptive simplicity to mine the larger emotional price of survival within a poverty-stricken land that encourages the insignificance of human life. While the structure hints at something of a chase film, "Sin Nombre" is hypnotized by the emotional tempest brewing within Willy, and how his actions and reflections bring some sense of comfort to a terrified, but muted Sayra.

Brought to menacing, sun-caked life by cinematographer Adriano Goldman, "Sin Nombre" evokes the bondage of Mexican gang life with minimal filmmaking moves. The intimidating tone is set early on by Willy's brothers, who wear epic facial tattoos and use crude weaponry to defend their turf. The filmmaking is blunt and often shocking; Fukunaga fashions a straitjacket of dread to bind his characters and the audience, carefully portioning out acts of violence to gradually draw in the viewer. It's an impressively throttled directorial job that maintains intimacy with the actors while painting on a broader canvas of immigration peril as the action moves to a dilapidated train of travelers desperate for a new opportunity. Fukunaga doesn't romanticize the community at all, instead underlining the hellacious severity of the journey through riveting scenes of betrayal, accidental death, and the questionable response of the locals, who either shower the train with fruit to eat or rocks to bruise. It depends on the neighborhood attitude.

Inching Willy and Sayra closer together as the miles collect behind them, "Sin Nombre" exhibits a marvelous command of inhibited response, as both actors deliver their mounting worry with a welcome lack of hysteria. The restraint invites a stronger connection to the characters, who are fighting their way to an endgame neither one of them quite understands. Fukunaga's draws the connection on a soulful level of respect that's forged in grief, not romance, and I was completely taken with the patient visual communication on display. By removing the melodrama, "Sin Nombre" allows itself an unsettling air of realism that's masterfully molded.

With enemies breathing down his neck and Sayra's dependence on him growing, Willy's test of survival progresses to an incredibly lean finale that mixes fragments of dramatic convention and irony with unimaginable trauma, ending on a perceptive note of confusion, though a glimmer of hope remains. It's also a finale that doesn't compromise the film's delicate framework of psychological fragility, allowing the audience to grasp the dramatics without an artificial shove. It's a capper on a confident, raw feature film that continually surprises and repeatedly devastates. "Sin Nombre" is an outstanding motion picture.