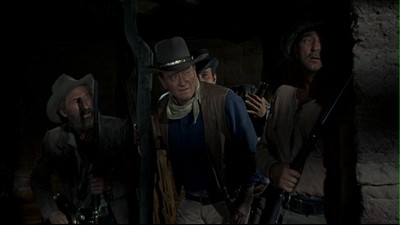 El Dorado is a 1967 Western made amidst the changing landscape of Hollywood cinema, an old war horse that plowed through the young turks at the box office and proved that there was still some life in the tried-and-true genres yet. Directed by Howard Hawks, and reteaming him with his Rio Bravo star, John Wayne, it is perhaps best recommended by its pairing Wayne with another classic tough guy, Robert Mitchum. The easy camaraderie between the two is the magic ingredient that makes this formula story pretty much impossible not to like. And as if Hawks wanted to put a little of old Hollywood side by side with New Hollywood, he tosses James Caan into the brawl to be the smart-aleck kid. The acting styles that separate the generations are abundantly obvious in their differences, and yet it adds a whole fun dimension to El Dorado, not unlike when Hawks corralled Wayne with Montgomery Clift for Red River back in 1948. Duke was always Duke, regardless of what you threw up against him.

Wayne plays Cole Thornton in El Dorado, an aging gun for hire who has survived probably as much for his healthy sense of right and wrong as he has because of his quick-draw hand. When Cole drops in on the El Dorado territory, he's told by the town sheriff, an old friend by the name of J.P. Harrah (Mitchum), that he's chosen the wrong side. Bart Jason (Ed Asner), the man who contracted Cole, is trying to muscle a local family out of their water rights, despite the MacDonalds' long history working the area. This is enough for Cole to turn down the job, but before he can get out of town, an accidental run-in with the MacDonald youngest leaves the boy dead, and the hole in Cole's conscience also has a matching bullet wound delivered by the kid's sister, Joey (Michele Carey). The girl's ambush has left a bullet lodged next to Cole's spine, an aching reminder of his unlucky kill that also brings on random, paralyzing seizures.

Cole leaves El Dorado, eventually running into trouble a couple of towns over. When he helps a knife-throwing youngster nicknamed Mississippi (Caan) out of a jam, the gunslinger not only gets a sidekick, but he also enters the radar of another fighter, a man with a scarred face that goes by the name McCleod (Christopher George). McCleod tries to recruit Cole for his gang, which is on its way to take the job with Jason that Cole turned down. Furthermore, J.P. has turned into a drunk because of a woman who broke his heart. So, Cole and Mississippi rush back to town to bail J.P. out and pay off Cole's debt to the MacDonalds. Oh, and did I mention that Cole had a thing going in El Dorado with a sexy hooker with a heart of gold (Charlene Holt)? Because he does. 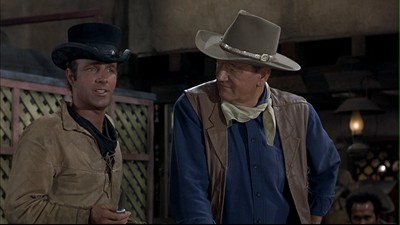 Whew! That's a lot of story! I didn't realize there were so many particulars to the set-up until I started laying them down. All of these essentially move to put Cole back in El Dorado, where he and J.P. will take on McCleod and Jason's other henchman, outnumbered but not outsmarted. Thankfully, the road to this part of El Dorado never gets burdensome, with the exposition being cleverly layered under the character development that is the real gold here. As I mentioned, the rapport between Wayne and Mitchum is surprisingly natural and full of humor, including some now infamous ad libs between the two. The seasoned pros particularly light up when they get to put the screws to Caan's character, playing their scenes as a pair of cheeky old timers who can't help but deflate the eagerness of youth with their hard-won wisdom. For his part, Caan clearly is getting a kick out of dancing around the stiff and stalwart Duke, practically tweaking his nose in some instances.

On the other side of the gender divide, Hawks and screenwriter Leigh Brackett, a rarity herself as a woman who wrote westerns, give us a pair of interesting female characters in the movie, again representing their age and experience in how different they are. First there is Charlene Holt as the madame of the town brothel, who at the start of the picture has somewhat covert romantic connections to both J.P. and Cole. Holt is an older woman with a husky voice that indicates the life she's seen, and a manner that is both tender and feminine but without sacrificing any of the strength that would be required of a woman surviving on the frontier. On the flipside is Josephine "Joey" MacDonald, the character played by Michelle Carey. A variation of the typical tomboy wild child, she ends up being more than the romantic foil for Mississippi. She is a main focal point of many of the turns of the plot, including Cole's dangerous wounding and even a very important role in the climax. She's not playing at being a fighter or waiting to be tamed, she's the genuine article.

Hawks was a pretty seasoned director by this point. He only made one more movie after El Dorado, and despite being as entertaining as it is, this penultimate effort does lack some of the slickness or visual verve that one might expect from a Hawks feature. The pacing is laconic at times, and the overall filming style is very straight-ahead. Outside of a few tricky shots in some of the gunfights--a dying outlaw falling straight down into the camera lens, for instance--there's not much to really call attention to the fact that one of Hollywood's most accomplished journeymen was in charge of this set. Or maybe that was the real trick, having proved himself so thoroughly, Hawks was confident enough to disappear and let the movie stand apart from him.

Regardless, El Dorado succeeds due to its lack of pretension. It is what it is, and what it is is a solid cowboy movie that wears its traditional values as proudly as a sheriff wears a badge. Fans of the genre or those who simply appreciate good old-fashioned moviemaking should find the film to be a satisfying treasure. 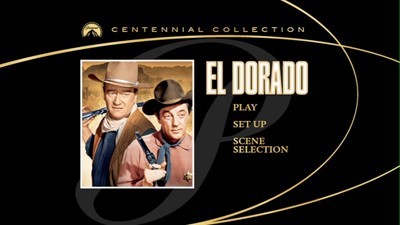 Video:
There have been multiple releases of El Dorado over the last nine years, and though I have not seen any of those (in fact, this is my first time seeing the movie at all), I feel very confident in saying that any of them would have a hard time stacking up with this new Paramount two-disc release. The 1.85:1 anamorphic transfer is flat-out gorgeous, with bright colors and a sharp picture resolution. There is no dirt, zero scratches, and outside of a single nighttime scene where I thought the black sky looked a little patchy, I've got no marks to make against the DVD authoring. Fantastic!

Sound:
The original English soundtrack is given a mono mix in Dolby Digital, alongside French and Spanish dubs. The sound is really crisp and full of nuance. The effects sound amazing. Watch out for those gunfights, they are loud!

Subtitles are also available in all three languages, including English Closed Captioning.

Extras:
El Dorado is the ninth release in the Paramount Centennial Collection, and like the previous entries in the series, its two discs come inside a standard-sized keepcase with a hinged tray, snugly resting inside a side-loading outer slipcover. Inside the case, there is a glossy interior booklet full of photos and liner notes.

Outside of the movie, the only extras on DVD 1 are two complete audio commentaries. The first is by director and historian Peter Bogdanovich. His monologue is full of the usual blend of analysis and personal stories that we have come to expect from Bogdanovich, who apparently was on the set for much of El Dorado's production. I like the info he gives, but I tend to find his manner a little self-serving and obnoxious. He's not nearly the mimic he fancies himself. To counter this, critic Richard Schickel gives us a track that is all about the movie, exhaustively digging through its history. His commentary also contains contributions by Ed Asner and Hawks biographer Todd McCarthy, and though Schickel is ostensibly the lead, the comments from the others are dropped in quite smoothly, often introduced by a soothing female voice. 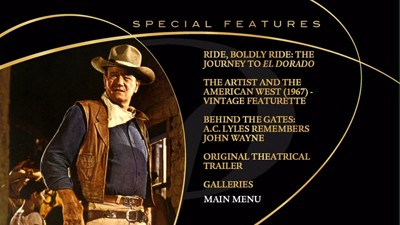 All of the commentators return for DVD 2 for the main feature, a 42-minute, 7-part documentary on the making of the movie--and it sometimes sounds like some of their clips were lifted for the commentary tracks (if nothing else, they repeat themselves). "Ride, Boldly, Ride: The Journey to El Dorado" can be played in its individual parts or as one long feature, and it covers the movie from start to finish, beginning with the state of Hawks' career (complete with audio clips from the director), the inception of the story, and all facets of production, including Hawks' relationship with John Ford and the critical reaction to El Dorado. Joining the previously established crew of chatters are James Caan, Paramount man A.C. Lyles, and film historians Molly Haskell, Scott Eyman, and Michael F. Blake. The interviews are punctuated with clips from El Dorado and some other Hawks movies, promo stills, and photos from the set.

The 5-and-a-half-minute promotional short "The Artist and the American," originally released in 1967, profiles Olaf Wieghorst, the painter whose work adorns the opening credits of El Dorado and who plays the Swede in the movie. Hawks and Wayne both appear in staged scenes as themselves.

Another 5-and-a-half-minute featurette is called "Behind the Gates: A.C. Lyles Remembers John Wayne," with the Paramount exec talking about the various pictures Duke made for the studio.

The second DVD is rounded out with a theatrical trailer and galleries featuring lobby cards and production stills.

FINAL THOUGHTS:
Though in some ways a mere under-the-radar remake of Rio Bravo, this late-in-the-game Howard Hawks western has enough of its own personality to distinguish itself as another entertaining notch in a very colorful belt. The El Dorado - Centennial Collection brings the 1967 feature to DVD as a flattering double-disc set full of extras, but any bells and whistles pale in comparison to the onscreen chemistry of John Wayne and Robert Mitchum. A shoot-'em-up with themes of age and the changing times, it's crafted with a journeyman's eye. Highly Recommended. 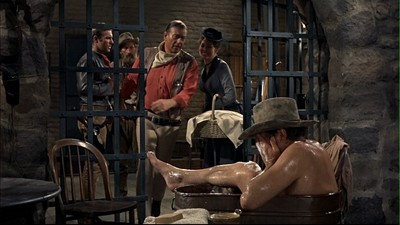