There is no such thing as an unwritten life... 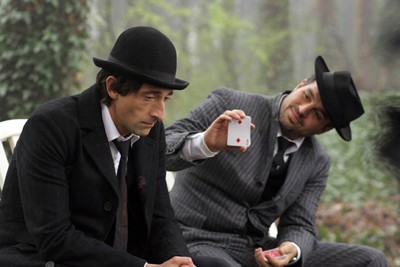 The Brothers Bloom are a pair of scamp orphans who turn a childhood prank into a con man career. Maybe. Because when their profession is invention, what do you really believe? Then again, does it matter? The best confidence game is the one where the lie becomes the truth.

Since Brick, Rian Johnson's feature-length debut, wowed audiences back in 2005 with its clever transplanting of a traditional film noir plot into a contemporary high school setting, fans have eagerly awaited the writer/director's next move. Whatever Johnson has been doing in the intervening years, it's been time well spent, as he has ably hurdled any sophomore jinx with The Brothers Bloom. Consider it as Dirty Rotten Scoundrels directed by Hal Ashby, or quite possibly a parody and/or homage of Wes Anderson films, made with the same seriousness and attention to detail as Anderson would apply. It's Bottle Rocket if it had been made after The Darjeeling Limited rather than as a fumbling first effort.

The story begins as any tale of the fantastic might, with a narrator (in this case, the great Ricky Jay) telling us the legend. Two clever and uncageable brothers, Stephen and Bloom (here Max Records and Zachary Gordon, the latter looking more like a young Sam Rockwell than a young Adrien Brody), go from one foster home to the next, before landing in a "one-act town" where they stage a little one-act play of their own. They spin an elaborate story of lost treasure and swindle the local kids out of their ice cream money. Not everything goes exactly right, but then nothing ever does. That's why Stephen planned to cover his bases, creating a secondary earning strategy that feathers their exit. Lesson learned, the older boy has found his calling, and he scoops up his little brother to go on the ride.

Cut ahead twenty years, and Stephen (Mark Ruffalo) and Bloom (Brody) are the most respected purveyors of the long con in the game. Enacting elaborate scenarios dreamt up by Stephen, the main trick is still luring their marks into the drama with a promise of adventure. Ably aided by their silent and handy Japanese henchwoman, Bang Bang (Rinko Kikuchi, as equally fantastic here as she was in Babel, though for totally different reasons), they carefully manicure their schemes to fit the target. Stephen works the grey moral ground of, in some manner, giving the victim a little of what he or she wants, be it revenge, thrills, or what have you.

Except Bloom isn't feeling it. As he tells one comely lass, his brother crafts their crimes as if they were Russian novels, and in that scenario, he is the brooding sibling who is forever unfulfilled. And, indeed, Bloom does serve that role, regularly quitting as each gig is played out. Decked out in suits and bowler hats, the tall Brody and the stockier Ruffalo look less like Dostoevsky avatars and more a silent comedy duo. Bloom would be the sensitive and hapless Laurel, and Ruffalo his forever beleaguered, always scheming Hardy. In fact, can I just say how good it is whenever Mark Ruffalo is given the more assured role? Hollywood seems hell-bent on making him mealy mouthed and indecisive whenever he is cast in a more mainstream film, and it's a misapplication of his skills. The guy is a more forceful presence than he is often given credit for. 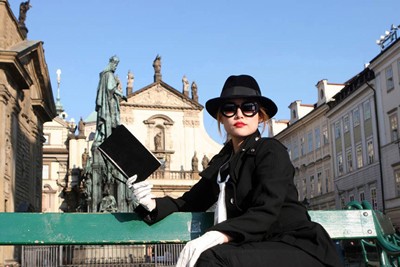 Whereas Adrien Brody's haunting stares serve him as the doubting Bloom. That long face, those deep eyes, they speak of a soulful character. In this case, he is one who is seeking love, trying to fix a childhood break where, during their first con, he let the little girl he loved get away from him. Bloom claims to want to divest himself of the scripted life Stephen spins for him, but Stephen knows he never learned to get by on his own; so, the puppet master lures Bloom back with the promise of one final score, and at the end of this one, little brother will be the one to get what he needs. Their target? Penelope Stamp (an adorable and luminous Rachel Weisz), a fellow orphan whose parents left her gobs of money and no ability to do anything with it. Though dangerously close to the quirky female savior so prevalent in many a modern male cinematic fantasy, Penelope manages to be a breath of fresh air in Bloom's existence. Though she technically has the same lack of a real life as he suffers from, the difference is that she cynicism hasn't killed her taste for adventure, she hasn't seen it all. Instead, Penelope has seen nothing and wants to make up for lost time. At times you will wonder if she maybe knows she is being tricked and simply doesn't care.

You'll be wondering how often you're being tricked, as well. That's the true lure of a con man movie, how much it makes the viewer doubt his or her own perception of what is going on. We all know someone is lying in The Brothers Bloom, but the question is who is doing what to whom. Did Stephen really hire Penelope to convince his brother he's in love? Is Bloom playing his part too well, or is he really falling for her? When does the story become the truth and the truth become story?

Part of what sets The Brothers Bloom apart from, say, a David Mamet piece like Heist or even Frank Oz's The Score, is that Rian Johnson is seemingly saying that neither matters. Whether the life you live is one that just happened or one that you invented, as long as it's authentic, who cares? Penelope accepts the life that Bloom wants to reject because she wants to be in an adventure story, complete with code names and clubhouse flags. Maybe all Bloom needs is to realize the plot twist he was waiting for has finally come along and stop overthinking it. 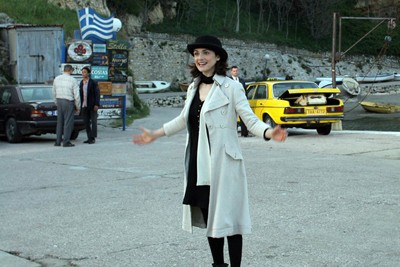 At the same time, Johnson is challenging us to dissect this cinematic construct. His whole movie is carefully planned, carefully coded, right down to the names. Stephen and Bloom both come from James Joyce, which in turn connects to the Penelope of ancient myth and her infamous web. The boys' former mentor--who they call their Fagin--makes mention of both Icarus and the minotaur (mentor/minotaur?), and his name, Diamond Dog, is taken from a David Bowie song, Bowie being another master of false mythologies and invented personas. And given how the Diamond Dog moniker is taken from Bowie's apocalyptic album of the same name, can we expect that this version, here played by Maximilian Schell, is their own harbinger of doom?

As you start to examine this stuff, you'll see my comparison to Wes Anderson is more than facetious. Both directors plan their films as meticulously as Stephen diagrams his cons. There is also an Anderson-like obsession with childhood here, of keeping that sense of wonder alive by endlessly recreating it. Likewise, by doing so in terms of story, by laying the fiction bare, Johnson is employing similar tools to the living novel that is The Royal Tenenbaums or the editing room tales of derring-do put together by Steve Zissou. Even amidst this, there is also a need to bust the mythology, to destroy the innocence once and for all, be it Bloom's wishing to fly free or Bang Bang's Barbie doll desecration.

I guess, then, that would make Stephen like the directors themselves, a master of his craft, a man who loves the details and loves lining them up to find the right order the way he might shuffle a deck of cards to pull off a trick. Be it the clothes and the set dressings or the artful title cards, or even the choice of music or the construction of a particular shot, Johnson has covered all the angles. Granted, he may not pull off the ultimate trick of making truth where once there were lies, but in cinematic terms, he has gotten as close as one can. The director has created a world that we want to believe in. Its quirks suck us in, its narrative acrobatics distract us from their own illusory mechanics, and for the length of it, we buy what The Brothers Bloom is selling. That's real storytelling. That's putting on a show. Let the curtain fall where it may....