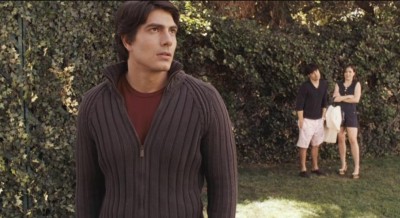 What "Table for Three" lacks in filmmaking refinement, it makes up for in sheer jazz-hands-extended thespian determination. A bustling romantic comedy that plays off the well-worn narrative concept of poisonous friendships, the film isn't the wittiest in the screenwriting department, the sharpest in the directorial arena, and looks pulled together for a budget roughly equal to a swell steak dinner. It's absent the level of Hollywood gloss one becomes accustomed to on a monthly basis, but it's easy to stay invested in writer/director Michael Samonek's shenanigans, and that's more than I could say for many similar pictures in the crowded romantic comedy genre.

Having been recently dumped by his girlfriend and abandoned by his roommate, Scott (Brandon Routh) has lost himself to depression. Eager to find someone to share the rent and some conversation, Scott stumbles upon Ryan (Jesse Bradford) and Mary (Sophia Bush), an excited couple who need a place to live and find Scott's woes endlessly fascinating. Accepting them as roommates, Scott quickly learns Ryan and Mary's co-dependence can cripple even the strongest of men. When Scott meets Leslie (Jennifer Morrison), his spirits change, but as soon as he embarks on a relationship, Ryan and Mary set out to slow him down, fearing his eagerness will end up hurting him again. Scott, reading the pair's aggressive meddling as antagonistic, attempts to distance himself from Ryan and Mary, only to find his troubles multiplying the more he pushes them away.

Samonek's script for "Table for Three" is rooted in the sort of low-budget sitcom nonsense that passes for much DTV entertainment these days. While not mean-spirited in the least, the film nevertheless has a fixation on vulgarity to make itself heard, and that's a disappointment. I dig ribald, potty mouth humor as much as the next guy, but when pushed to a point of desperation, it can sour quickly. "Table for Three" has a few of those cringe-inducing moments that might have many viewers looking to quickly bail out of this modest production, and while I can understand the hesitation, there's more here to enjoy than a tiresome string of lackluster sex gags and insincere cursing suggests.

Hard to believe it's been three years since Brandon Routh suited up as the Man of Steel in the woefully underrated "Superman Returns." Outside of a glorified cameo in Kevin Smith's "Zack and Miri Make a Porno," there hasn't been much on the Routh horizon to enjoy. "Table for Three" presents the actor pulling himself in a fresh direction, aiming toward the vocational stability of the archetypal romantic comedy leading man. The role fits Routh's gentle instincts well and he leads a cast of actors who truly seem to be enjoying themselves in front of Samonek's camera. Sharing relaxed chemistry with the increasingly appealing Jennifer Morrison, Routh hits charming notes of romantic befuddlement and burgeoning confidence that lend the material a needed heart. The courtship of Scott and Leslie never grabs the script's attention in a manner that fully satisfies the eventual thirst for syrup, but the actors sparkle with the little breathing room permitted.

As the terrible twosome, Bush and Bradford inhale a bottle of overacting pills and go for broke as Ryan and Mary, pushing themselves as broadly as I've ever seen them. In terms of characterization, it's a believable leap, but as the film wears on, it's clear Bush is hungrier for crazy, upstaging Bradford over and over as the duo bust out the verbal diarrhea and camera mugging to portray the misunderstood couple from hell. There are times when the mania is a kick to watch, especially when played off of Scott's bewilderment as the couple learns the joys of bickering and the anxiety of separation. Acting this exaggerated normally stumps most directors, yet Samonek takes it all in stride, encouraging his cast to bulge out in perverse ways, but he contains the eccentricity with promising skill.

The 5.1 Dolby Digital sound mix on this DVD is an extremely limited affair, mostly devoted to preserving the dialogue. The cartoon antics add a smidge to a surround environment, including an effective use of distant sounds, but the majority of the listening experience is comfortably blunt.

A feature-length audio commentary with director Michael Samonek delivers all the backstage information a person could want to know about "Table," including an itemization of performer accomplishment (especially from Morrison, who brought in her own ideas for the character), low-budget filmmaking difficulties, and screenwriting intent. Samonek comes prepared and remains in high spirits throughout the track. There's nothing distinctly revelatory to snack on, but the chat remains interesting.

"Three's a Crowd" (29:32) basically repeats Samonek's commentary, though everything here is hosed down by a cripplingly dull BTS featurette direction that interviews the cast and crew on-set on how great their movie is. Obvious character motivation and thematic reach is discussed in depth, while the rest of the running time is plugged with redundant clips. Stick with Samonek's more enlightening track.

A Trailer has been included

With expectations strapped firmly to the ground, "Table for Three" is suitable entertainment for an agreeable mood. It's an actor carnival trapped inside a web of harmless clichés, and while the material can be corrosive at times, the film manages to please with its amiable execution.