Man with the Golden Gun, The

MGM // PG // May 12, 2009
List Price: $34.98 [Buy now and save at Amazon]
Review by Stuart Galbraith IV | posted May 31, 2009 | E-mail the Author
The Man with the Golden Gun (1974) and its immediate predecessor, Live and Let Die (1973), are very much a matched set. More intimate, less epic than the James Bond movies to follow (The Spy Who Loved Me, Moonraker), they were also slightly more serious and faithful to the literary Bond than all the later Roger Moore entries save For Your Elyes Only (1981). Moore himself is more like James Bond in these than the Beau Maverick/Simon Templar/Brett Sinclair variation he'd waltz through in all his remaining 007 films. They were the last two to be directed by Guy Hamilton and co-produced by Harry Saltzman and, significantly, they emulated and adapted popular movie trends rather than spearheaded them. Live and Let Die awkwardly dropped 007 into the world of blaxploitation cinema, while in part The Man with the Golden Gun emulates martial arts movies, especially the influential Enter the Dragon (1973).

Yet despite its flaws The Man with the Golden Gun holds up much better than Live and Let Die, and its smaller scale and leisurely (if occasionally draggy) pace is welcome when compared to the overproduced Bonds of more recent years.

The Fox/MGM Blu-ray disc, with its Lowry restoration, looks terrific, a big step up from Live and Let Die, though partly this is due to the great use of its Asian locations. There's nothing new in the glut of extras, other than some nice high-def remastering here and there, but there're still oodles of supplements to keep fans busy for days. 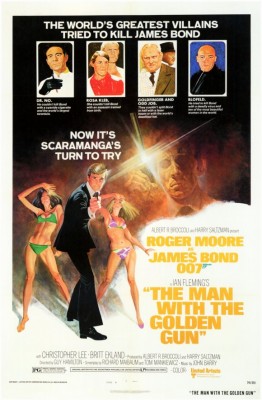 MI6 receives a gold bullet with "007" etched into its surface, and "M" (Bernard Lee) believes this to be a message from KGB-trained assassin Francisco Scaramanga (Christopher Lee) that Bond is the killer's next $1 million hit. The film is largely concerned with James Bond's efforts to find the mysterious, elusive ex-circus performer, and a "Solex Agitator" in his possession, a device instrumental in solving the present energy crisis.

After a brief, utterly superfluous visit to Beruit (filmed entirely on Pinewood stages and its backlot), Bond travels to Macau, where he visits the man who constructed Scaramanga's unique gold pistol, gunsmith Lazar (Marne Maitland). Clues lead him to Andrea Anders (Maud Adams), the assassin's mistress. Meanwhile, singularly inept British Agent Mary Goodnight (Britt Ekland, who co-starred with Lee in The Wicker Man just before this*) joins the case, quickly proving to be more of a hindrance than a help.

The Man with the Golden Gun has its ups and downs. The film has one of the weaker title tunes (performed by Lulu) with especially goofy lyrics ("His eye may be on you or me. Who will he bang? We shall see - oh, yeah!"), and the pre-credits sequence is weak: On Scaramanga's exotically beautiful island retreat - filmed in Phang Nga Bay, near Phuket, Thailand, an impressive location - a Mafioso-type assassin (Marc Lawrence, all but reprising his acerbic gangster character from Diamonds Are Forever) comes to the island to kill Scaramanga, on instructions from diminutive Frenchman Nick Nack (Hervé Villechaize), Scaramanga's personal assistant. But it's all just a ruse to provide the assassin with a little target practice.

The problem with the sequence, which also sets up the big climax at the end (the final showdown between Bond and Scaramanga), is that Lawrence, as he was in Diamonds Are Forever, is a stereotypical Hollywood hood, almost a cartoon, especially in the wake of The Godfather and its sequel (the latter released almost simultaneous with this). It occurred to me recently that this sequence would've played infinitely better had the producers splurged and cast a name actor well-known for his hard-boiled films and/or TV roles (such as Lee Marvin, James Coburn, Robert Vaughn, etc.), tapping them for an extended "guest star" appearance along the lines of how Yul Brynner was ingeniously used in Westworld (1973). That would have made Scaramanga's killing seem more spectacular and less perfunctory, and immediately have established him as a serious threat to Bond. As it is, Lawrence's gunman is dispatched easily and we see almost nothing of Scaramanga's famed skills as an assassin, though the screenwriters do improve upon Fleming's literary character by making him, essentially, the dark side/mirror image of Bond, albeit in an underdeveloped manner.

Though it seemed very lightweight at the time, in retrospect the comedy is moderate compared to the later Moore Bonds. Some of the humor is actually quite good:


However, the decision to bring back redneck Louisiana sheriff J.W. Pepper (Clifton James, reprising his role from Live and Let Die) was a mistake. Though played with enjoyable gusto by James, the character is utterly out of place in the Klongs of Thailand. That a character like Pepper would even consider vacationing in Southeast Asia is a big stretch; that he'd turn up later in a Bangkok car dealership (what for?) stretches credibility well past the breaking point.

However, The Man with the Golden Gun doesn't get the credit it deserves in making Bond a bit more brutal, in keeping with the Fleming novels. He threatens to break Andrea's arm at one point, slapping her around before bedding her - in surely one of the most misogynistic scenes of the entire canon. During the course of the film he also threatens to kill Nick Nack and shoot Lazar in the groin ("Speak now or forever hold your piece," Bond says, grimly), and admits it would "be a pleasure" to kill Scaramanga.

Not surprisingly, Christopher Lee makes a superb Bond villain, but the character isn't up to Lee's performance. Some Freudian attempts at characterization, with Scaramanga's gun stroking Andrea's face in an overtly phallic way, are laughable. Except for one throwaway scene, the writers also never really impress the audience with Scaramanga's skills as a paid assassin, and can't seem to decide whether to make him the strong and silent type (Lee awkwardly as no dialogue in some scenes, rather like his Dracula) while at other times it tries to make him both erudite and cultured yet also a philistine. Fortunately, Lee is so good throughout that the audience hardly has the chance to notice these inconsistencies.**

Though Ekland is cute, Mary Goodnight is stupid and inept to the point of audience exasperation. Those who regard Denise Richards's nuclear scientist character from The World is Not Enough as the single-worst Bond girl probably haven't seen this. Though Richards is less appealing than Ekland, Goodnight is by all odds the dumbest. (Gloria Hendry's CIA agent in Live and Let Die was pretty useless, too; perhaps this reflects a bit of chauvinism on the part of otherwise intelligent and creative writer Tom Mankiewicz?)

Villechaize nearly steals the film as Nick Nack, a character obviously intended as a pint-sized Oddjob (from 1964's Goldfinger), but injected by the actor with such devilish charm and individuality that he remains one of the series' best secondary villains. The prolific but underrated Soon-Tek Oh, an actor who consistently has avoided playing Asian stereotypes and has many interesting roles to his credit (including several memorable appearances on TV's M*A*S*H) is fine as Lt. Hip, Bond's Asian liaison.

The excellent use of the Macau, Hong Kong, and Thai locations compensates for the picture's obvious scaling back in other ways. The Beirut scenes look rushed and something like an episode of The Saint - during a fight scene in a dressing room, a jarred mirror painfully reveals the entire crew in its reflection. In Scaramanga's funhouse, which isn't nearly as varied and labyrinthine as it should be, the "wax" dummy of Al Capone is seen blinking in one shot. Bond blows up the villain's hideout at the end, as usual, but it's manned by a single henchman, not counting Nick Nack.

But the picture is clever and extremely well done in many other respects. The art direction by Peter Murton, Peter Lamont, and John Graysmark looks great on this Blu-ray: the interior sets at Scaramanga's estate, and the oblique angles of the sets aboard the half-sunken Queen Elizabeth in Victoria Harbor, used as MI6's Hong Kong base of operations. (In all likelihood, these scenes were influenced by The Poseidon Adventure, a huge hit still a fresh memory in early 1974.) 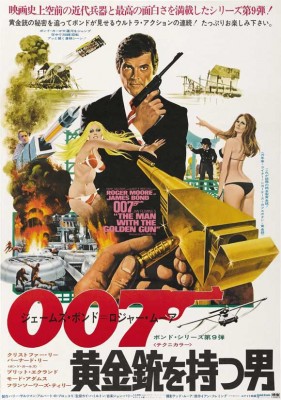 As stated in my other Bond reviews, a big turn off is the "smart menu technology," which is quite inferior to the menus created way back in 1999 for the DVD releases. The big problem is that they are hopelessly confusing, divided as they are with such cryptic headings as "Ministry of Propaganda," "Mission Dossier," and "Declassified: MI6 Vault." Even if you know what you're looking for, this menu isn't going to help you find it.

The supplements all are carry-overs that originated either in the October 2002 "Special Edition" or the May 2007 "Ultimate Edition" DVDs: 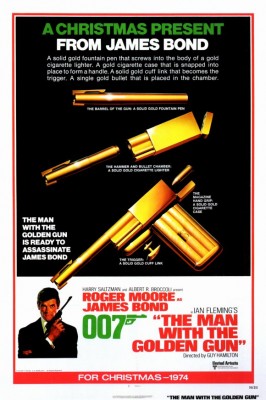 The Man with the Golden Gun is a mixed bag, but overall a very entertaining, satisfying if imperfect entry. The new Blu-ray looks great and is a worthwhile upgrade from past standard-def DVD versions. Highly Recommended.


* Lee, meanwhile, shares screentime with a number of faces familiar to Hammer Horror fans, including Marne Maitland and James Cossins.

** Another peculiarity of the script: Andrea is loathe to reveal anything about her employer in the privacy of her hotel suite, but later on it's revealed that it was she, not Scaramanga, who sent the bullet to 007, hoping that he'd rescue her. So why is she so button-mouthed?