Universal // PG-13 // June 5, 2009
List Price: Unknown [Buy now and save at Anrdoezrs]
Review by Tyler Foster | posted June 7, 2009 | E-mail the Author
Note: Some elements of this review have been repeated in my DVD review of Land of the Lost, although they're mostly different. 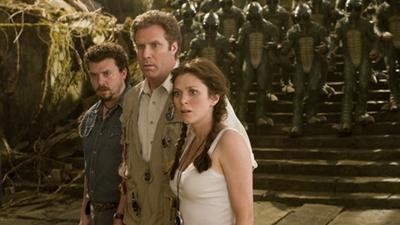 "They just do the same thing over and over," is a common complaint I hear about Hollywood comedians, and it illustrates their biggest challenge, because repeating themselves, essentially, is what a comedian does. They hone a handful of comic personas until they've got an audience favorite (a process documented by shows like "Saturday Night Live"), and it's not surprising that most successful film comedians have a fast-burning hot streak turn into a string of failures: a new star appears with a fresh style and suddenly the old schtick seems outdated. Once that happens, it's either shift gears (like Bill Murray's dramatic reinvention), fade away (Dave Chappelle), or end up a depressing reminder of the past (Mike Myers and Eddie Murphy). Some even get lucky: Jim Carrey revived his popularity with Yes Man, which I liked, despite Carrey's zany, rubber-faced routine being the movie's least amusing ingredient.

That brings us to Will Ferrell, the decade's prime example. It's hard to believe that Ferrell's star-making Old School only came out five and a half years ago, because Brad Silberling's Land of the Lost is the 12th movie he's starred in since then (not counting cameos in Wedding Crashers and Starsky & Hutch or his supporting role in The Producers). Ferrell's comedy persona splits between blowhard cockiness or panicky exasperation, and LotL is no different (although he's got range, turning in excellent performances in the underrated minor classic Stranger Than Fiction and Woody Allen's likable Melinda and Melinda). A few years ago, this exact same movie would have been a surefire blockbuster, but with the Seth Rogen and the Judd Apatow crew commanding the comedy world, LotL opened to a critical drubbing and apparent box office failure. But even aside the comedy curse and my tendency to go against the grain on Ferrell's movies, I'm not sure why this lightweight adventure took so much flak.

Most of Ferrell's films are shepherded by Adam McKay, a former "Saturday Night Live" writer, who swaps out with fellow alums Chris Henchy and Dennis McNicholas for this film. I don't have a problem with McKay, but I appreciated the change; with McKay, the friendly, self-effacing part of Ferrell's act rarely gets to come out (McKay seems to favor angry comedy), so it's a relief to see him as everyman Dr. Rick Marshall, whose tachyon time warp theory about multiple dimensions is mocked by scientific geniuses such as Stephen Hawking, "Today" show host Matt Lauer and Marshall's grade-school science class. 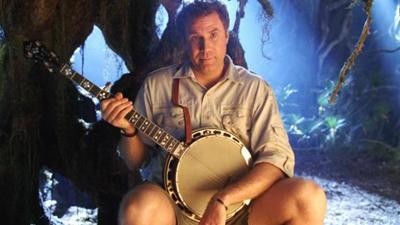 His failures have caused an eating problem, which he reveals, shamefully, to ex-Cambridge scholar Holly Cantrell (Anna Friel). "I thought maybe a trip to Arby's would give me some confidence. No dice," he laments after building his dream, a device called a tachyon amplifier. Marshall is the opposite of Ron Burgundy or Ricky Bobby: he's been laughed at before, and is already prepared to be laughed at again.

Of course, the tachyon amplifier does get switched on eventually, in the company of Will (Danny McBride), the owner of a fireworks shack and cave attraction in the middle of the desert, and Marshall, Will and Holly find themselves in an alternate dimension, a weird crossroads of time and space (an amusing counterpoint to Will's cave ride, which uses industrial soap runoff as a river and has empty beer cans floating inside of it). The movie's appeal is similar: it's a mishmash of familiar and amusing junk, converging in a slightly surreal ball of cosmic ridiculousness. I don't know how many movies could successfully contain a race of mysterious lizard men and beautiful primate women, giant crab, time warps, songs from A Chorus Line, Matt Lauer, a drug trip and an angry T-rex named Grumpy, but it can't be a long list.

The universe is a feast for the eyes, thanks to production designer Bo Welch, who gives the dinosaur jungle a purposefully pastel, cartoon-like look that seems faintly reminiscent of the television show (although the film leans on its one major set a little too much), and makes the desert a slick, modern, vividly-colored paradise, which director Silberling runs with. Even if the dinosaurs are clearly CG creations, Silberling's direction is excitingly hand-held, giving the effects more weight than they deserve on their own. Ferrell and McBride follow up by riffing on everything in a laid-back way, including the discovery of a giant crystal that works like an autotuner (inspiring them to sing Cher's "Believe") and a hotel pool in the middle of nowhere. Ferrell also does a nice rendition of the show's theme song on a banjo he discovers, and Leonard Nimoy lends a vocal cameo, which, frankly, is just awesome.

Land of the Lost features a fair amount of gross-out humor, including some implied Sleestak sex, inappropriate touching from Chaka (Jorma Taccone), and a violent velociraptor scene that ends with a disembodied arm, which is likely to cause complaints from parents bringing kids, but frankly, I'm more apt to ask why people are demanding PG-13 movies be family-friendly than to suggest the filmmakers could have toned things down. There are multiple child-friendly franchises that consider pushing the boundary and end up backing off (Scooby-Doo, for example), so I'm certainly not going to criticize Silberling and company for not pandering to kids (not to mention the rating stands -- in case people have forgotten -- for "parents strongly cautioned"). The scene with Carrey's elderly neighbor in the aforementioned Yes Man felt more out-of-place than the jokes in Land of the Lost, because at least here they're part of a tonal whole. 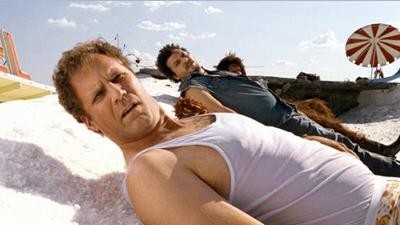 Admittedly, during the third act, things get a little too formless. The movie's conclusion feels like it's been pasted together from several varying attempts, with the characters less moving around in a convincing manner than merely appearing where the movie wants them to at the right time. But it's a minor quibble, as is the question of whether or not the film version is faithful to the show (it should be apparent, shouldn't it? They changed two of the three main characters and their relationship to one another, so that's a pretty big sign). I may not sound like I'm defending Land of the Lost very much, but it's a rickety, small-scale pleasure. "I don't want to die in a Hummer!" Ferrell screams during one of the movie's T-rex chases. New angle or no, Ferrell's movie career doesn't deserve to go out like that either.