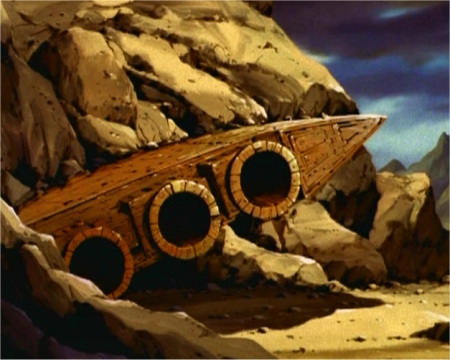 As one of the most successful franchises in American pop culture history, The Transformers have entered their 25th year in the public eye. Based on Hasbro's toy line of the same name (which, in turn, was based on a Japanese toy line by Takara), their success established a strong connection between animation and marketing for younger audiences. Case in point: Hasbro's own G.I. Joe was relaunched in 1982---just two years prior to The Transformers---and after an FCC regulation was dropped in 1984 (which prohibited companies from broadcasting product-based animated shows), all bets were off. The swift success of The Transformers that year was also due to a Marvel Comics line based on the toys, which led to an avalanche of sales, spin-offs...and, of course, the infamous 1986 motion picture. In short, you'd be hard-pressed to find a thirty-something not familiar with this group of transforming robots from the planet Cybertron.

The first season of the 1984 animated series is the subject of today's review, and it proves that even the thinnest of concepts can be sold to kids successfully. Our story begins nearly four million years ago on Cybertron, where the honorable Autobots (led by Optimus Prime) battle the dastardly Decepticons (led by Megatron). Their conflict is not unlike the relationship between Tom & Jerry: the Autobots and Decepticons have never gotten along and probably never will. After crash-landing on Earth, they awaken in modern times and quickly resume their conflict, this time fighting for the energy it would require to return home. This origin story is presented in the three-part pilot, "More Than Meets The Eye", which also served as a tagline for the franchise in general. From there, 13 more episodes would comprise the rest of Season 1---and although its initial success was massive, the first animated series would be virtually gone from domestic television in less than four years. Subsequent relaunches---which would include Generation 2, BeastWars and the newer live-action movies, among others---have kept the Transformers name alive during the last few decades, but many die-hard fans consider the 1984-87 series as its creative pinnacle.

This first year of The Transformers, which ran during the 1985-85 television season, includes the following episodes: 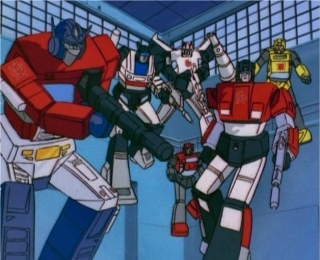 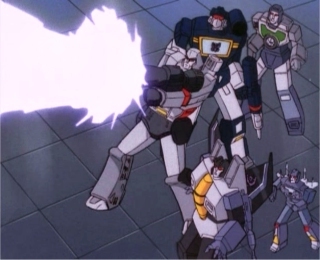 Again, it's no secret that The Transformers---or most animated shows aimed squarely at kids, for that matter---focused its attention on marketable characters, not compelling storylines. At its heart, The Transformers presents a simple tale of good vs. evil, while even the most complex problems are typically wrapped up in a 23-minute timeframe. Still, there's more urgency during this first season---in certain stretches, at least---that focuses on the Autobots and Decepticons struggling to find the energy needed to return to their home planet. As the years wore on, the situations grew more repetitive and predictable---but the same could be said for most animated shows from that era, from G.I. Joe to Teenage Mutant Ninja Turtles.

During this short 16-episode run, a handful of episodes manage to stand out: aside from the respectable three-part pilot "More Than Meets The Eye", other highlights include "The Ultimate Doom" (another three-part story), "Heavy Metal War" and the respective Dinobot / Insecticon introductions. These new characters presented more toys to be sold, of course, but they helped to add new elements to an already layered group of good and bad guys. There's really not a bad episode in the bunch, though plenty of unintentionally hilarious dialogue certainly shows its age. Overall, those looking for a quick nostalgia fix---or newer fans who've never witnessed The Transformers' earliest years, even---should find this to be an entertaining batch of 1980s goodness. Die-hard fans may already own these in some form or another...but as we'll find out, this particular release is special in more ways than one.

Originally released on DVD by Rhino back in 2002, Transformers: Season One has been granted something of a technical upgrade by pop culture enthusiasts Shout Factory. Episodes are presented in their original broadcast format, including commercial bumpers and opening/closing credit sequences. In addition to a series of visual corrections and a new audio mix (again, more on those later), a number of newly-recorded retrospective and vintage bonus features have been included on Disc 3. Though it's hardly a treasure trove of material, fans should be satisfied with this sleek three-disc package from top to bottom.

NOTE: Shout Factory has already announced a complete series collection later in the year---but for those who can't wait (or aren't interested in later volumes), this three-disc set is definitely worth looking out for. Let's take a closer look, shall we? 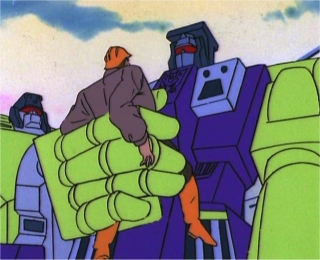 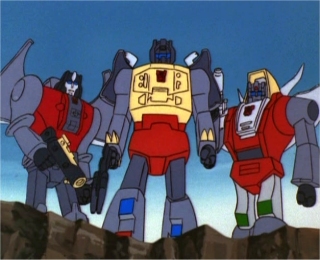 It's not a perfect picture, but die-hard Transformers fans should appreciate what Shout Factory has done here. Though the original Rhino collections weren't bad in certain respects, they were apparently taken from a workprint source and featured a number of technical inconsistencies; these included animation errors and incorrect colors, in most cases. Shout Factory describes the situation as follows: "Transformers DVDs released prior to out 25th Anniversary Edition were missing animation seen in the original broadcast. We did extensive research, found the discrepancies between the original broadcast masters and the restored masters used for the last DVD release, reinserted the correct animation, and color corrected it as best we could to match the shots before and after."

While I don't have the out-of-print Rhino collection on hand to cite specific examples, it's evident that Shout Factory went to great lengths for the fans here. The 1.33:1 transfer looks relatively clean and clear with crisp colors, though instances of dirt and debris---not to mention a few pesky interlacing issues---keep this collection from looking even better. Overall, this is a certainly a visual improvement, at least from a purist's point of view.

There's more good news in the technical department, as Shout Factory has created a new Dolby Digital 2.0 mix from the original audio source. This is a tastefully-done audio track and features none of the "new" effects found on Rhino's overcooked 5.1 Surround mix; in fact, the only limitations seem to be from the source material itself. Dialogue and sound effects rarely fight for attention, while solid stereo separation creates a relatively solid soundstage. Unfortunately, optional subtitles and Closed Captions have not been included during the episodes or bonus features. 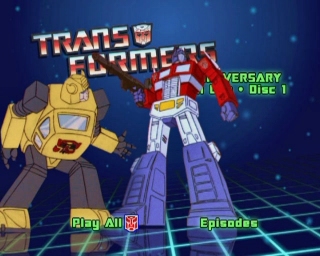 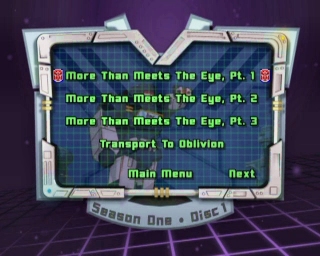 Seen above, the lightly animated menu screens are simple and easy to navigate. Each 23-minute episode has been divided into roughly five chapters, though no chapter sub-menus are present. A handy "Play All" feature is included, which also enables the viewer to watch multi-part episodes seamlessly; that is, without opening / closing credits or "previously on / next on" segments. This three disc set is housed in two slim keepcases, which are tucked inside an attractive metallic slipcover. An episode guide, promotional inserts and a Limited Edition Autobot Magnet are also tucked inside. It's not quite strong enough to stick to most cars securely, but at least your fridge will look more expensive.

Bonus Features
Disc 3 leads things off with "Triple Changer: From Toy To Comic To Screen" (19:53, below left), a retrospective featurette about the franchise's early days and lasting influence. Featured participants include executive producers Tom Griffin & Joe Bacal, comic writer Bob Budiansky and several current Transformers marketing reps, many of who grew up as fans of the franchise. It's disappointing that no voice actors participated in this behind-the-scenes piece, though a series of conceptual designs and promotional items can be seen along the way. This is a decent effort, all things considered, so here's hoping that Shout Factory has produced more featurettes for the remaining collections.

Also here are a few vintage extras, including a trio of Archival Hasbro Toy Commercials ("Optimus Prime & Megatron","Insecticons & Dinobots" and "G2 Optimus Prime", 1:31 total). These appear to be identical---or at least similar---to those hidden on Transformers: The Movie's 20th Anniversary release, complete with blurred-out faces. They're in rough shape (especially the second), but die-hard fans will enjoy seeing these again. Also here is a Public Service Announcement entitled "Bumblebee: Running Away From Home" (0:31, below right), in which our yellow friend turns a young boy's life around in mere seconds. Children of the 1980s will undoubtedly remember these "Knowing is Half the Battle!" spots, while younger folks weaned on Fenslerfilm spoofs will appreciate seeing the source material.

Closing things out is a Printable "Transport To Oblivion" Script, accessible via your computer's DVD-ROM drive. All bonus features are presented in anamorphic 1.78:1 and standard 1.33:1 format---and like the episodes themselves, do not include optional subtitles or Closed Captions. While more vintage materials---or even a featurette on the series' restoration for this DVD collection---would've been appreciated, Shout Factory may have a few more tricks up its sleeve for future collections. For now, fans will enjoy digging through this light but enjoyable platter of extras. 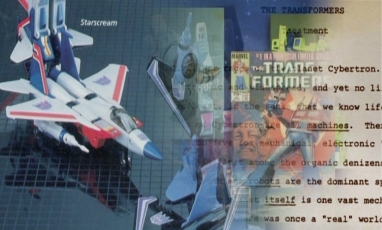 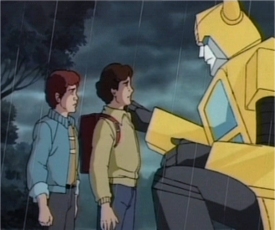 Purists will enjoy what Shout Factory has done with Transformers: Season One, from the "broadcast format" episode presentations to the tastefully-remastered audio mix. These episodes are fairly enjoyable on their own terms, whether you're new to Generation 1 or seeing these through nostalgic eyes. Our stories often take a backseat to the series' commercially-minded intentions, but it's not hard to get lost in some of the far-fetched magic. Though Shout Factory's technical presentation is the real selling point here, the new bonus features, low retail price and sleek packaging offer an added incentive for those on the fence. Overall, fans of all ages will find this 25th Anniversary Edition of Transformers: The Complete First Season hard to resist. Firmly Recommended.

Randy Miller III is an affable office monkey based in Harrisburg, PA. He also does freelance graphic design projects and works in a local gallery. When he's not doing that, he enjoys slacking off, juggling knives and writing things in third person.