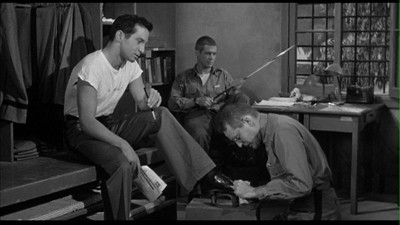 How Ben Gazzara didn't become a huge star after The Strange One, I'll never know. Sure, he has been a respected actor and starred in a variety of films for the last fifty years, some good and some bad, but based on the awesome talent displayed in his 1957 debut, critics and audiences alike should have been trampling over each other to praise him. He is handsome, charismatic, and positively chilling as the cold, calculating bully Jocko DeParis, a Cadet Sergeant at a military school in the American South. It's one of the most psychologically compelling performances of the 1950s, a triumph of method acting that doesn't let the method show. So how is it I am only hearing about it just now?

The Strange One was a film put together entirely by the famed Actor's Studio in New York. It was directed by Jack Garfein, who apparently only went on to direct one more picture, an even stranger sounding number called Something Wild. Here he was working with a screenplay by Calder Willingham, who went on to write the movie Paths of Glory and the novel Rambling Rose. Willingham was adapting his own novel and play, originally titled End as a Man, which makes more sense as a name for the story. Think about it too much, and you might hurt your head trying to sort out which of the many strange ones is the particular One they mean, and somewhat ironically, the odd title serves to highlight even further the homosexual undertones that exist in this all-male story. According to the marketing copy, this movie's suggestions of male love were censored on its original release, all of which is restored for this DVD. Call a movie that, and my gadar goes wild!

Gazzara's Jocko is a fourth-year student at the school, and one known for his gruff treatment of cadets under him. As it turns out, the year before he was busted for being overly harsh with George Avery (Geoffrey Horne), son of Major Avery (Larry Gates), one of the school's top brass. This is the impetus for the elaborate scheme Jocko hatches at the start of The Strange One, forcing two freshman (George Peppard, also in his debut role, and the mole-like Arthur Storch) to host a drunken card game where they'll help Jocko and his main accomplice (character actor Pat Hingle) fleece a punchy football player (James Olson). When George tries to stop them, Jocko and the baller beat the living hell out of him, pump whiskey into his stomach, and leave him in the yard to be found the next morning.

The rest of The Strange One follows the guilty men as they wrestle with what to do. Jocko remains resolute and manipulative, giving each of his unwitting henchmen a reason not to rat. All of them are likely to be expelled for their part in all of the evening's activities, and so protecting their skin is priority one. It's fascinating how none of these characters are really noble, and quite a few of them are downright unlikable. As Simmons, Arthur Storch (I couldn't verify if he is related to Larry) gets the worst of the hazing, but he's also a genuine creep, a pathological liar who needles his roommate about his hypocrisy but is so uptight himself, he refuses to shower because he has to share the facilities with other students. Peppard's Cadet Robert Marquales is the closest to being honorable. He is the pragmatist with the conscience. He sees the sense of keeping his mouth shut, but his sense of decency won't let him be. 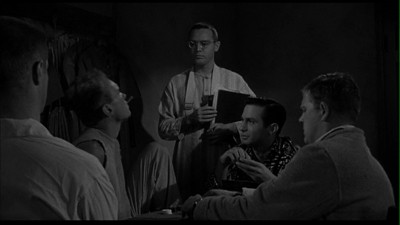 I am not sure exactly what was censored from The Strange One in 1957, I can find no specific information--though apparently the movie was sunk more by producer Sam Spiegel's bruised ego and his taking the final edit out of Garfein's hands more than it was its salacious content. In addition to the homoerotic elements, there was also some scandal about Jocko hiring a hooker (Julie Wilson) to try and bribe Simmons with her wares. There is no real question about the girl's profession in this cut, nor is there any ambiguity about what the hungry-eyed Perrin, nicknamed Cockroach, is really after. In his only screen performance, actor Paul E. Richards plays Cockroach as a greasy, nervous, and calculating predator, his Southern drawl dripping with lust every time he talks to Jocko. Even if you don't catch Jocko calling him a "three-dollar bill," the sexual tension in the scene they have alone in Jocko's room, or Cockroach's trying to convince him not to go out with the girl, should erase most of the mystery. It's a potent subplot, and well handled for the time, especially under Production Code restrictions. Sure, it's not a positive portrayal, but the pathology makes sense given the setting and circumstances.

The Strange One is definitely Gazzara's movie, however, he commands every frame of it. He's like a tiger the way he goes after the other actors, and yet completely aware of the contradictions that exist in such an individual. The writing is solid, but some of the turns Jocko takes in the final act could have easily been cheapened by obvious acting. Gazzara gets how to make the changes work, and he moves through the logical steps to take the character from one emotional state to the next. Willingham also gives him a lot of great dialogue, and the actor never chokes on it, no matter how big the mouthful. All of the parts are written with distinctive voices, making the characters distinctive for more than just the faces of the performers.

Really, for a bunch of rookies, the folks behind The Strange One have made a smart, confident movie. Jack Garfein's directorial style isn't very showy, but it is steady, and he understands how to command the frame and how to stage the on-screen actions for dramatic effect. Sure, there are a lot of straight-ahead shots, but that makes sense given he was coming from the Actor's Studio background. (He, along with most of the cast, staged the first-run play). He also has the kind of respect for the script and for the actors one might normally find in a stage production, and that's not a bad thing. The creative atmosphere clearly clicked in all the right ways, and from this collaboration sprang an intelligent, tightly wound drama that portrayed a dark incident and the enclosed society in which it happened with gritty realism and gutter poetry. 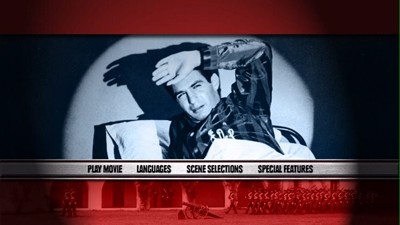 Video:
IMDB lists the aspect ratio for The Strange One as 1.37:1, and Columbia touts this DVD release as being 1.85:1. I am not sure where the discrepancy is, but the anamorphic transfer looks good in terms of framing, I didn't detect any stretching or suggestions of seeing an image as anything other than what was intended; it's possible IMDB is wrong.

The black-and-white image is fairly good. There was hardly anything by way of dirt and scratches, and though I saw the occasional case of a scene with fuzzy resolution or some splotchy backgrounds, nothing persistent.

Sound:
A very good mono mix in Dolby preserves the original English soundtrack. The tones are clear, and there is no detectable hiss or errors.

There are subtitles available in English, as well as French. There is also a French audio option.

Extras:
The only film-specific extra is a 10-and-a-half minute interview with Ben Gazzara in which the actor looks back at the film. The new piece begins with his early acting life and the events that lead to his joining the Actor's Studio and being a part of this film. In a short time, he gives a lot of great trivia (James Dean tried to steal his part!). His explanation of his take on Jocko illustrates what an insightful actor he was, and his stories about the conflict between director and producer shed some light on where things went wrong.

The DVD also has a handful of trailers for other Columbia discs.

FINAL THOUGHTS:
The Strange One is a film unfairly lost to time. A victim of censorship and petty studio machinations, this production of the New York Actor's Studio is an involving drama about hazing in a military school. Ben Gazzara shines in his film debut, playing the sociopathic bully that tries to bend his fellow cadets to his every whim. Working from a script by Calder Willingham, this talented group of artists pulled off an exceptional film, one that more should see now that it's out on DVD in its uncut form. Highly Recommended. 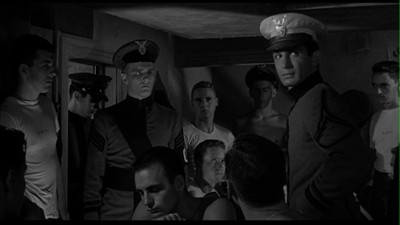