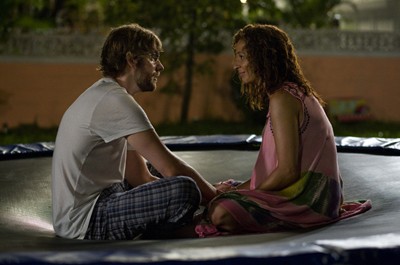 After helming last year's weighty emotional drama Revolutionary Road, no one can really blame director Sam Mendes for wanting to tackle something a tad bit lighter. For his fifth theatrical feature, Mendes has chosen to make an indie road comedy. Away We Go is the story of two intelligent people facing the life-changing experience of having a baby and the journey they take to find out just how extensive that change will be.

Burt Farlander (John Krasinski of The Office) is an insurance salesman content with the little things, while his significant other Verona (SNL's Maya Rudolph) is an illustrator who paints detailed portraits of injuries (though we never know why or for whom). In their early thirties, they aren't married, mainly because Verona doesn't want to be, but they are soon to have a baby together. It's an unexpected development that has sent them off course to a degree, but nothing they can't handle. That is, until they are further surprised to discover that Burt's parents (Catherine O'Hara and Jeff Daniels, both of whom are wonderful and hilariously droll) are going to be moving to Belgium for two years. Since Verona's parents have passed away, this leaves them without a support system and no reason to be living where they currently live. Verona proposes a cross-country trip to check out a few places and explore their options.

So begins the odyssey of the Farlanders. Yes, the name is an erudite pun, pronounced far-len-der so you don't even realize the gag until you see it on paper. They begin in Arizona, where Verona's sister and former boss live. The boss is Lily (Alison Janney), and she has a husband named Lowell (Jim Gaffigan) and two kids. Lily is loud, drunk, and shamelessly dissatisfied, while Lowell is subdued, drunk, and angrily dissatisfied. Their outbursts of malaise and expressions of suburban rage are funny, largely due to two spot-on performances by surprisingly compatible actors, and they also set the tone for the parade of freaks that Burt and Verona are visiting. Each will teach a lesson on what life could be like once they become parents. They range from the happy family made up of adopted children to Burt's brother (Paul Schneider, All the Real Girls), whose wife has just left him and his young daughter to fend for themselves. We also get everything in between.

Some of these encounters work, and some of them don't, and the uneven results sometimes make Away We Go a maddening experience. The script is written by real-life husband and wife Dave Eggers and Vendela Vida, celebrated novelists and active members of Eggers' McSweeney's publishing concerns and all that entails. I have a kind of love-hate relationship with that part of the literary world, and much of what I hate is the preciousness and sense of smug cleverness that is woven into a lot of the work that comes out of it. These things are a big problem with Away We Go, a film that would like us to believe that the foibles of its main characters make the judgmental way they look at the rest of America forgivable. There is a fine line in comedy, no matter how understated or darkly real, to making us sympathetic to protagonists who are the only sane ones in an insane world rather than thinking they are schmucks, too. Away We Go pulls it off most of the time, but fails miserably in others. 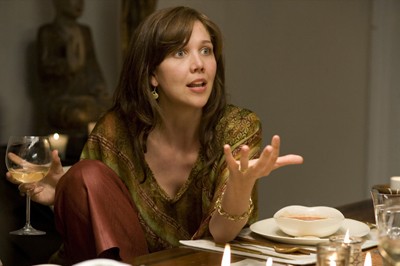 The lowest of the low is Burt's childhood friend, LN (Maggie Gyllenhaal), a new-agey college professor whose unique parenting theories put a heavy strain on the suspension of disbelief. Maggie Gyllenhaal is marvelous, she always is, but she is also in the wrong movie. The broad material she is given takes the earthy comedy away from its satirical foundation and almost into slapstick. While the scene does provide a cathartic turning point for Burt, it otherwise tilts so far to look down its nose at everything, the movie almost loses its equilibrium and just about tips over.

It's a surprising stumble for Sam Mendes, a director whose work has grown increasingly human since his biting debut, American Beauty. The best scenes in Away We Go are when the camera pulls away from the sideshow and settles on the reality, letting the characters just be themselves. (Mendes' usual virtuoso visuals are dialed down in this picture, and smartly so.) Moments between Burt and Verona, or Verona and her sister (Carmen Ejogo), or Burt and his brother--here the filmmakers drop the brainy yucks and let their hearts lead the way, and it works wonderfully. John Krasinski, looking awful in his scruffy beard, is sweet and fun, giving Burt a boyish charm without making him seem like an overgrown child. Maya Rudolph, who is known mainly for her whacked-out characters on SNL, goes in the opposite direction as Verona. Her voice is soothing, and her overall manner translating into one of the more serene presences you're likely to find on a movie screen. I kind of wish she'd be my mother.

The relationship between these two is what keeps Away We Go chugging forward, and their genuine chemistry and honest approach gives the final lessons and the film's resolution real weight. I was pulling for them to make it by the end of the movie, despite not having been sure at the start. Ironically, it's that confrontation with Gyllenhaal and her pretentious husband (Josh Hamilton) that provides the fulcrum. Burt, Verona, and I, we all got it together in unison.