Education of Charlie Banks, The 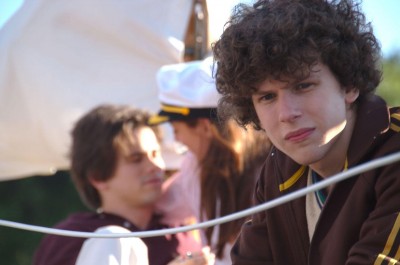 Last year, Limp Bizkit front man Fred Durst made his theatrical "debut" as a director with "The Longshots," a formulaic family film with Ice Cube that failed to light up the box office or showcase Durst as an original artist with something worthwhile to communicate. In actuality, "The Education of Charlie Banks" is Durst's introductory feature, shot three years ago and only seeing the light of day now. "Banks" is a coarse period film, more in tune with the psychologically cracked point of view that informed much of Durst's tedious music career. I'm not convinced the man who gave the world "Chocolate Starfish and the Hot Dog Flavored Water" deserves a directing career, but "Banks" showcases a tinge more focus and passion than "The Longshots" bothered to reveal, even though it's the lesser movie.

When Charlie Banks (Jesse Eisenberg) was a child, nobody cast a darker neighborhood light than Mick (Jason Ritter). A loner and bruiser, Mick spoke with his fists, culminating in the near-death beating of two jocks at a party. Unsure of himself, Charlie refuses to testify against Mick, instead leaving the matter behind, eventually heading off to an idyllic college experience, and even taking an unobtainable object of affection in Mary (Eva Amurri). Years later, when Mick shows up on campus to visit Charlie and pal Danny (Chris Marquette), his presence shakes up the docile young man. During the course of his stay, Charlie unearths even bleaker layers to Mick's self-destructive personality, eventually finding conflict he's unable to sort out with simple reason.

With "Banks," Durst is testing out his comfort with mellow cinematic moods. Envisioned by screenwriter Peter Elkoff as '70's character piece, "Banks" doesn't always rely on a futile mist of nostalgia, but Durst clearly holds fondness for the slow burn techniques of the era. The filmmaker gradually pushes the drama into focus through extended sequences of roundtable conversation and spatial tension, allowing the viewer to process the threat on a growing level of unease and realism. It's a praiseworthy objective for Durst to take on (channeling his '70's directorial gods), but it doesn't always pay off with the proper voltage. Scenes often drone on longer than they should, lingering on bits of exposition and painful actorly indication long enough to neuter the intention of the writing. Durst doesn't show much control, though he induces a comfortable collegiate environment to backdrop Mick's invasive reptilian presence, along with displaying affection for showy one-take camera moves.

While "Banks" hints at a standard thriller mode with Mick slowly swallowing Charlie's life at college, Elkoff aims more for a young adult novel vibe, examining issues of social class (and the cruelty within), romantic dejection, and the nature of evil while tending to the growing unrest between the characters. Again, Durst is taking the leisurely path here, glacially unfurling the drama. In fact, the impetus behind Mick's appearance on campus occurs at the 80 minute mark, leaving only 15 minutes to summon a satisfying conclusion to the story. Of course, it would help to have someone else leading the charge instead of Eisenberg, who displays his one and only speed: pubescent hummingbird. His predicable skittish acting wears out the feature quickly, along with Ritter's moderately ridiculous take on goombah Mick and his ill-defined rage issues.

The anamorphic widescreen image (2.35:1 aspect ratio, incorrectly labeled 1.78:1 on the box art) on the "Banks" DVD retains the purposeful haze used by the cinematography to communicate a '70's feel. Skintones run very pink and colors in general are limited. It's not enough to cripple the viewing experience, but the curious visual scheme and its halfhearted DVD reproduction is noticed. Black levels still retain an ideal crisp quality.

The 5.1 Dolby Digital sound mix on the DVD creates a smooth ambiance of soft-rock tunes and campus atmospherics, but rarely does the soundtrack urge itself aggressively over the listener. Dialogue is separated proficiently from the music cues and bursts of violence. A simple and successful mix.

A feature-length audio commentary from director Fred Durst and actor Jason Ritter tests patience to an absurd degree. While I enjoyed hearing the duo discuss production challenges, most of the talk here is devoted to restating the obvious, either through numbing play-by-play observation or underlined character motivation. Ritter attempts to mix up the track with questions and explanation, and while I give him credit for his enthusiasm, the commentary is a bore.

"Conversations Behind 'The Education of Charlie Banks'" (23:51) interviews cast and crew for their thoughts on the film's thematic reach and Durst's directorial abilities. The information here is mostly repeated from the commentary. While it's always fun to see actors in motion, what they have to say fails to enlighten.

I suppose the refusal of "Banks" to pursue a familiar note of suspense is admirable. However, Durst fumbles the psychological promise through crude filmmaking skills and an unforgivably slack pace. "The Education of Charlie Banks" would've made a swell student film for Durst, a safe haven for the rocker to work out his film school inclinations. As a feature-length requiem for the disturbed soul, this picture is woefully ineffective.