Other // Unrated // Region 0
List Price: $19.95 [Buy now and save at Blogspot]
Review by Stuart Galbraith IV | posted June 13, 2009 | E-mail the Author
Another imaginatively packaged, beautifully-transferred, and crammed-with-extras set, The Complete Steve Canyon on TV Volume 2 covers roughly the middle-third of Steve Canyon's one-season run on NBC during the 1958-59 season, with 12 episodes, numbers 13-24, included here. It was during this time that show was pretty much forced into a needless format change that probably killed its chances for long-term success, and it went from being an unusual, exceptionally good show to an okay but much more ordinary one. Nevertheless the program, adapted from Milton Caniff's 1947-1988 comic strip, still has plenty to offer, especially as restored and revived on these lovingly packaged DVDs. 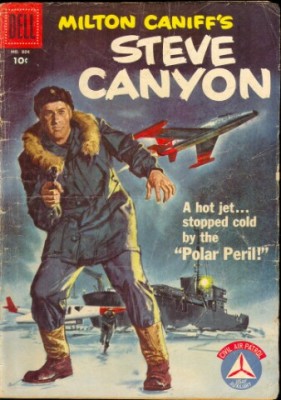 Lt. Colonel Steve Canyon (lean Dean Fredericks, who resembles Caniff's drawings quite closely) is an experienced jet pilot with the Right Stuff. During the first half of Steve Canyon's single season, the U.S. Air Force was eager to cooperate with the show's producers, figuring Caniff's idealized airman would encourage enlistment and good will about that branch of the Armed Forces. They provided the show's producers a level of access to real hardware and military footage unprecedented for a television series.

Early on, Canyon was on assignment all over the world, often testing of some fantastic - but genuine - Atomic-Age hardware. The mixture of carefully edited stock footage with Fredericks and various guest stars interacting with the real hardware (or on carefully recreated sets) was both very convincing and visually impressive, even amazing at times.

However, the Air Force brass took strong exception to the show's fact-based scripts, which depicted the pilots (other than Canyon) as something less than Greek Gods, and the pricey hardware they flew as considerably less than infallible. The Air Force just didn't get it: they thought the show was criticizing the service's weaknesses when in fact it was dramatizing its main strength - the ability of well-trained but ordinary men to overcome the extreme hazards of brand-new, often untested technologies through perseverance, ingenuity, and a whole lot of bravery.

The Complete Steve Canyon on TV Volume 2 starts out with three episodes obviously produced before the Air Force pulled the plug. "Operation Crash Landing," for instance, is a strong episode with Canyon flying a B-52 from Brazil back to the States. En route one of the crewmembers becomes seriously ill with highly contagious meningitis, leaving Steve with precious few options when the bomber's landing gear won't deploy properly. The program, like almost all the early shows, has a real air of authenticity and the drama is palpable. The first three shows of this set have the same verisimilitude.

A Christmas-themed show originally aired that December 20th, "The Gift," features a teleplay by Ray Bradbury, no less. The story, with Steve on Christmas Eve airlifting Eastern European children displaced by the Cold War to families in the west, doesn't quite work in the end but it's a valiant effort, but it's very much in the style of Bradbury's prose and almost very touching.

From here, the format changes abruptly. Instead of Canyon flying solo (as it were), freely moving from assignment to assignment all over the world, he suddenly takes command of Big Thunder, a fictitious air base apparently based on Edwards AFB in the Antelope Valley north of Los Angeles. New regular characters are introduced, notably Maj. "Willie" Williston (Jerry Paris), Sergeant Berger (Bob Hoy), and Airman Abel Featherstone (Abel Fernandez), a Native American.

At this point, the show really turns a corner; it's like the Air Force took away all their toys. Instead of scenes around and aboard real aircraft, they must make do with flimsy-looking plywood props representing jet fighters: usually the nose or the tail, with the rest of the plane obscured by a big boulder or enormous bush. There's also much less interesting generic stock shots, a sharp contrast to the rare, fascinating stuff early in the show's run. In an effort to salvage what they could, the show even began recycling footage originally used early in the season: "The Search" borrows helicopter footage shot for "Pilot Error," and "Strike Force" appears to use the same stock mid-air refueling stock shots as "Fear of Flying."

The show looks cheap in other ways: the Big Thunder interior sets are utterly colorless and, presumably because the Air Force was no longer cooperating, the show tends to stay indoors, or on the Universal backlot. More significantly, it veers wildly away from the authenticity and intentions of the early episodes and, occasionally, into the realm of cheap melodrama, further straining credibility. "The Search's" dénouement, for instance, has guest star Jeanette Nolan delivering a marathon monologue about her supposedly unfaithful husband, the paranoid ravings of a lonely woman having a breakdown. Nolan acts up a storm but what does this have to do with Steve Canyon? In another show, bank robbers kidnap Canyon and Williston.

Most of the shows feature teleplays by Sidney Carroll, though this collection includes scripts by Bradbury, William Spier, and Charles Beaumont, among others. Lamont Johnson, Don Taylor, and Walter Grauman directed.

The Complete Steve Canyon on TV - Volume 2 is presented region-free in its original full frame format, on two single-sided, dual-layered, region-free discs. The black and white episodes look just great, like they were mastered straight off the original 35mm camera negative. Detail is superb and the contrast excellent. Though the series originally aired on NBC, some of the episodes have been sourced from ABC masters, where the show aired in reruns for a time (along with many other NBC shows). The audio is excellent; Walter Schumann's (Dragnet) memorable theme music sounds particularly strong.

What's great about this is that not only do we get the show, but for most episodes also all the NBC or ABC network material used during the commercial breaks. Not only are there the usual cigarette commercials and the like (notably Chesterfield Kings and Oasis, which must have appealed to "cultured" types), but also promos for myriad ABC shows (and NBC reruns). Fredericks also appears in promos for Chesterfield, and the Christmas show is especially hilarious for its promotion of gift-wrapped cartons of cigarettes (makes the ideal gift!).

The DVD box art is reversible; inside is an attractive full-color portrait of Steve Canyon drawn by Caniff, as well as a detailed episode guide noting director, writer, airdates, cast, a capsule summary of the plot and each episode's extra features.

Though there's a notable dip in quality, the "fun quotient" of Steve Canyon and the very high quality of the restoration and DVD presentation remains undiminished. Steve Canyon isn't a lost classic but it's well above average and if you've stuck with the series this far you'll want to continue watching it all the way to the end. A DVD Talk's Collector Series title.