Diary of a Suicide 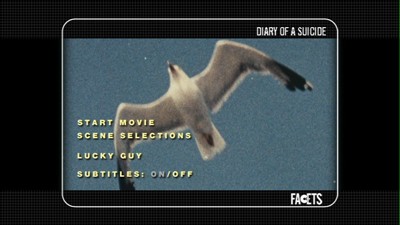 I'm going to be up front with you. I really don't want to spend much time on this review. Faced with spending another hour or more gathering my thoughts on a movie that already bored me for 82 minutes is not my idea of a good time. I feel like I am getting out of prison for a crime I did not commit...but only after I complete a written test to prove that I was actually in jail for the full sentence. I swear, I sat through the whole thing!

Diary of a Suicide is a 1972 French film from writer/director Stanislav Stanojevic. If they give out awards to copywriters who write the back cover blurbs on DVDs, the scribe that put together the piece on this film should win it this year, because it was based solely on his or her description that I decided to take this disc for review. How that person managed to make this thoroughly uninteresting movie sound good is beyond me. I feel silly even trying to summarize what went on in the flick, because it feels less like a single narrative and more like a bunch of short experimental films tied together with an afterthought framing device. I like that they dug up a blurb from Francois Truffaut where the legendary filmmaker praises Stanojevic's own synopsis and treatment for Diary of a Suicide. No quote from him on the final film, mind you, just on the outline. I wonder, did the same thing that happened to me happen to Truffaut?

On a cruise around the Mediterranean, the boat's tour guide (Sami Frey, Band of Outsiders) is making obnoxious advances on the trip's interpreter (Delphine Seyrig, Last Year at Marienbad), an aloof woman who refuses to remove her sunglasses. He wants her to stop repeating the things he says and start sharing more original conversation with him, and after several nights of putting up with his come-ons, she relents by asking him to tell her "something beautiful." At first, he tells her short anecdotes of personal anguish and death, each shown as their own segments, and when that is not enough, he finally begins to tell her a story about himself. This flashback gives way to further flashbacks, like Russian dolls, a story within a story. The most substantial is a tale of anarchists who scheme to blow up a politician, his family, and themselves. They are mostly successful, but the female terrorist (Marie-France Pisier, The Phantom of Liberty) fails at killing herself and ends up jailed, denied the death penalty she yearns for. She is watched 24-7 by a deranged jailer (Sacha Pitoëff, Marienbad, Donkey Skin) who, after being injured in a war, lost his memory and his need for sleep.

The jailer's account of his dangerous battle is the deepest we go into this cavern of story, and his yarn is also one of the most poetically meaningless of all the futile events related in the various narratives. He is part of a line of soldiers being sent into battle one by one, no one realizing that the moment they turn the corner out of sight, they are bonked on the head with an axe, never actually reaching the real fight. His story is also one of only two sequences in full color, alongside a visit to a gruesome mausoleum and the occasional snapshot within the main story. All of the other flashbacks have single-color tints, like a silent film, and the stuff on the boat with the guide and the translator is in black-and-white. Is there are reason for this other than "because we can"? You've got me. I am not sure there is a reason for any of Diary of a Suicide except the fact that they could. They had cameras, they had money, they had actors--why not make a movie? Let others worry about it if it's worth watching.

I like pretentious movies. I like slow movies. I like all kinds of movies that are arty farty and up their own butts that get me labeled as pretentious, arty farty, and up my own butt for being a fan. So, when you're too much of all these things even for me, you've really blown it. I only saw the most tenuous of connections between all of these various stories, and I'm not sure Stanislav Stanojevic saw much to connect them either. After the story of the anarchist and the jailer--a segment of the film that actually had a lot of potential, and where the actors actually had something to do and did their best to do it well--ends without a clear resolution, the interpreter asks the guide for more info. He not only tells her he doesn't know more, but he gets angry at her for asking. Methinks the writer doth protest too much. What a cheat! Forced ambiguity is as big of a cop-out as, "It was all a dream."

By the time we finally discover why the interpreter wears sunglasses, after so many long, languorous scenes of Delphine Seyrig standing around (did they only have her for an afternoon or something?), the revelation seems like not very much at all, like waiting for a flower to bloom and at the last second, someone steals the real flower and sticks a plastic one in the ground in its stead. Her affliction is meant to remind us of one of the characters within the guide's story within a story within a story, but the explanation for that character's deformity was that it allowed him to see better with what he had left. If this is so, then wouldn't the interpreter be the one who understands rather than the one asking questions? In the kingdom of the blind, would she not be Queen? 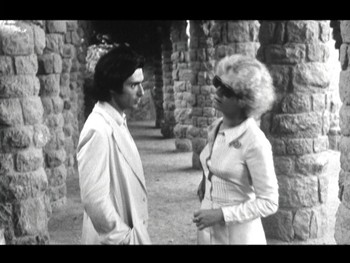 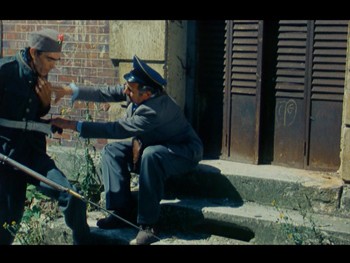 Video:
The anamorphic transfer for Diary of a Suicide is presented at full frame, though its aspect ratio is slightly wider than old tube televisions. The image is about average in terms of detail, though there is a lot of surface scratching and also quite a bit of interlacing.

Sound:
A basic no-frills mix of the original French soundtrack is clear and sharp, with a nice volume balance and no extraneous hiss or noise. The optional English subtitles are white and well done.

Extras:
"Lucky Guy" is a low-budget, hour-long interview with writer/director Stanislav Stanojevic, recorded in English. In it, he talks about his career and this film. It's mildly interesting, maybe more so than the main feature, and obviously will increase in entertainment value if you actually liked Diary of a Suicide.

FINAL THOUGHTS:
Skip It. Despite one intriguing kernel of a story amongst the collection of strung-together tales that is Diary of a Suicide, I can't at all recommend this picture. Even at its short running time, Stanislav Stanojevic's narrative of ennui and self-pity is overlong. Languidly paced, disconnected, it's like the shards from the broken window of a movie, put together with only the pieces that weren't shattered beyond repair. Unfortunately, it appears that all the important stuff is what got ground to powder. Delphine Seyrig and Sami Frey really have nothing to do, the director does nothing to sew his stray threads together, and thus there is no reason for you to even bother. 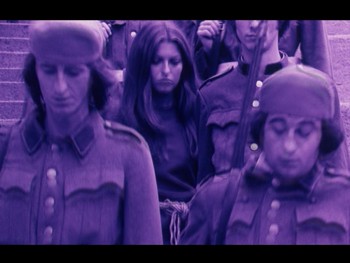 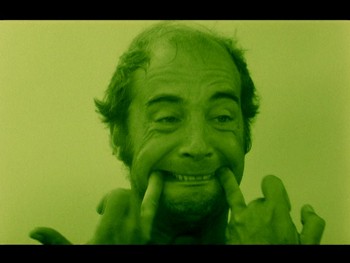