Acorn Media // Unrated // July 7, 2009
List Price: $49.99 [Buy now and save at Amazon]
Review by Stuart Galbraith IV | posted June 30, 2009 | E-mail the Author
Two relatively new Poirot TV-movies, along with a good series retrospective, come to DVD in Agatha Christie's Poirot - The Movie Collection - Set 4. The set includes Mrs. McGinty's Dead and A Cat Among the Pigeons (both premiered in the United Kingdom in September 2008), along with a 47-minute episode of Super Sleuths featuring interviews with the show's cast, including not just star David Suchet, but also Hugh Fraser, Philip Jackson, and Pauline Moran, who've been absent from the series since 2002.

Acorn Media's set isn't cheap - at $49.99 (SRP), that's expensive for two 90-minute mysteries and a documentary - but the good news is that the movies are uncut and in their proper 16:9 enhanced widescreen aspect ratios, which was not the case with some of the earlier Poirot movies released by competitor A&E. (Just how the series ended up getting licensed to two entirely different American entities, each simultaneously - and very confusingly - releasing and reissuing similarly-packaged DVDs for the last decade is a mystery Poirot himself would have a tough time solving.) 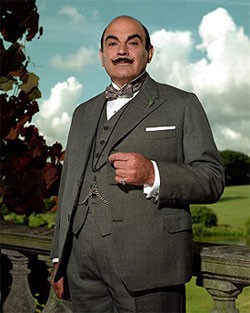 Mrs. McGinty's Dead (technically, Agatha Christie: Poirot - Mrs. McGinty's Dead), like most of the recent TV movies is a very faithful adaptation of Christie's story. Both shows are co-productions between ITV Studios, Ltd. in Britain and WGBH Boston in America, but Agatha Christie, Ltd. and the estate is also involved with the production, and both they and star David Suchet have pressed for extreme fidelity to the original work. Intriguingly, one of the major differences seems to be that while Christie's Poirot stories became lighter in later years (not counting the very dark last one), the TV Poirot has toned down much of the humor - the difference in Suchet's performance between the original hour-long episodes and this is striking.

The novel (also known as Blood Will Tell) was first published in 1952. Mrs. McGinty is a lowly charwoman apparently murdered by a young lodger for the £30 she kept hidden under her floorboards. The lodger, James Bentley (Joe Absolom) is tried, convicted, and sentenced to hang but even the police superintendent on the case (Richard Hope) thinks him innocent, and asks Belgian detective Hercule Poirot (Suchet) to look into the case.

He travels to the rustic small village where the woman is murdered - and where Poirot is quite appalled by the primitive, unsanitary kitchen and tasteless cuisine.

Early in the story, Poirot determines that Mrs. McGinty had clipped out a newspaper speculating on the whereabouts of two women involved in notorious murders some years before. (This is simplified from the novel, in which four women were profiled.) Poirot deduces that in her charlady duties Mrs. McGinty must have recognized someone in the village as one of the two profiled women.

The recent Poirot movies of recent years have been hit-and-miss. Without fail Suchet's performance wins out in the end and even the worst of the TV movies have been worthwhile. Mrs. McGinty's Dead, alas, is one of the weakest entries to date. One thing almost all the weaker shows have in common is overly flashy direction that does little but draw attention to itself and away from the mystery at hand. That's the case here: director Ashley Pierce and his cinematographer like unusual, probing angles to a fault. Poirot, for instance, gets a big introduction: he's first seen from behind, the camera slowly tracking in toward the back of his head, followed by extreme tight shots of his famous mustache, etc., all apparently to build suspense. Indeed, there's far too many shots of people's backs in this, as well as extreme high and low angle shots, and in the process Pierce often cuts away from vitally needed close-ups of Poirot and the suspects as he's interviewing them.

I also quite disliked the extravagantly overdone "hot" look of the show, with a fuzzy, halo-like effect it creates around people and objects: candles, light coming through windows, etc. It gives the show a Vaselined-over effect and must have looked especially bad in high-definition. On the plus side, the production touts an impressive, moody score with an obviously large orchestra.

If Mrs. McGinty's Dead is one of the worst of the recent Poirot TV movies, A Cat Among the Pigeons is one of the best. It's all in the telling: smartly directed by James Kent from an adaptation by acclaimed (and prolific) actor-writer Mark Gatiss, A Cat Among the Pigeons is everything Mrs. McGinty's Dead ain't: involving, suspenseful, amusing. Despite myriad red herrings and Byzantine subplots, the show never leaves the audience in the dust - no matter how baffling the mystery, the relationships among the various characters remains clear when it's supposed to be, and the dénouement actually makes sense instead of leaving the audience passively, hopelessly confused. It also improves on the original 1959 novel, at least in terms of adapting it for film/television by bringing Poirot into the story much earlier.

In the TV adaptation, Poirot pays a visit to Miss Bulstrode (Harriet Walter), the headmistress and co-founder of the Meadowbank School for Girls. Bulstrode has decided to retire, and seeks Poirot's advice in choosing her successor. However, soon after his arrival, sadistic athletics teacher Miss Springer (Elizabeth Berrington) is found dead, impaled by a javelin in the gymnasium. Not long after one of the girls, young Princess Shaista (Amara Karan) of Ramat, the target of her country's revolutionaries, is apparently snatched from the school.

A Cat Among the Pigeons is practically perfect. The murders are vividly staged and, while hardly deserving of their fate, the victims are not exactly tragic figures. There's much good humor; one girl (Lois Edmett) enthusiastically joins the investigation, helps solve the mystery, and is delighted to learn that her apparently ordinary mother once worked for the Secret Service. One surprise I won't give away involves a character who's not at all what she appears to be; her sudden transformation startles the other characters and the audience.

Unlike Mrs. McGinty's Dead, A Cat Among the Pigeons is classically directed, in such a way that the direction enhances the excellent script without ever drawing attention to itself. Expository scenes are uncluttered with fancy camera moves and editing, while the murders and other scenes of suspense and fleeting horror are vivid and exciting.

Both movies, in 1.78:1 16:9 enhanced widescreen, are handsomely produced with what appears to be tight but adequate budgets. Mrs. McGinty's Dead looks soft, but that's for misguided aesthetic reasons described above, and otherwise both look fine, up to contemporary television standards. The Dolby Digital Stereo is impressive, with Stephen McKeon's fine scores coming off particularly well. The set gives each movie its own disc, with the 47-minute Super Sleuths show on yet another. It's a very good Extra Feature, including as it does interviews with the Poirot cast and behind-the-scenes personnel, who offering enlightening comments about the development of the show and its current direction, including hints about how Curtain, the final Poirot story, will eventually be adapted. Based on A Cat Among the Pigeons, I'd like to see Mark Gatiss take a crack at it.

Agatha Christie's Poirot - The Movie Collection Set 4 is overpriced and one of the two mysteries is a dud, but the set is still worth getting for the other adaptation, one of the best so far, and for the enjoyable, enlightening documentary. Recommended.