Trail of the Lonesome Pine, The 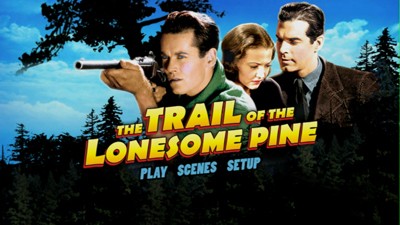 Henry Hathaway's The Trail of the Lonesome Pine is one of those movies that now survives due to its historical significance more than its ability to entertain. Made in 1936, it's a pretty mediocre movie, despite its excellent cast--Henry Fonda, Fred MacMurray, and Sylvia Sidney star, and Spanky McFarland from "Our Gang" is one of the supporting players. As melodramas go, Lonesome Pine is predictable and limp, but as a technical achievement, it's still fairly grand. It's the first Paramount feature to be shot in Technicolor, and one of the first movies using the three-strip process to film outdoors. The cinematography of Robert C. Bruce and W. Howard Greene still has the power to impress. There are some gorgeous views of cloud-covered mountains and the misty valleys below. Unfortunately, while nature may stand the test of time, some stories do not.

The Trail of the Lonesome Pine is based on a novel by John Fox Jr., and this appears to be the fifth time it had been brought the screen. This version starred Henry Fonda as Dave Tolliver, the scrapping elder cousin of the Tolliver clan. The Tollivers are mountain people who have been mixing it up with the neighboring Falin family for generations, a feud that goes back so far, its origins are lost. No one rightly cares, though, the battle is now just part of their everyday DNA. Dave was recently wounded in a shootout with the Falins, and the injury has gotten infected and turned gangrenous. This would have been fatal were it not for the sudden intervention of Jack Hale (MacMurray), a railroad man looking to buy the Tolliver land to get at their coal reserves. The city boy saves Dave's arm, convinces his Uncle Judd (Fred Stone) to sign on with the company (making the bumpkins all rich in the process), and as if that weren't enough, steals the heart of June (Sidney), the pretty young cousin Dave was set to marry. What follows is a clash of city ways vs. country manners, as Jack convinces June and her little brother Buddie (played by Spanky) that education is worthwhile and goes about building his railroad. Naturally, he runs afoul of Dave's bruised ego, and then he runs afoul of the Falins, and Jack quickly stops decrying the barbarous ways of fightin' hill folk and nearly gives into the violence himself.

There are several dramatic twists in The Trail of the Lonesome Pine, but none that weren't done a million times before and a million times since. Try to imagine what the Falins could do to the Tollivers that would make the business-minded Jack want to pick up a gun and shoot somebody, and I bet you'll have figured out the third-act fulcrum. While I do realize this flick is pretty old, I would wager it was already a fairly hokey and manipulative tactic back then. Which is totally fine, a melodrama of this kind is often enjoyable for its predictability, one expects to have the emotional buttons pushed. The problem is that Hathaway's film is lacking in any real gumption. There is a lot of anger, but not much fire. Stern yet polite stares are the most common weapon of the warring factions, and though these do give way to fisticuffs, the melees are either painfully slow and off the mark (Fred MacMurray hits like a girl, y'all!) or sped up to the point of being comedic. Likewise, the love triangle is practically a non-starter. Outside of one kiss, there is a lot of avoidance followed by a lot of resignation and acceptance, but not much heat!

Henry Fonda does his best to be brooding and menacing as Dave, but it's a fairly one-note performance. The quality actor we know and love starts to shine through when Dave has to make his tough, transformative decision near the end, and there is enough of a gradual slide toward the change that it works; still, it's a bit late to save the rest. On the flipside, Silvia Sidney is absolutely adorable as June, giving the character a child-like demeanor that makes her totally crush-worthy. She indulges in silly pranks, and her fun-loving manner balances well with her innocent curiosity. The actress does all the heavy lifting in terms of the romance, and she would fare much better later the same year in Hitchcock's war-time love story Sabotage. Her likeability--alongside the performances of Spanky, Stone, and Beulah Bondi, all of whom form June's onscreen family--are the real reasons to stick through Lonesome Pine. The lead men may be stiffs, but the support cast has enough life in them to make up for it.

As an evening's diversion, The Trail of the Lonesome Pine isn't the worst you could do, just don't expect it to reveal any new hidden treasures. If you begin it by holding out hope that it will take a turn for the better, you're only going to end up disappointed, but if you just settle back and let it go about its business, you can at least enjoy the sights. 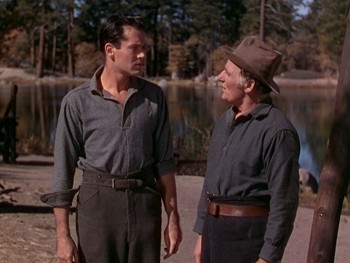 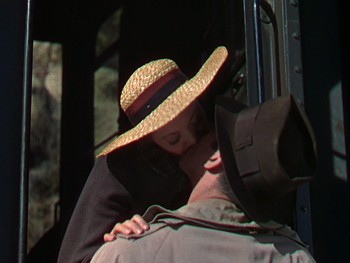 Video:
For such an old film, the 1.33:1 transfer is remarkably well preserved, not at all what you'd expect from a lower-tier DVD release. The Technicolor shows its age in that the colors aren't as solid as would eventually become the norm. The movie has an odd, almost painterly look. Interesting to note, too, that the opening and closing Paramount logos are in black-and-white, the studio hadn't even created color logos as of yet.

There is a little bit of print damage in a few of the scenes, some marks on the image, etc., but not much. There are also no problems with compression or interlacing.

Sound:
The Dolby 2.0 mono mix of the original soundtrack is also very good, not too extreme in the higher tones, clean and clear with only a little extraneous noise.

Subtitles are available in French, Spanish, and English SDH.

FINAL THOUGHTS:
The Trail of the Lonesome Pine is an early Technicolor achievement, but what it manages in terms of pretty visuals is hampered by what it lacks in script. Rent It for the photography and Sylvia Sidney, but don't let the film's age fool you into thinking it's a classic. 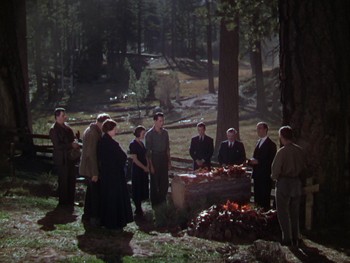 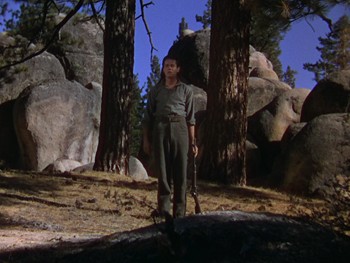