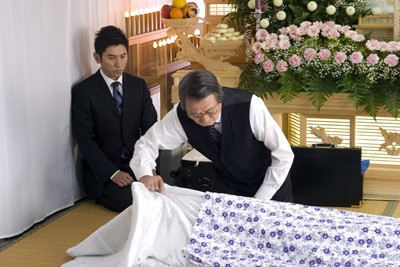 The Japanese film Departures was one of the few surprises at the Oscars this year, both for it taking victory from the more touted competition in the Best Foreign Language category and for the amusing speech given by its director, Yojiro Takita. Given the man's humorous thank you, one might assume that Departures is a light-hearted film, not a serious rumination on death and the afterlife. And yet, that is exactly what Departures is, proving once again that the greatest wisdom often comes from the comedians among us.

Masahiro Motoki (Rampo) stars as Daigo Kobayashi, a cello player whose dream to be part of a symphony orchestra ends when the group he's joined dissolves. Despondent and broke, he and his wife Mika (Ryoko Hirosue, Wasabi) move back to Daigo's hometown to live at the house his late mother has left him. Thinking he's answering an ad for a job at a travel agency, Daigo instead ends up applying to be the assistant for Sasaki (Tsutomu Yamazaki, Kagemusha), the owner of a company that specializes in ceremonies preparing the deceased for burial. The ad switched the word "departed" for "departures," hence the confusion.

Though Daigo is prepared to run from this job, Sasaki convinces him otherwise, believing fate has brought the young man to his door. Once he gets past his initial nervousness, Daigo ends up showing a natural aptitude for caring for the deceased. Even though many think "encoffination" is not a suitable occupation--Mika leaves him for a time, his childhood friend shuns him--it soon turns from a simple job to a new vocation. It is an art not unlike playing the cello, of finding the personal music in each ceremony. Sasaki's whole reason for getting into the business was to take care of the dead in ways others might not, to give the families one last chance to see their loved ones as they wish them to be. He lost his own wife nine years prior, and that loss has been his inspiration.

Considering this, it really does seem like fate that Daigo would land in this position. Though hardly out of his twenties, he has already experienced tremendous loss. His grandparents died when he was too young to realize it, and his mother passed away while he was out of the country. His father also left the family so long ago, Daigo can't remember his face. Until he goes on his first job with Sasaki, he hasn't even seen a dead body. Though death has affected his entire life, he's never had to face it. The closest he has gotten to it is having to sell his expensive cello. This makes Daigo's new job not just the means by which he'll settle his financial debts, but his emotional ones, as well. In learning to understand the dignity and meaning of others' final transitions, he will also finally understand how his own loss has changed him.

Yojiro Takita previously directed such unsubtle material as Onmyoji: The Yin Yang Master and screenwriter Kundo Koyama's most significant previous credit was writing banter for "Iron Chef," so it's another surprise that they can deal with such a heavy subject with such delicacy and gentle psychology. Departures isn't without its faults, it's sometimes heavy on convenience, including its melodramatic conclusion, but the sincerity of the writing and the understated performances manage to make those easy turns acceptable. There is very little by way of grand pronouncements in the dialogue, and there is even less in terms of the filmmaking. Takita indulges himself in a fancy shot here and there, but he saves it for times where it will have the most impact, such as looking down at Daigo from above when the young man is about to ascend to Sasaki's upper chamber. The heavy sense of portent is nicely juxtaposed with the quiet revelations that will soon follow.

That same respect and restraint may also be why Departures fails to get under the skin as much as it should. While it is definitely a good movie, it didn't really have the lasting resonance the topic deserves. I should have found myself more invested in Daigo's plight and more inclined to let my mind drift back to his catharsis once the movie was over. As it was, I enjoyed watching the often strange, often bemusing journey that leads to his opening up, but the reserved manner of the filmmaking meant I always stayed outside the experience. The fact that Departures isn't a tearjerker that resorts to melodrama doesn't necessarily mean it's any more meaningful, just less interactive. (And that is why I think Revanche or Waltz With Bashir should have taken the Oscar instead.)

Likewise, though we get to see Daigo become happy, we never actually get to see him be happy, Takita cuts to the credits before we get a chance to see any of the joy this change will bring. Then again, that may be by intention, as if to say that what we have seen in this film is the same kind of cleansing as Daigo and Sasaki bring to the deceased, getting them ready to go on their way but unable to follow. What happens next only they can know, we can only be left to imagine. When it comes to someone we care about, we are prodded to think about where they might have gone, but Departures is more like that acquaintance whose end touches us briefly, but then we move on.