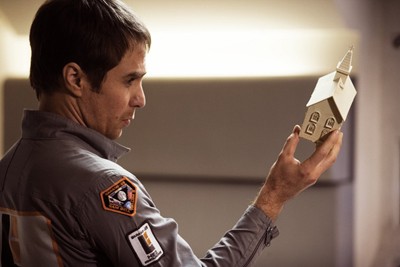 One of these days, Sam Rockwell, pow! To the Moon!

Or, you know, you can get there on a slow boat of movie magic.

Moon is the feature-length debut of Duncan Jones, son of a certain Davie Jones who is better known as David Bowie--a fact Jones the younger is probably tired of nerds like me thinking is cool. But I'm sorry, the offspring of Ziggy Stardust has made a haunting mystery story set on Earth's orbiting satellite, and that's just too rad. I guess the lunar lunacy runs in the family.

Rockwell plays Sam Bell, the lone attendant of a mining base harvesting moon rocks for their stored solar energy, which in an unspecified future has become the Earth's clean and efficient solution to our power problem. Sam is at the tail end of a three-year contract, and he's going a little crazy. Damage to a communication satellite makes direct communication with home impossible and so he must make do with recordings from his loved ones and the conversation with the station's helper computer, Gerty (voiced by Kevin Spacey). There are two weeks left in his tenure when Sam starts seeing things, visions of a girl whom he doesn't know and, of course, can't be there--because he's on the damn Moon! One such vision causes him to crash his land rover, and he wakes up to a new set of mysterious circumstances that leaves him doubting his sanity and the company who has sent him out there.

And that's only the beginning. I don't really want to say too much more about Moon's story, because the less you know, the better this movie will be the first time out. I went into the theatre expecting a typical man vs. machine vs. space madness plot, and while that is what Moon is to some extent, Jones' take on it has quite a bit more to it, and though it's not too hard to get a couple steps ahead of Sam once the mystery begins to unfold, that doesn't mean there aren't surprises to be hand. 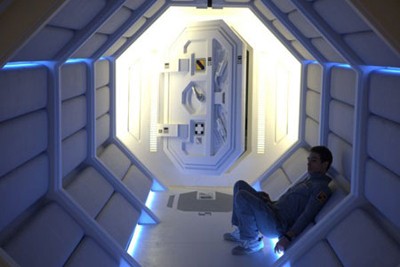 Moon is very much of that slow-paced space race school that began with 2001 and spawned both versions of Solaris and Danny Boyle's Sunshine. Jones isn't afraid to wear that influence on his sleeve. One of the final shots is reminiscent of the passing stars reflected on the helmet faceplate of Kubrick's astronaut, and Kevin Spacey's delivery for Gerty is blatantly borrowed from 2001's HAL (and, frankly, it's far more credible than Billy Crudup's imitation as Dr. Manhattan in Watchmen). The similarities pretty much end there, though, and unlike those other films, Jones locks his tale down on the planet rather than launching it up in a space station. The result is a dreamy, quiet visual style that plays up the muddied antiseptic of the lonely interiors and the eerie yet beautiful calm of the exterior.

Any actor who has to work with the entire galaxy as his backdrop is going to find it quite a challenge to make himself stand out, but Sam Rockwell is more than the performer for the job. Moon is almost quite literally his show. None of the other actors in the credits even get five minutes of screen time (well, except for Spacey, but you don't even see his face), so it's 90 minutes of Sam. The actor isn't just in every scene, he's in every scene with no one else in front of him. It's action without interaction, but Rockwell has enough personality quirks to keep the movie from ever getting boring. In fact, Moon is one of those movies that is impressive for its economy, especially when you realize how short it is. I left feeling like so much had happened, but without thinking it was either rushed or had overstayed its welcome. Jones even manages to throw in some humor, playing with internet smiley face icons for Gerty's interface, and balancing Clint Mansell's moody orchestration with ironic cues using '80s schlock (Nelson's "One and Only," Katrina & the Waves' "Walking on Sunshine").

So, yes, Sam Rockwell has gone to the Moon, and the end results are quite satisfying. Though it pales next to some of its more famous inspiration, it's one of the better thinkpiece sci-fi films I've seen in many a year. In a genre where the best movies come armed with surprises, Moon is a welcome surprise indeed.