MGM // PG // June 16, 2009
List Price: $29.99 [Buy now and save at Amazon]
Review by Stuart Galbraith IV | posted July 7, 2009 | E-mail the Author
A Johnny-come-lately spoof of Star Wars and assorted other sci-fi films and TV shows, Mel Brooks' Spaceballs (1987) has its fans, many of whom apparently discovered the film long after its original release. More than 20 years later and 30 years after Star Wars, an animated TV series, also called Spaceballs (2008), seems to have stemmed from this latter-day following. In any case, the original movie is pretty lifeless when compared to the writer-director-comedian's earlier glories, notably Blazing Saddles and Young Frankenstein (both 1974). There are myriad reasons for its general tepidness, but the main ones are its bad timing and Brooks' obvious lack of affinity with the genre he was spoofing.

The Blu-ray release, which also includes a copy of the April 2000 standard-def DVD release, is pleasant enough, presenting the film in the best possible light. The set is packed with extra features, but all are carry-overs from the heretofore-mentioned 2000 DVD, and especially the 2-Disc Collector's Edition DVD released in April 2005. 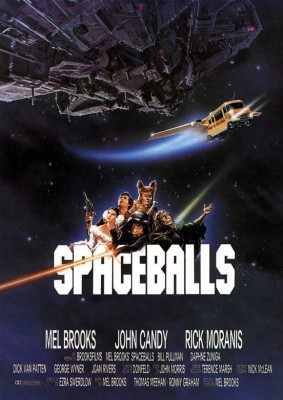 Had Spaceballs been conceived and out in theaters by the end of 1977 or during the first-half of 1978, when Star Wars mania was still peaking it might have been greeted with more enthusiasm than it was. By 1987 - ten years and one month after Star Wars's premiere - its jokes were awfully stale: for instance, a gag about Vespa's cinnamon buns-style hairstyle, which turn out to be fuzzy headphones, was of course a reference to Princess Leia's hairdo in Star Wars, but in 1987 even Return of the Jedi was more than four years old, and the long-abandoned hairstyle had already been the subject of endless jokes for years.

Indeed, there's practically nothing fresh about Spaceballs. Variations of nearly all of its jokes had been done to death in other films (e.g., 1977's crude but more original Hardware Wars) and TV shows (Saturday Night Live, etc.), sometimes better: references to The Wizard of Oz, to Darth Vader's voice, light-speed gags, robot jokes.

The big difference between this and both Blazing Saddles and Young Frankenstein is that for those films Brooks knew the genres he was parodying inside out. The team that made Young Frankenstein (Brooks and Gene Wilder) expressed an obvious affection for the Universal horror films of the 1930s and '40s, and accurately recaptured their look and occasional absurdity. Blazing Saddles was less specifically a spoof of A- and (especially) B-Westerns but Brooks, this time working mainly with Richard Pryor and Andrew Bergman, was innovative in other ways, grafting a free-for-all atmosphere not seen since the days of Olsen & Johnson with a gleeful political incorrectness made possible by the death of the Production Code.

On Spaceballs though, Brooks is slumming. One senses he had tired of genre parodies but because they tended to be more commercially successful than his other films (e.g., The Producers), genre spoofs was what the studios were willing to finance. But Spaceballs lacks the machine-gun fire, joke machine-like pace of Blazing Saddles or other non-Brooks hits like Airplane (1981), nor does it have the appealing characters and strong story that buttressed Young Frankenstein.

What Brooksian touches there are mostly come in the form of creaky Jewish humor - lots of it - which give the film an old-fashioned, a night-in-the-Catskills quality: Entering Yogurt's (also Brooks) lair, Barf notes the place "Looks like the Temple of Doom," prompting Dot Matrix's reply: "Well it sure ain't Temple Beth Israel!" Where Blazing Saddles and Young Frankenstein seemed cutting-edge (at the time) even while harking back to an earlier era of moviemaking, Spaceballs is about as hip as a Jerry Lewis telethon.

Other jokes alternate between the sophomoric (a bumper sticker on one of the spaceships reads "I Brake for Uranus") to derivative but effective (Dom DeLuise as "Pizza the Hut," literally dripping with cheese and pepperoni) to mildly clever (stranded on a blazingly hot desert planet, Lone Starr cries out, "Water! Water!" while the spoiled princess gasps, "Room service. Room service"). The best gags come at the end, including a cameo by John Hurt as his character from Alien (1979), a sequence that oddly but amusingly gives way to a variation of Chuck Jones's classic short One Froggy Evening (1953).

Spaceballs is presented in 1.78:1 widescreen, a 1080p transfer on a 50GB disc that approximates its original 1.85:1 release. Originally filmed with Panavision equipment and printed in Metrocolor, the transfer is bright and colorful, though the optical effects betray a higher level of grain. The 5.1 DTS-HD Master Audio mix is nice, but the original Dolby Stereo, also included here, wasn't bad to begin with.

The region-A encoded disc is crammed with myriad alternate audio tracks and subtitles: There are 5.1 Dolby Digital mixes in Spanish, Portuguese, and Hungarian (!), and 5.1 DTS tracks in French, German, Italian, and Castilian Spanish. Also included are subtitles in Spanish, French, Dutch, Danish, Finnish, Norwegian, Swedish, Portuguese, German, Italian, and Hungarian. Though not mentioned on the packaging, Japanese audio and subtitles are also included; my Japanese Blu-ray player defaulted to those options, as well as Japanese-language menu screens. Other language options may be hidden in there somewhere, too.

Note: The standard-def DVD is identical to the 2000 release, with a 16:9 enhanced widescreen image on side A, a full-frame version on the flipside.

The supplements, some jokey but not especially useful, all appear to be carry-overs that originated either in the April 2000 DVD or the April 2005 2-Disc Collector's Edition:

Despite its minor cult following, Spaceballs fell pretty flat with this reviewer, who laughed only two or three times over the course of 96 minutes. There are better Mel Brooks movies, better Star Wars parodies. The transfer and all the extra features, repeats though they may be, might appeal to those fond of the picture or curious about it enough to want to Rent It.