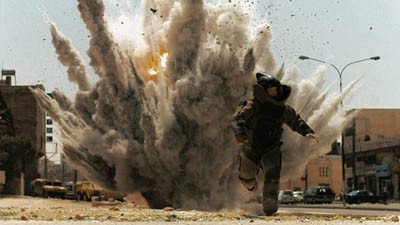 I currently have an exposed tooth at the back of my mouth that I am mostly able to live with. Every couple of days, though, without warning, it goes off. It's like someone has stuck a livewire against it, and a pain shoots through my face. If I could figure out what I did each time to make it happen, I'd stop doing that, but there is no logic to the activation. It hits when it hits, and I have to just take it. My tooth went off twice during Kathryn Bigelow's Iraq War drama The Hurt Locker, and the tension over whether or not it would happen again was nothing compared to the tension the movie inspired in me. I imagine that this tooth decay is about as close as I am going to get to the hairy situations that the Army bomb squads face over there on a daily basis, but I'd like to think it's a small object lesson for what it's like to deal with insurgent booby traps. Touch the wrong thing, move the wrong way, just look at the damn thing funny, and it might explode.

The Hurt Locker is an apolitical, boots-on-the-ground combat picture. Not once do any of the characters ever ask why they are there, not once do they discuss the wayward policies or how the war is seeming to go on forever. It's a day-to-day life, mission to mission. What's in front of you is all that counts. Bravo Company is on short time, with just six weeks or so before they are rotated back to the states, when their team leader, Sergeant Matt Thompson (Guy Pearce, L.A. Confidential, First Snow), meets with an unfortunate end. This leaves the remaining ordinance experts, the cool Sgt. Sanborn (Anthony Mackie, last seen as Tupac in Notorious) and the nervous and death-obsessed Specialist Owen Eldridge (Brian Geraghty, who also shared a place on the team with Mackie in We Are Marshal), to serve out their duty with a new comrade, Staff Sgt. William James (Jeremy Renner, recently of TV's "The Unusuals"). James has seen some time in Afghanistan, and as it turns out, he's what others call a "wild man." He'll walk into a bomb situation without fear and seemingly without thinking, breaking protocol to manually disarm the device. Worse, he also seems to like it.

James is an adrenaline junkie, but not of the woot-woot-woot face-slapping variety. His thrill goes largely unstated, and it's all the more dangerous for it. It's literally life or death for him, and as his character slowly reveals himself, it's clear he's filling some kind of hole. The plot of The Hurt Locker, provided by screenwriter Mark Boal, who also wrote the story for In the Valley of Elah, is more episodic than your standard three-act structure. Like many of the film projects that have touched on either Iraq conflict before it, including Jarhead and Generation Kill, The Hurt Locker attempts to portray a meandering battle that ends up being less about specific offensives and more about just maintaining. Unpredictable combat leads to unpredictable schedules, and particularly for a unit like this one, the call for duty comes when it comes, the enemy doesn't really telegraph their plans. 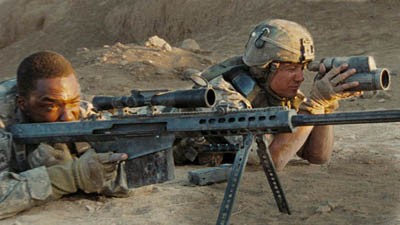 So, we go from one deadly situation to the next, each insurgent IED (Improvised Explosive Device) offering its own special challenge, including the lookie-loos that may or may not have something to do with the set-up. The men encounter British bounty hunters led by Ralph Fiennes and get pinned down by sniper fire. Both Sanborn and Eldridge start to warm up to James' daring, only to lose faith in him again. There is a mini character arc to all of them, largely focused on how they cope with what comes their way, but also touching a little on why they are there and what they plan to do if they make it out alive. All the actors are good and serve their part, though it's largely Renner's show. He never plays James as a cartoon, even when it would be easy to do so. He's a soldier with a thought process, even if it comes to him on the spur of the moment, and he feels his failures as intensely as he does his victories.

Kathryn Bigelow has always had a knack for directing action in complicated, even abnormal scenarios, be it the dirtbag vampires getting their jollies in Near Dark, surfers robbing banks in Point Break, or the cyberpunk future of Strange Days. The deserts of Iraq are no different, and its wide-open spaces combined with new technology give her plenty of room to roam. Most of the scenes were shot in Jordan with multiple hand-held cameras, documentary-style, adding to the realism of the story. It's dirty, and it's fast. Which doesn't mean that Bigelow doesn't get a chance to show some of her slick and shiny style in The Hurt Locker, it's just now the moments are chosen more carefully. She shoots an explosion the same way she shoots a killer wave. The deadlier it is, the prettier it can become.

That eerie reality means the audience can never sit and watch content in the belief that it will all work out for any of these soldiers. It's hard to tell if the days are counting down or running out, and it makes for riveting, gut-twisting cinema. The movie only misfires a couple of times. We leave Iraq twice to peek at William James' life in America, and neither time is necessary (though you will get your blink-and-you-might-miss-it cameo from Lost's Evangeline Lilly). The second trip back home gives us an explanation for James' risky behavior that's a little too on the nose, especially combined with the music video-style recruitment commercial that closes The Hurt Locker. It's a hollow note to ring out on, especially when the rest of the movie has tried so hard to keep James from being that guy. Still, I suppose it does allow us the appropriate exhale, letting us exit the theatre unclenched and walking tall again.