Pervert's Guide to Cinema, The

Microcinema // Unrated // February 24, 2009
List Price: $29.99 [Buy now and save at Amazon]
Review by Chris Neilson | posted July 10, 2009 | E-mail the Author
The Pervert's Guide to Cinema (2006) is an engaging exploration of introductory level film theory delivered by Slovenian philosopher and psychoanalyst Slavoj Žižek, and directed by Sophie Fiennes. Though the documentary is essentially a two-and-a-half-hour film theory 101 lecture, it's remarkably entertaining thanks both to Žižek's larger-than-life physicality, rich Eastern European accent, warm and energetic delivery, and keen intellect, and to Fiennes' innovative direction which puts Žižek into sets and locations closely matching those from the films under discussion. Thus, Žižek waters a lawn reminiscent of that in David Lynch's Blue Velvet, sits on the very hotel room toilet featured in Francis Ford Coppola's The Conversation, visits the actual locations featured in Hitchcock's The Birds and Vertigo, and appears in numerous set reconstructions including the space station in Andrei Tarkovsky's Solaris, Norman Bates' fruit cellar in Psycho, Regan's bedroom in The Exorcist, Dorothy's living room in Blue Velvet, and Morpheus' simulacrum of a study in The Matrix. 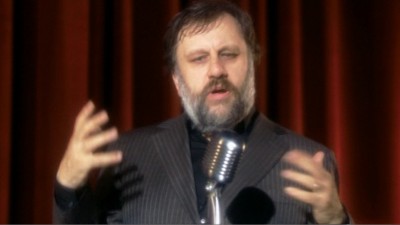 Žižek's overarching thesis is that human desires are artificial social constructions to which socialized human beings must be indoctrinated, and that cinema is the best tool yet created for such indoctrination. According to Žižek, "Cinema is the ultimate pervert art. It doesn't give you what you desire, it tells you how to desire."

Fiennes thematically divides Žižek's discursive presentation into three 50-minute segments. In part one, Žižek offers a Freudian analysis of how cinema allows us to create and experience the desires of the subconscious while simultaneously "keeping it at a safe distance, domesticating it, rendering it palpable." In part two, Žižek argues for the absolute necessity of fantasy in human sexuality to channel desire and shield against overwhelming anxiety which would otherwise prohibit copulation. In part three, Žižek argues that for human beings appearances are more important than reality, and that cinema is so engrossing and effective precisely because we know that it is illusionary.

Žižek offers a mixture of widely known and generally accepted theories (e.g., that Hitchcock is obsessed with sexual repression and domination, that hyper-sexualized father figures loom large in David Lynch films, and that the Wizard of Oz concerns the power of illusion or appearance) together with fresher or more controversial arguments (e.g., the dread produced by the scene of the overflowing toilet in The Conversation is so palpable because it confronts us with evidence of our animal natures, and Lynch's Lost Highway and Mulholland Drive are flipsides of the same story). Like fellow social critic Cornel West, Žižek frequently relies on rapid-fire, flashy and discursive presentation to make arguments that seem to resonate without being necessarily logically persuasive.

Most viewers interested in this documentary likely will be familiar with nearly all the 43 films discussed by Žižek. This choice of familiar films should help viewers comprehend Žižek's arguments more quickly and comprehensively, and may prompt viewers to go back and re-watch old favorites with new eyes though it also means that it won't prompt many new discoveries for most viewers.

Presentation
Video:
The Pervert's Guide to Cinema has excellent underlying production values which include using high-quality film clips in their original aspect ratios, but the DVD presentation is less than ideal. Though this release is anamorphic widescreen (1.78:1), it's interlaced and suffers from soft focus attributable to a mediocre PAL-to-NTSC conversion.

Optional subtitles are available in English, French, German, Japanese, and English for the hearing impaired.

Audio:
The 2.0 DD audio sounds good with no drop outs or distortions, and a dynamic mix.

Extras:
Other than detailed menus of the chapter stops, there are no extras on this release. Because these menus also serve as an outline of the topics and films discussed, I've included them here: 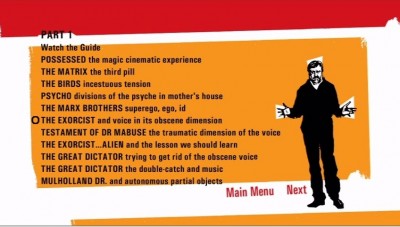 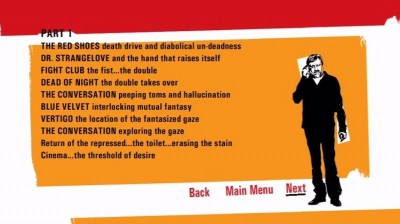 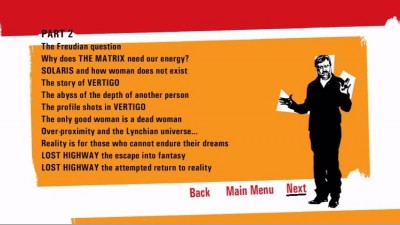 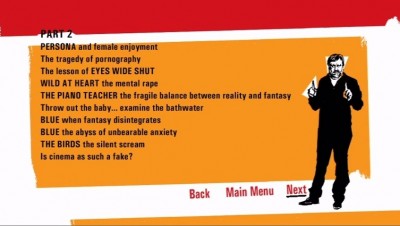 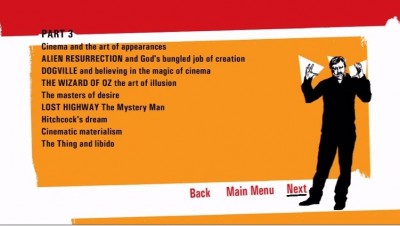 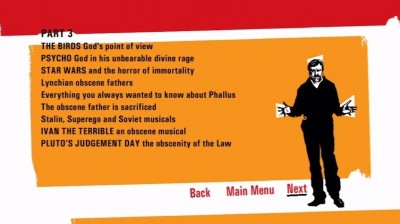 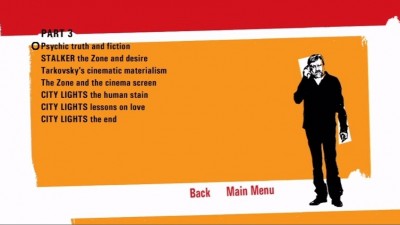 Final Thoughts:
If you regret having never taken a film theory course or did but still want more, The Pervert's Guide to Cinema provides an engrossing 150-minute lecture by philosopher Slavoj Žižek with stellar production values and innovative presentation by filmmaker Sophie Fiennes at a fraction of the price of a textbook.