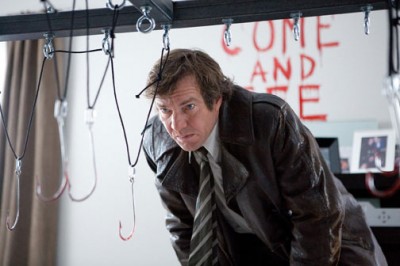 A halfhearted serial killer mix of "Seven," "Saw," and "Strangeland," "Horsemen" is the latest installment of the horror-torture genre, composed with an eye toward merging "C.S.I." aesthetics with the single-father domestic worry of an ABC Family sitcom. It's a grim picture, but utterly ridiculous; a film encouraged by its own sense of misery, though in service of a director who botches the delicate balance between procedural nightmares and familial concern.

A detective who's buried himself in work after the tragic death of his wife, Aidan Breslin (Dennis Quaid) is lost in depression, unable to communicate with his two children (including Lou Taylor Pucci). When a serial killer arrives on the scene, targeting the greater Detroit area with promises of a biblical apocalypse, Aidan is assigned the case, finding the sole suspect, a demented killer named Kristen (Ziyi Zhang, hopelessly miscast), holds disturbing clues to further victims. Entering the fetish underworld of Suspension, Aidan works around the clock to crack Kristen's elaborate codes, hoping to avoid further bloodshed by educating himself on the killer's ambitious inspiration: the Four Horsemen of the Apocalypse.

Director Jonas Akerlund assembles a dynamic aura of panic for "Horsemen" that, for the initial 45 minutes, finds a special rhythm of pleasing despair. Utilizing desolate winter locations (welcomingly balancing out the pedestrian acid-washed cinematographic manipulations), Akerlund captures a chilled air of dread that's incredibly satisfying, promising "Horsemen" has something shocking up its sleeve that will separate it from the rest of the tiresome serial killer genre.

Unfortunately, "Horsemen" doesn't have any unique plans in mind. Outside of one marvelous reveal of a dead fetus, the film is pretty much devoid of scares or compelling turns of suspense. Considering his last picture was the intentionally insufferable meth comedy "Spun," it's a surprise to see Akerlund dial down the volume on his directorial choices. The passivity is encouraging, but the results are muddied, with the filmmaker mistaking lurid detail for persuasive storytelling.

The screenplay by David Callaham ("Doom") lurches for a biblical tone that bleeds into sadism, creeping around the world of body modification to pack a case of the icks inside the film. While it gives the killer plenty to work with (bodies are hung by fishhooks, with exact medical incisions leading to a slow death), it confuses the focus of the writing. Once the Four Horsemen symbolism shows up to consume Aidan's investigation, the mixture of biblical promise and psychosexual anguish forms a tedious whole, sending "Horsemen" down a thematic tangent it never recovers from, and one that's awfully tricky to discuss in a review due to a minefield of spoiler material.

To be fair to Akerlund and Callaham, "Horsemen" has the appearance of a second-guessed film, with subplots condensed, character introductions shortchanged, and psychological strands cut in half. The film limps to a conclusion, and the lack of energy feels like the work of a nervous producer who thought he was funding "Saw 17," but received a semi-complicated character study instead.

Presented in anamorphic widescreen (1.85:1 aspect ratio), the "Horsemen" image quality shines with outdoor photography, capturing the frigid conditions of the Michigan locations (aka Winnipeg) superbly. Detail remains consistent, with strong black levels keeping the tension somewhat aggressive. Colors are generally muted by choice, though red (a popular hue) is preserved well. Skintones are stable, and detail is quite active.

The 5.1 Dolby Digital sound mix here is lively with genre ambiance that typically revolves around a few boo scares and general creepiness. Surround activity is generous with horror sequences, and the mix keeps the dialogue fresh and crisp with no discernable distortion. A flat 2.0 mix is also included.

English and Spanish subtitles are available.

A feature-length audio commentary with director Jonas Akerlund and cinematographer Eric Broms hits on one major point repeatedly: it was a cold shoot. These self-described "boring Swedes" really don't have much to add to the "Horsemen" experience other than basic production stories and talk of script changes. Akerlund seems very proud of his movie, and his interest in the story is evident throughout the track. Talk of major reshoots isn't given nearly the clarification it should, but the duo manages to survey some of the stranger narrative tangents. It's a dry track, but has a handful of informative moments.

"Deleted Scenes" (11:40) are actually quite enlightening, helping fill out character bits and pieces are that missing from the finished film. Definitely worth a look after viewing the feature, just to see what was gutted to maintain a swifter pace.

Again, without giving too much away, "Horsemen" eventually reveals it's not about the scares, but the wrath of a neglected generation. It's an absurd denouement, especially with all the bloodshed, agony, and torture that precedes it. It's like trying to pick your teeth with a javelin. Sharp viewers will be able to spot the final twist a mile away, but the shocks are truly secondary to the sheer ludicrousness of the ending, which moves "Horsemen" from an interesting misfire to an embarrassing mistake.