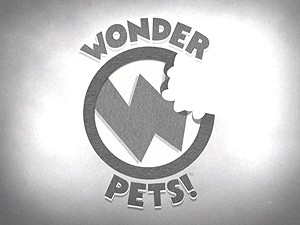 
The Story So Far... The Wonder Pets, made up of Linny the guinea pig, Tuck the turtle and Ming Ming the duckling, are a trio of classroom pets who respond to baby animals' distress calls, using teamwork to save the day. The animated Nickelodeon series, aired on Nick Jr. and Noggin, has had several DVD releases, and DVDTalk has reviews of five of them available here.

The Show
If there's one element of The Wonder Pets that I don't enjoy, it has to be Ollie the bunny, a bratty rabbit who's the antithesis of everything the 'Pets stand for, namely teamwork. To Ollie, he's the center of the universe, and it's his way or the highway. It's the kind of mindset and behavior that you never want a kid to emulate, put right in the center of a show for kids. Sure, he gets his comeuppance at the hands of the Wonder Pets, who succeed at their goals despite his distracting presence, but he never learns. He's just too thick. 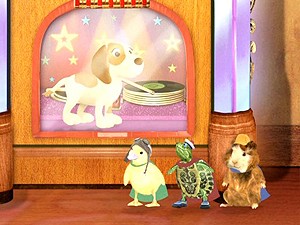 So when I get a disc where Ollie's front and center on the cover and in the title, it didn't make me feel the need to watch the DVD, especially when I saw for once the theme is actually partially followed for once on a Nick DVD, as there's not just one, but two Ollie episodes, one where he annoys the 'Pets after inviting them to a sleepover in his hole, and another where he gets lost in a magic hat and berates the trio for being unable to find him. To top it off, Ollie has a compatriot in Tuck's cousin Buck, who's totally extreme to the max, and also gets his own episode in which to be a jerk (though he is more open to learning.) If you take those three stories out of the mix though, there are still five solid episodes remaining to enjoy, which show off how the creators adapt the concept in order to keep things fresh.

The show's use of music is one of the best parts of the series, and "Save the Hound Dog" and "Save the Cool Cat and the Hip Hippo" are examples of how well song and melody are integrated into the show. If you can't guess how music works in "Save the Hound Dog," you have some catching up to do, as the many Elvis references will fly right over your head, while jazz is the language in "Cool Cat and the Hip Hippo," even altering the sound of the show's signature songs to mimic jazz's style. It's similar to the way to visual boilerplate of the show is changed to match closer to the themes in "Help the Monster," where an old '50s monster-movie aesthetic accompanies an attempt to calm a rampaging baby beast, and "Save the Dancing Duck," which pairs Ming-Ming's ballerina battle with a choreographed set of opening titles. Only "Save the Dalmatian!," with a Dalmatian puppy scared to go down a fire pole, feels like a traditional Wonder Pets episode, which isn't a bad thing at all.There's just such a sense of creativity at work that you can't help but feel it's a positive influence on young viewers (as long as Ollie or Buck aren't around.) 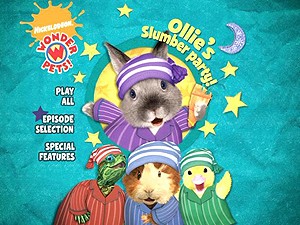 The DVD
Packed in a standard keepcase, the disc has a static full-frame main menu, with options to watch all the episodes, select shows and check out the special features. There are no subtitles or audio options, but there is closed captioning.

The Quality
The full-frame transfers on these shows look great, with a clean image that features bright, bold color and a good level of fine detail. There are no obvious concerns about dirt, damage or digital artifacts.

The Dolby Digital 2.0 audio is as good as ever for this show, presenting the crisp dialogue and swell-sounding music quite nicely, but as you'd expect from a kids show like this, there nothing dynamic about the mix, which offers up clean, center-focused sound.

The Extras
Aside from some the usual commercials for other Nickelodeon DVDs, there's just one extra, a video from the "Here's Ollie!" episode, where he sings about his home. Basically, it's a chapter stop for the scene. 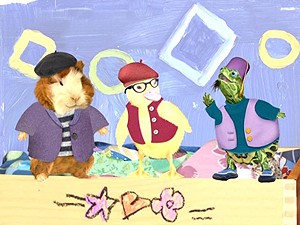 The Bottom Line
Not every episode of The Wonder Pets is going to revolution kids television, but frequently you'll see them raising the bar ever so slightly higher, as is the case with several episodes here. The DVD is more of the usual though, sporting a nice level of quality also, but lacking in extras, as is tradition for Nickelodeon DVDs. As is normally the case with these discs, it's hard to recommend purchasing just four episodes, but you could do a lot worse than this one.